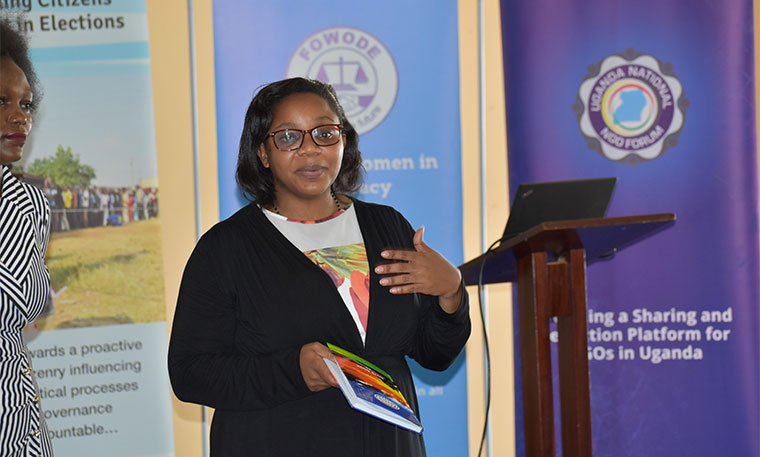 Female parliamentarians have decried the growing financial burden of constituents on their purses. These concerns were raised at a 3-day retreat organized by the Forum for Women in Democracy for first time female MPs under their strengthening citizen’s engagement in elections programme held at Lake Victoria Hotel Entebbe.

The MPs say whereas some of their male colleagues are reelected without becoming charitable to their constituents, they are forced to contribute the larger portion of their purse to the constituents to buy their way back to parliament in the next polls.

Speaking on the sidelines of the training, Kassanda District Woman MP Flavia Kalule says there should be constant sensitization of the voters about the role of parliamentarians since they are not in charge of direct service delivery.

“What we can do within our power is to lobby private partners and government to fill the service delivery gaps within their constituencies…” said Kalule.

Elizabeth Ampaire the programmes director of FOWODE says the retreat was organized specifically targeting first-time female parliamentarians to conscientize them about the true roles of a member of parliament.

She adds that after the retreat, the female parliamentarians shall be able to nurture a value-driven and transformative leadership, and also encourage them to establish a safe space for sisterhood and solidarity for sustained engagement.

Ampaire says they appreciate the highly commercialized nature of Uganda’s politics where some women leaders have been forced to become more charitable yet their purses cannot fulfill the demands of the community.

“…as FOWODE, we acknowledge that our female legislators face this challenge and we also appreciate that constituents are poor. We want them to acknowledge their roles as legislators. We are helping them realize that the needs of the constituency are insatiable. Let them focus on legislation…” said Ampaire.

Ampaire adds that for legislators to succeed in their roles, they should build networks amongst themselves and also strengthen partnerships with different civil society organisations in line with the interests of their constituencies.

“…these CSO’s already have necessary information that the MPs need. Let the MPs go to these CSO’s and the media shall then help them to build their brand as a good representative for the interests of the people…” Ampaire.

Solome Nakaweesi the lead facilitator requested women to assert themselves in their positions as leaders of the people. She requested the female parliamentarians to indulge themselves in collectively handling societal issues as it is the best means of dealing with society.

She adds instead of female parliamentarians having political power, they should go an extra mile of getting economic power which shall grant them more independence while making decisions. She also cautioned the parliamentarians.

She added that the parliamentarians should read through the feminist charter and report so they can see what speaks to their leadership as parliamentarians. “…as leaders, you should deliberately walk the journey of working on yourselves. We need leaders that will commit to something and then work upon it…”

Speaking at the same event, Prof Josephine Ahikire requested that society deals with the barriers to gender equality. She adds that a levelled playing field for all helps to ensure a better society that shall be favourable for all.

+8 #1 WADADA rogers 2021-10-20 16:41
What were they thinking when they were promising that they would build schools, buy a standby constituency ambulance, build churches and mosques, build health centers, fixing bridges, constructing roads, paying school fees among other empty promises, now is the time to fulfill those promises without crying
Report to administrator
0 #2 kabayekka 2021-10-21 02:39
WADADA rogers you have a point. These parliamentarians make a bigger part of NRM now 35 years and counting.

They have been digging their own hole. They are starting to fall in it!
Report to administrator
0 #3 Lakwena 2021-10-21 10:29
In other words, by creating more constituencies and Districts, mischievous Gen Tibuhaburwa has handed them MPs, the favorite proverbial bankrupting "White Elephant".

For starters, the term 'white elephant' refers to any burdensome, expensive and useless possession that is much more trouble than it is worth.

That is, Gen Tibuhaburwa loves Uganda as a personal property, but not Ugandans whom he despises, when e.g.; on 26th Jan 2017 told them off that he is not their servant nor employee.

Hence with so much ease and glee, mischievously creates more Districts and/or counties and leaves the MPs trapped in a catch 22 dilemma, with the inescapable burden of providing social services at their own peril.

In other words, not all that shine in parliament is gold