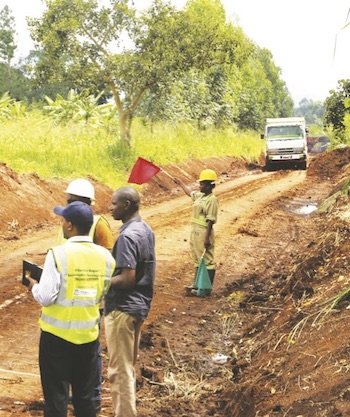 Road works on the Bulindi-Waki-Dwooli road

A red flag has been raised over an oddity in the ongoing construction of the Shs 770 billion, 159-kilometre Masindi Kisanja-Tangi-Paraa-Buliisa road, being built by Chinese firm; China Communications Construction Company Ltd (CCCC).

There are serious issues that have cropped up after the termination of the external consulting engineers. In the fall-out, and in a briefing to President Yoweri Museveni seen by this newspaper, spotlight has been shined on a move by the contractor; CCCC to adjust one of the pavement sections in package one of the road from 810mm to 550mm, a move that has been flagged as dangerous because the final road will not be able to withstand the pressure from traffic expected on the road.

According to the briefing to President Museveni seen by this newspaper, the move also means that the contractor is able to save about $40 million (approx. Shs 144 billion), but surprisingly, the supervising engineers at UNRA approved the contractor’s request to amend the pavement structure without amending the changes in cost.

Officials at the Uganda National Roads Authority (UNRA), who are the employer of Chinese contractor- CCCC, and the new supervising firm, PROME Consultants Ltd, are blamed for turning a blind eye to this anomaly after UNRA, surprisingly replaced the original supervising engineers from Kuwait-based, Abuljebain Engineering Consulting Office (AECO) with PROME Consultants Ltd, a local firm.

Both UNRA and the CCCC have denied any wrongdoing.

Interviewed for a comment on October 15, Allan Ssempebwa, the UNRA spokesman, insisted the road thickness has not been changed by the contractor.

“Everything is being done as per the contract, save for the width on the sections in the park [Murchison] where UWA advised us to reduce the road by one metre to save the wildlife there,” Ssempebwa said.

Another issue coming up, was that the contractor has interred two ghost bridges in his final payment request and has inflated vehicle prices in his bill of costs to USD 900,000 per vehicle, but Ssempebwa acknowledged there had been ‘some errors but they have since been corrected through a change order.’

For instance, he said the cost of each vehicle was revised down to $90,000 from the originally quoted 900,000. Officials at CCCC in a response said: “The contractor actually provided a stronger pavement by increasing the Asphalt Concrete and the subgrade thickness. We all know the Asphalt Concrete is the most expensive work in road construction; hence the cost for the pavement is actually increased to 7 million USD instead of saving. But because this contract is lump sum, CCCC has to bear all the increased cost”.

The officials conceded that some sections of the road had failed but explained:

“It’s true that we observed some minor cracks on the road, and the cracks are mainly at the edge of the shoulder, after careful study we believe that the cracks are because of the differential settlement at the joint of the existing road and the new constructed road. To mitigate this defect, we put some fiberglass geogrid before laying the Asphalt Concrete. Fiberglass geogrid is an expensive material but can effectively mitigate the defect, but in order to give a better road for Uganda, CCCC provided it without extra cost from UNRA”.

On bridges, they said: “There are 7 bridges on the road. Six small bridges and Paraa Bridge. Paraa Bridge is 520m long with 13 spans of 40m T girder. We call the other six bridges “small” but actually they range from 18m-30m, which are the middle size bridge in Uganda. The total cost is about 35 million USD for all the bridges. If we compare them with other projects in Uganda this money might only be enough for 2 bridges”.

On vehicles, they said: “We bought 11 vehicles for the Engineer at a total cost of about 500,000 USD. There are also about 700,000 USD for three years of service for these vehicles including fuel, maintenance of the vehicles and, salary for the drivers. Considering the fact that our project is more than 150km long, those cars run an average of 300km every day. That money can only cover the cost of the fuel”.

On August 19, 2020, UNRA controversially terminated AECO’s contract as the project supervising engineers and replaced them with PROME Consultants Ltd.

Ironically, PROME had been sub contracted to provide manpower on the same project in November, 2018 as one of the local contractors. In the termination letter, UNRA stated that AECO failed to mobilize staff, make monthly reports and refused to approve the contractor (CCCC)’s submissions and instructions in time, among others.

In a petition to President Museveni, however, AECO executive director Wail Khaireddin Abuljebain dismissed UNRA’s claims as false, arguing that they terminated for ‘convenience and not non-performance. For instance, Abuljebain notes that the executive director of UNRA Allen Kagina visited the site several times and was always ‘very satisfied’ with their performance.

“On her last visit in 2020, she told our Resident Engineer Mr Aymman Khair that UNRA had no problem with AECO on this project of the Oil roads,” he stated in the petition to the president.

He added: ‘The irony lies in the fact that after termination of AECO, UNRA is currently finalizing the project using 99 per cent of the staff members of AECO except for the resident engineer who left for Sudan.”

In the genesis, UNRA had stuck to implementing the original pavement design, which put thickness of the road at the standard (T8) ideal for heavy-load oil trucks.

For instance, in a letter, dated October 18, 2018, Engineer Alfred Ogik, UNRA’s director Roads and Bridges Development, then, rejected CCCC’s proposal (in a letter on August 16, 2018) to reduce the road overall material pavement depth from 810mm (T8) to 550mm (T6).

In his response to CCCC’s proposal, Ogik wrote: “Please note that, according to Chapter 10 of the South African Pavement Engineering Manual, the recommended minimum pavement thickness for a category B Road is 800mm in order for the pavement strength to be sufficient to withstand the traffic-imposed stresses.”

It is worth noting that Ogik has since been replaced by Engineer Samuel Muhoozi. Ogik is now head of UNRA’s Road Development.

Before Ogik’s rejection, there was an earlier warning against CCCC’s proposals to alter the road’s material pavement structure original designs.

In a letter written on August 18, 2018, Christopher Manyindo, the then UNRA’s head Roads Development, stated that CCCC’s reasons to alter the pavement structure were not convincing.

Manyindo argued that CCCC’s proposed pavement design was not ideal for Sub-Saharan conditions and could not withstand the projected heavy-load vehicles that will be using the road once completed.

“Therefore, the purpose of writing is to inform you that in the absence of necessary justification, the reference pavement structure submitted as per Employer’s requirement in the Contract should be maintained,” Manyindo concluded.

However, in the final letter, UNRA cleared CCCC to go ahead with T6 material pavement, which technically not only poses a big threat to future users of the road but is also a big financial loss for the government.

There is also controversy on the two bridges, presumably constructed on Lot 7B, the 12-kilometre stretch between Sambiya and Murchison Falls.

“This is an uphill stretch with no swamps, no rivers so there’s no need to build bridges here yet the contractor (CCCC) quoted in the Bill of Quantities (BOQ),” the whistleblower reveals.

And if, indeed, these non-existent bridges are approved, with each costed at $2million, UNRA will pay the contractor $4million for ghost bridges.

According to the briefing to the President, CCCC bought 12 vehicles (ten pickup trucks for field work and two Prados) for the project, with each quoted to have cost a whopping $900,000 in the bill of quantities. In comparison, the market prices of new Toyota pickups (double or single cabin) range between $45,0000 and $80,0000.

The Masindi (Kisanja)-Park Junction-Tangi-Paraa-Buliisa road is one of the multibillion oil transport infrastructure projects, which the government signed off since 2008, to facilitate oil production and development in Uganda Graben region.

After securing a loan of Shs 770bn from the China Exim Bank, Chinese firm, CCCC, started constructing the 159-kilometre road in April, 2018.

According to the original contract projections, CCCC was expected to complete the road next month. How- ever, there have been challenges such as delayed payments and the prolonged lockdown due to the Covid-19 pandemic, which slowed down CCCC and the sub contract works on the road.

Currently, officials put physical works progress at 77 percent and admit that UNRA is at risk of paying interest accumulated because of the aforesaid delays.

Once completed, the road crosses, which connect three districts (Masindi, Nwoya and Buliisa), are expected to bring about economic transformation for the local people due to improved access and businesses developing along the way.

+2 #1 Zaitun 2021-10-20 16:27
Bloody thieves, that is all what these guys are! Ugandans and their external friends can not leave the poor in peace, but always inreasing financial burdens on their back.

What do some of these men, the likes of Allan Ssempebwa, think? That they could do such a thing, (shielded stealing) in China if those were Ugandan engineers constructing a road in China?

You call yourselves responsible people, but there you go underdevelopping the country.

You have no shame just like your President! Uganda has now become a cow to be milked to death!!!
Report to administrator