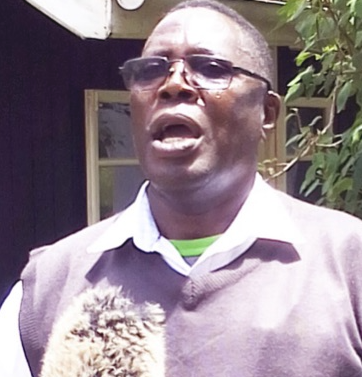 Dr Aziz Ponary Mlima, Tanzania’s high commissioner to Uganda, presented to him a plaque, a Kiswahili dictionary and a set of books written in the language as a token of appreciation. This was at the commemoration of Mwalimu Nyerere day, October 14 held at the Julius Nyerere Leadership Centre (JNLC), Makerere University.

Kalyango is also a Kampala-based journalist that can be hired at will. Kalyango, 61, told The Observer the award means a lot to him because it reminds him that he is a good beneficiary and apostle of Julius Nyerere’s educational policy of Africanisation.

Kalyango had his primary education in Tanzania in the 1960s where he stayed with his parents, returning to Uganda in 1972. He said he has also worked on joint projects of UBC and Tanzania Broadcasting Corporation (TBC) in Kiswahili language.

Mlima, who was the chief guest, also donated to JNLC three big flags – Uganda’s, Tanzania’s and East African Community’s – a Kiswahili-English dictionary, a set of books in English and Kiswahili and many framed photos about Nyerere’s life.

Dr Suzie Nansozi Muwanga, executive director of the centre, said the centre concept was an idea of President Museveni, but it is being implemented as a joint project of Makerere University and Uganda Management Institute (UMI).

Its eight-member board comprises three from Makerere, three from UMI and two outsiders. It is conceived as a think-tank centre of excellence in servant leadership and ideological discourse, in honour of Nyerere’s contribution to freedom and national liberation, peace and reconciliation, unity and social cohesion, solidarity, and development of Africa.

Museveni is the patron of the centre; he officially launched it in October 2018 as president of Uganda. Muwanga told The Observer the centre has not yet acquired big funding, but has managed to renovate the building where it is housed and lay down a solid strategy.

Despite Covid-related lockdowns, the centre has managed to launch an activity programme of popularizing itself to Tanzanian students in Uganda, and outreaches with a number of organisations such as the association of Tanzanian women living in Uganda.

The centre has also inspired formation of a Swahili club at Makerere under the Languages department. It also launched a post-election review programme under which analytical studies are still ongoing.

Nyerere was not only an alumnus of Makerere, but also the chancellor of it when it was known as the University of East Africa from 1963 to 1970. At that time, the UEA comprised Makerere and the university colleges of Dar es Salaam and Nairobi.

Mwalimu Nyerere day is an annual public holiday in Tanzania, recalling the death of the ‘Father of the Nation’ on October 14, 1999 and honouring his legacy of pan-Africanism, promotion of Kiswahili language and unity of the 120 ethnic groups of Tanzania.

Muwanga said the high commission had not celebrated the day for two years, but decided at short notice to hold it at JNLC, as a quiet low-key function.

Nyerere studied education at Makerere University, after which he taught in Catholic schools in Tanganyika for years before joining activism for political independence and later becoming the first prime minister of Tanganyika on independence in 1961.

In 1963, he became the first president of Tanganyika; when Zanzibar underwent a revolution and became independent in 1964, a union of the two countries was negotiated and Nyerere became its first president.

Nyerere relinquished the presidency in 1985, but remained chairman of the ruling Chama Cha Mapinduzi (CCM) party for five more years. By the time of his death, Nyerere had become such a central figure of Tanzania that many people could not imagine a Tanzania without him. Presently, Nyerere is being considered for canonization as a Catholic saint.

Reacting to observation and request by Mlima and Dr Sallie Simba Kayunga that Makerere should have a hall of residence named after Nyerere, Prof Sarah Nabukenya, deputy vice chancellor, Finance and Administration, said university management will ensure that the upcoming hall for postgraduate students will bear Nyerere’s name.

The occasion also had documentaries about Nyerere and speeches by a number of leaders of Tanzanian students in Uganda and Ugandan students in Tanzania. Lillian Mpundachuma, general secretary of Tanzanian Students Association in Uganda (TSAU), was the master of ceremonies.