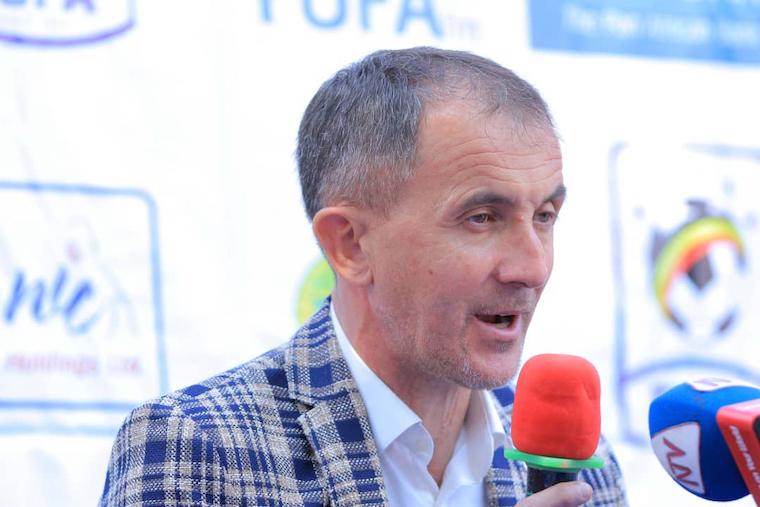 Micho who returned to Uganda in July this year for his second spell was tried today in the Gqeberha (formerly Port Elizabeth)  Regional court, South Africa which sentenced him to two separate terms, both of which have been suspended for five years.

He had appeared at the New Brighton Magistrate's court on the same charges in December 2020. Court heard that the Serbian tactician teased a woman who was serving coffee constituting an offence under South African law.

In a statement, National Prosecuting Authority (NPA) said that a woman was allegedly assaulted on Monday, 7 December 2020 in Port Elizabeth where he had gone to attend the U-21 Afcon qualifiers in the Wolfson Stadium, South Africa

"A 39-year-old woman was delivering coffee at the Wolfson stadium when she asked Sredojevic if he would need sugar with his coffee," it read. "He allegedly said no and disclosed that he needed another type of sugar while pointing at her private parts. It is alleged that the lady complained to her boss, who in turn warned Sredojevic not to do it again.

"Later on that day, the lady went to deliver coffee again at the same stadium and this time Sredojevic allegedly touched her in an inappropriate manner," the NPA regional spokesperson Anelisa Ngcakani. At the time, Micho was head coach of the Zambian national football team commonly known as Chipolopolo after he had parted ways with the Orlando Pirates in South Africa.

Micho had denied the charges that surrounded two incidents, but the court found him guilty. For count one, he was sentenced to three years imprisonment which was wholly suspended for five years on condition that he does not again contravene section 5(2) of the Sexual Offences Act.

The section entails sexual assault in the form of inspiring a belief unto the complainant that he or she will immediately be sexually assaulted.

For count two, Sredojevic was also sentenced to three years imprisonment which was wholly suspended for five years on condition that he does not again contravene section 5(1) of the Sexual Offences Act which entails sexual assault in the form of touching a complainant.

The development means that the Serbian tactician should NOT be found guilty of a similar offence in the next five years. If he commits a similar offence, he will be arrested with immediate effect and required to serve the sentence in jail. The Serbian coach has immediately appealed the ruling.

A statement by Uganda's football federation (FUFA) indicates that the 52-year-old coach will carry on his duties with the Cranes. According to FUFA, the tactician asked FUFA permission to attend the private matter in the South Africa but the matter was sorted and the gaffer is expected to return to Uganda.

“The Uganda Cranes coach Milutin Sredojevic asked FUFA for permission to attend to a private matter in South Africa. We have this afternoon received information that the private matter has been concluded for now. The coach will come back to resume his duties accordingly,” reads a statement from FUFA.

Come on judges ,you are crazy.Wake up and look around Micho was just joking in his customery fashion since probably this kind of attitude is normal in his native country

He has eyes to see and brain to think.
Ludocracy of South African judges
Another attack was at another great Serbian works champion Novak Djokovic Last year his tennis ball just seerdoff and touched one evil US line lady who was so vicious and full of hate for the Serb Greatest Ever tennis player Djokovic that the judges suspended him from the tournament
Obviously the West is jelioys and hate Serbs
Pitty Serbia has lots of great and excellent sportsmen.!

They can only envy and hate these Slavic legends.
Telling the lady that she is pretty, so what??
Report to administrator
-1 #2 Dannick 2021-10-20 13:08
In a serious country, he would be in trouble with immigration. Possible visa cancelation and subsequent deportation.

Hopefully, UG will not have to play in S.A anytime soon.

FUFA should monitor MIcho closely, in case he gets distracted from his job. Support him as much as possible but make sure the team is not affected.
Report to administrator
0 #5 Wainanchi 2021-10-22 20:45
@ The Ugandan. Thank you! Micho is simply normal and mentally healthy guy He was just joking while others are killing.! Which is better?

Come on Micho !! Do not give them another chance.

They hate you and your brothers and are jellous
Show them what you can achieve, and you will I am sure..Forward Mr Micho Uganda Cranes and Uganda live you dear brother!!
Report to administrator