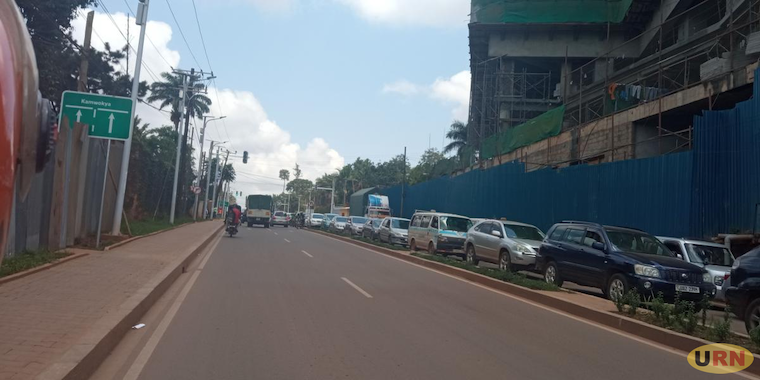 Motorists expected a smooth ride on the newly built John Babiiha Avenue, also known as Acacia Avenue to replace their experience of the old narrow and potholed road.

However, as Kampala Capital City Authority (KCCA) fully opens the road to traffic, it has become a scene of gridlocks with the situation worse than before during peak hours. There are four new signalization junctions (traffic lights) from Fairway to Kamwoya, installed at the lower Kololo terrace, Masaba terrace, Upper Kololo terrace and Mabua road.

Vincent Ahimbisiwe, a taxi driver plying the Kampala-Ntinda route, blames the gridlock on the newly installed traffic lights, which he says are creating chaos on the route. Primarily, traffic lights are supposed to ease congestion and create order on the road.

However, Ahimbisiwe says that once the light turns green, traffic begins to move but by the time the moving traffic reaches the next light, the signal is still red which disrupts the traffic flow.

Sharing his experience, Simon Wambede has noticed that KCCA is placing traffic lights at every junction on the road creating unnecessary stops that later create jams on the 2km stretch from City Oil petrol station in Kamwokya to Fairway hotel junction.

Wambede says that during peak hours, someone can spend over an hour to cover that short distance, which was not the case before the lights were installed. Motorists also add that the congestion on Acacia spills over to other roads, which link to this route.

Hassan Sabaiga, says that Old Kira road, Mawanda roads and City Oil junction are affected whenever there is gridlock on Acacia. Sabaiga says that in many areas, traffic lights have ended up becoming part of the problem other than a solution.

KCCA deputy director roads management Eng Jacob Byamukama acknowledges that the traffic confusion on the road. Byamukama, a traffic engineer, says that before the lights were installed, they studied the traffic flow on the road and installed the signalization junctions to control traffic flow from Kololo, Naguru and town.

"If you don't respect the red [light], the possibility of getting crashed is high because priority would have been given to those moving," Byamukama said.

Byabakama explains that KCCA is still testing the lights and that is why there could be some gaps in operation hence affecting the flow of traffic. He says they plan to apply a synchronization software program that can be used to retime traffic systems and permit for coordinated operation of the light and hence easy movement.

"The main thing really is to make sure they are synchronized, I don't want to be too technical but synchronizing means that when this light gives you green, then also when you reach the next light, it gives you green and the next one gives you green. We're also working with Umeme, and this even a request here in public to Umeme that we need clean power. The gadgets that we're using, these controllers need clean power to come through. Yes, they might have batteries to save the power but still, we need clean power to come in such that all the junctions can be on. It would so so funny to have junctions which need to be working together and one doesn't have power. So you can see," said Byabakama.

Byabakama says the lights shall be timed according to traffic patterns on the road. He further revealed that the KCCA has plans for a central traffic control center, which they shall use to monitor and guide operations of all signalization junctions in the city.

Roads engineer Andrew Niwamanye, says that the lights are necessary but adds that they should coordinate to enable smooth traffic flow. He explains that the traffic flow on feeder roads and other highways inform the time given for vehicles to move. He emphasizes the need for traffic lights at every junction as a way to manage traffic flow.

These African cities have had enough of speeding, drunk-drivers, the city polluters and all that lot. One now pays an automatic charge of about 70,000 to drive through the middle of the international city of London during working days. Unfortunately for the international city of Kampala the wiser international environmentalists are knocking on the doors of this lovely tropical city to show the plan for mass public transportation of this city for the good of the environment for at least 50 years to come.
Report to administrator