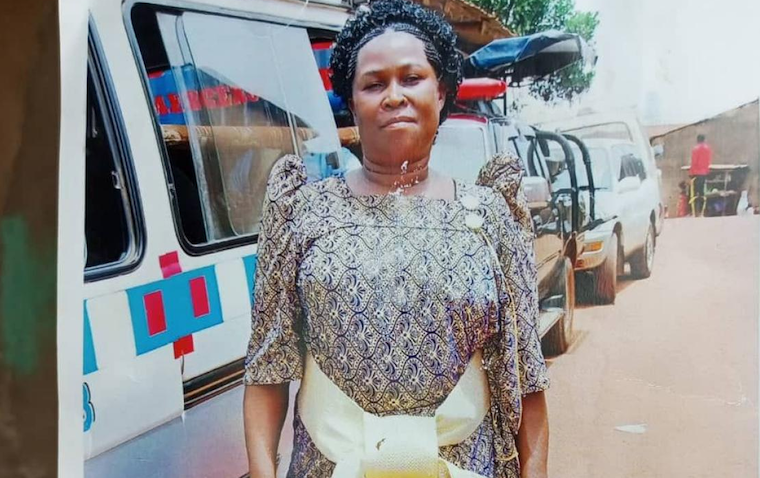 Aisha Nakitende, one of the victims

Fear has engulfed residents of Nsuwa zone in Katwe after machete-wielding men hacked Aisha Nakitende alongside her daughter Olivia Namatovu, in the wee hours of Saturday morning.

Nakitende, according to neighbours, was attacked about 10 minutes to 6 am during the morning downpour. At the time of the attack, Nakitende had woken up early to do laundry, and was planning to attend to her food kiosk which is about a kilometer from her residence.

Sharon Namubiru, a neighbour in the opposite rental, said she woke up at 5:45 am to collect water as it had started pouring but found Nakitende already on her veranda washing clothes. URN found three basins filled with clothes that Nakitende was washing minutes before she was attacked.

When the badly injured Nakitende was sighted in the trench just opposite her home, the locals decided to alert her daughter since the house was open. To their shock, they found Namatovu also in a pool of blood-fighting for her life just like the mother.

“I looked at my phone and it was 5:45 am," Namubiru recounts. "I left her my bucket to fill with water as she was still washing her clothes, shut my door and went back to bed. I was shocked after it had stopped raining to see people gather around Nakitende in a trench.”

Nakitende and Namatovu were hacked several times in the head, back, legs and other body parts. Police from Katwe picked the two victims who were in critical condition and took them to Mulago hospital for treatment.

This is the third incident in Nsuwa zone and Nawanku zone in a space of two weeks. The first incident involved Tracy Nakanwagi and Shakira Nansamba who were cut and dumped near their homes.

Nansamba was only four years and died while Nakanwagi had just marked her eighth birthday and is still in the intensive care unit. The defence secretary Muhammad Konde, has attributed the crimes to the laxity of police in patrolling their areas.

“Police have not helped us," Konde said. "They do not patrol these areas in the night. We have people who keep walking in this place throughout the night and we cannot stop them. We are armed only with sticks and we don’t know what they are carrying in the night. We are overwhelmed as leaders. Locals wake up early going for work and they are often attacked. We need security."

Luke Owoyesigyire, the deputy Kampala metropolitan police spokesperson, said the detectives were doing whatever possible to identify the attackers. Police said they are working with area chairman Badru Kateregga to ensure a solution is reached to avert similar incidents.

These terror actions are done by lunatics and once they are captured they should be executed after speedy trials and hanged.

Just as we are hearing about these horrible deadly attacks at innocent people ,we are cheering NRM caucus which scraped Bail for suspected terrorists and killers.

Once they are caught they should be tried and with proven evidence executed so that no person will try to terrorise and kill Ugandans !

No bail for killers and terrorists ! Death sentence for every terrorist and killer.

America is silent,only we hear complaints from Europe .Death sentences are order of the day in many countries no question about it!
Prisons for corrupt judges!!!
Report to administrator
0 #3 Lakwena 2021-10-19 09:45
But what is the cause of these apparently grizzly and bloody machete murder cases?

In other words, according to the law of "cause and effect"; if the victims are indeed innocent, then the country could be dealing with a politically motivated dark underworld, backward animist, voodoo ritual murder (human sacrifice), concealed in the crime of murder.
Report to administrator
0 #4 Lakwena 2021-10-19 09:53
Quoting Wainanchi:

Uganda read this and remember.

These terror actions are done by lunatics and once they are captured they should be executed after speedy trials and hanged. ...

Once they are caught they should be tried and with proven evidence executed so that no person will try to terrorise and kill Ugandans !

No bail for killers and terrorists ! Death sentence for every terrorist and killer. ...

But Wainanchi, you and Bloody Gen Tibuhaburwa came to power through treason, terrorism, organized murder, bank robbery and everything criminal. Moreover you continue to hang onto power through "Guerilla Tactics" (criminal tactics).

In other words, what moral authority do you have to condemn fellow criminals? You could be the ones,authoring and masterminding the current mysterious systematic murders.