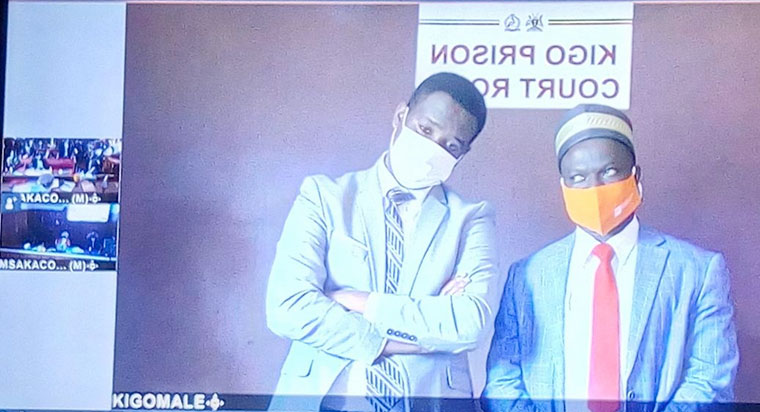 The MPs in the dock earlier

High court justices are now shying away from hearing the bail application of MPs Allan Ssewanyana and Muhummad Ssegirinya following anti-bail comments by President Yoweri Museveni according to their lawyer, Erias Lukwago.

Museveni recently castigated the courts for granting bail to suspects accused of capital offenses like murder and terrorism - similar cases that the MPs are accused of.

Last month the duo was granted bail by the Masaka High court judge Victoria Nakintu Nkwanga Katamba but were rearrested shortly after they were released from Kigo prison.

Before getting bail, the two MPs had been arrested and charged with terrorism, treason, and murder associated with themachete (bijambiya) killings in the Masaka sub region that left about 30 people mostly elderly dead. With fresh charges slapped against them, the MPs reapplied for bail but Lukwago says they are failing to make headways with the application.

"Unless you believe that Ssewanyana, Ssegirinya went to Lwengo, went to Masaka and hacked people to death. Unless you believe that [but] even if they have done so, the law grants them that right to be treated innocent until proved otherwise. When we filed the second application all the judges now fear to handle it, our lawyers are moving up and down in courts, in corridors. It had to even bring the principal judge to drive all the way from Masaka…to see how to deal with that file," said Lukwago.

Adding: "It has now become a hot potato, all the judges are fearing. The law allows them to grant bail, they have already actually granted bail to Ssegirinya and Ssewanyana and they took oath to upload the law, to uphold the Constitution [but] now Mr Museveni wants them to uphold his command. They are in a catch 22 situation, and you can also be picked tomorrow. I'm telling you and I’m assuring you, it never dawned or occurred to Ssegirinya or to Allan that one day they will be in that kind of mess - charged with all sorts of crimes."

However, Johnson Karemani the spokesperson of the judiciary challenged Lukwago to name the judges who have declined to hear the MPs’ application. Karemani said there is a shortage of judges now as many are currently prioritizing hearing election petitions.

“There are currently no judges to hear the application because they are currently hearing election petitions across the country," he said. "The principal judge definitely will allocate the file to someone to hear that application. So, it is wrong to say that judges are shying away from the case.”

Meanwhile, Dr Kizza Besigye has expressed shock to learn from media reports that the government lost interest in the case in which he was charged with treason following his arrest in 2016.

Besigye was in May 2016 arrested and charged with treason after he announced and swore in himself as the duly elected president of Uganda. However, the Daily Monitor newspaper reported yesterday that the then director of public prosecutions Mike Chibita in December 2019 wrote to the Nakawa court discontinuing the case without stating any reason. Besigye said that neither him nor his lawyers were ever told about the case withdrawal.

"I was also shocked to see in the papers that the case was dropped two years ago. I didn’t know, neither did any of our lawyers know. Our lawyers weren’t informed, me, the person who was accused and imprisoned, I didn’t know that they had freed me since 2019. I have been moving around knowing that I’m out on bail, I didn’t know that now am a free man…Even how the information surfaced is intriguing that when this new [activistim] campaign starts, then somehow we [get] to know that they discharged from this case. I think they must have their own reasons for dropping the case without informing us, without informing our lawyers." Besigye said

Responding to this, Karemani said there was no way they could reach Besigye who had vowed never to return to court.

“You remember that Dr Besigye said he was never going to go back to court on that particular issue," Karemani said. "How would we reach him to tell him about the withdrawal? But under normal circumstances, the accused person is normally told about the withdrawal of a case against him; but it can’t be court to begin looking for you when you are no longer interested in the matter.”

Revenge for the cowardly killed and slaughtered.
Did they have any mercy when they were killing innocent and helpless victims?

Wake up oh good Uganda and Ugandans !
Think and be sensible.!!

Suppose you were instead of those who were slaughtered and are no longer with us.
Revenge!!!!
Quote | Report to administrator
+1 #2 Lakwena 2021-10-12 11:39
In other words, after barking at the Judges last month, during Ben Kiwanuka's Memorial Lecture, Bloody Dictator, Gen Tibuhaburwa has spoken:

Therefore no Bail for trumped up Murder, Terrorism and Treason Charges. The duo: Hons Ssewanyana and Ssegirinya will rot in jail without trial.

Although he appoints them, are the Judges on the Payroll of Gen Tibuhaburwa?

Otherwise, there should be no justification for any Judge to chicken out of presiding over trumped up Capital offense/s cases.
Quote | Report to administrator
+2 #3 Willy not Silly 2021-10-12 13:45
Let us discuss the morality and integrity of a leader or ruler who arrests innocent members of parliament and shamelessly charges them with treason, murder and terrorism.
Quote | Report to administrator
+1 #4 Akot 2021-10-12 14:27
[Judges shying away from Ssewanyana, Ssegirinya bail application]

Becase judges know Uganda belongs to Museveni, they work for him & not for naive Ugandans keeping the demon in power at the cost of their complete destruction!

Can Ugandans imagine if they say NO to the tribalistic system & UNITE against Museveni?

No police/army/judges... remain at the side of evil dictators the moment people UNITY & come out & bringingf down the tribalistic system & UNITY will give Ugandans the power needed to say NO once & for all, to Museveni!

Why are Ugandans quiet taking blows, watching in fear, when the power to bring change lies in their hands, just through their UNITY, the same UNITY that blocked Tito Okello/Acholi to bring in Museveni?

Why is the divisive tribalistic system Museveni cleaverly put in place still ensuring his post, if Ugandans don't want him any more?
Quote | Report to administrator
+1 #5 Concerned Ugandan 2021-10-12 14:33
“You remember that Dr Besigye said he was never going to go back to court on that particular issue," Karemani said. "How would we reach him to tell him about the withdrawal? But under normal circumstances, the accused person is normally told about the withdrawal of a case against him; but it can’t be court to begin looking for you when you are no longer interested in the matter.”

Judging from the unfortunate statements above, it seems that the cardinal requirement for being a government spokesperson in any branch of government is to suspend the operation of your brain.

For Karemani who is supposed to be a judicial officer to suggest that notification of Besigye became impossible due to remarks he made makes one shudder about the quality of some judicial officers!

Besigye may have made the remarks but he had legal representation the entire time! What was wrong with court notifying Besigye's lawyers?! Is Karemani really so ignorant of such basic court practice?
Quote | Report to administrator
0 #6 kabayekka 2021-10-12 22:19
Akot my friend one fails to understand you. You are like Wainanchi!

Ugandan citizens should be more careful about people who keep attacking and criticizing fellow Africans. Temutubalamu magezi. There are several issues that need to bring humanity together for a common cause.

If Wainachi want many fellow citizens to join him and go and kill people for revenge, well that is his everlasting song. However, there are many more who cannot join him or her.

And if Akot wants fellow citizens to give up their cultural tribes so that they can unite to remove a mad dictator, of course there are many more who cannot do such a thing. It is really up to the parliament of Uganda to send this dictator home. Actually he was going home but the parliament of Uganda gave him the mandate and all that he wanted to stay put in the presidency of this country!
Quote | Report to administrator
0 #7 kabayekka 2021-10-13 09:44
It will help the parliament of Uganda to come out this time round and put up a law to stop this long serving president that is gradually turning the country into a political dynasty.

It should be remembered that this republican driven government of NRM stopped the dynasty of the UPC to take roots in this country.

It stopped such political maneuvering through a very brutal civil war and national constitutional amendments.
Quote | Report to administrator
0 #8 kabayekka 2021-10-13 10:27
So one should not try to change ones tribe and culture to remove tyranny in this world.

And it is counter productive to go on and revenge and brutally kill people who all along for 59 years of this country's history, have been fighting, arresting and killing people and destroying their property in the name of good African governance! Mutubalemu kumagezi!
Quote | Report to administrator
+1 #9 Wainanchi 2021-10-15 16:00
Dear readers.See and read how mother of terrorist MP Ssengrnya is pleading and crying to save life of her beloved son!

Where was his mother when he was killing innocent people and why families of slain people didnot appear in court and smashed this so call mother ??

Come on Uganda see this shame and ugly people Do not do bad things If you do them you will be punished.Thibk before you act, please!!Some of you thought you would not be discovered but there is nowhere to hide !!
Justice for slain people !