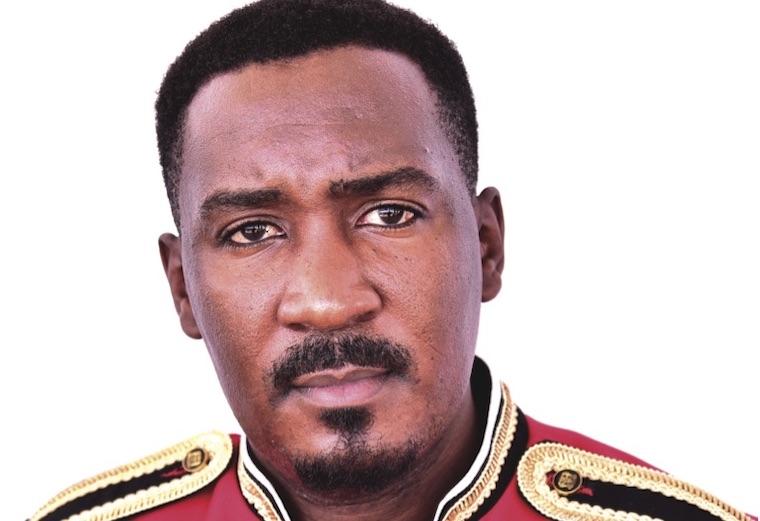 Makindye West MP Allan Ssewanyana was today dramatically rearrested at the gates of Kigo prison moments after he was released on bail.

Ssewanyana together with Kawempe North MP Muhammad Ssegirinya are facing murder and terrorism charges arising from the recent machete killings in Masaka sub-region that claimed over 30 lives.

Ssewanyana's temporary freedom was short-lived after he got rearrested mafia-style by security personnel driving in the infamous white drone. The commandos brutally arrested Ssewanyana as prison officers looked on in disbelief. The commandos drove him away to an undisclosed location.

Ssegirinya probably survived facing the same fate after Mityana Municipality MP Francis Zaake, who, committed to stand surety for him was not available to append his signature on the bail release form.

Ssegirinya and Ssewanyana were arrested on September 7 and taken to Masaka Magistrate's court. But since the court lacked the jurisdiction to try the offenses, they had to seek bail before the High court which was granted by lady justice Victoria Nakintu Katamba on September 20 on the presumption that they are still innocent unless proven to be guilty.

As part of the conditions, however, the judge directed the legislators to pay a Shs 20 million cash bail and ordered their sureties to execute a bond form of Shs 100 million not cash.

They were also instructed to surrender their passports to the international crimes division of the High court where they would report twice every month and barred from participating in any rhetoric that may cause public excitement.

After fulfilling the conditions of paying the cash to the bank and surrendering their passports, the parties on Thursday appeared before the registrar Beatrice Atingu in Kampala to append signatures on the forms.

Subsequently, Ssewanyana and Ssegirinya appeared via a Zoom link connecting from court to Kigo prison where they are were directed to sign in the presence of the registrar before the sureties can also sign physically in court.

Ssewanyana was the first to sign the three copies of the forms after being directed to read through the terms and conditions. He was then followed by Ssegirinya who seemed too eager to leave jail but his co-accused Ssewanyana advised him to first read through the bail conditions before signing even though he had started signing without reading.

The registrar then called Ssewanyana’s three sureties - all MPs; Ibrahim Ssemujju Nganda, Veronica Nanyondo and Francis Katabazi Katongole to appear at the bar as she read one name after the other to come and append their signatures as well.

Moments later, court took a break of 20 minutes since Ssegirinya's sureties were not all in court and resumed to let the two sureties Moses Walugembe Mawanda and Christine Nandagire who were present to also append their signatures.

When the process of physical signing was complete, the registrar said the accused persons were further remanded until the release order reaches Kigo prison.

Ssegirinya’s lawyers led by Erias Lukwago revealed that they are going to file an application to substitute Zaake because waiting for his return may take their client a little longer in prison.

Lukwago said that they have two other MPs including Mityana Woman MP Joyce Bagala with whom they want court to allow them to substitute Zaake and be considered as his surety.

This now means that the application seeking to substitute Zaake which has not yet been filed, until it is allocated to a judge and determined on its merits, Ssegirinya will still have to be on remand or to wait up to when Zaake appears.

The prosecution alleges that the Ssegirinya and Ssewanyana physically participated and connived with other people to execute the murders in greater Masaka around the month of July and August 2021 which saw dozens killed with machetes and scores injured.

According to the prosecution, the killings were made with intent to intimidate the public for political, religious, social, or economic gains. But the MPs still maintain their innocence.

12
+1 #11 Jonathan 2021-09-25 20:12
During Obote 's era and Amin's era kidnapping of the ordinary citizens and administrative detention of the ordinary citizens were rampant, It seems Obote' s ghost and Amin's ghost are back on earth to haunt museveni and his rap dogs.
Report to administrator
+2 #12 Apollo 2021-09-25 23:33
The difference between the kidnap and disappearance of the late Chief Justice Benedicto Kiwanuka and Hon. Ssewanyana is the power of technology.

The significance of difference in their methods lies in fear, not of illegally arresting or carrying out extra-judicial murder of their enemies, but in being caught by the camera while at it.
Report to administrator
0 #13 Lakwena 2021-09-27 08:48
Quoting Wainanchi:

All terrorists should be hanged to the tallest trees no matter if they are MPs or ordinary citizens.

Thos thug is caught red handed , there is overwhelming evidence and he is to be imprisoned for many years or hanged Kabisa.

But Wainainchi, where is the "overwhelming evidence"?

But as for you and Bloody Gen Tibuhaburwa, the 36 years of bloody terror, murder, abduction, corruption , "erection rigging", widespread ignorance, poverty,diseases etc. are self-evidence of NRM era terrorism banditry and landgrabbing.

You will therefore be hanged from a 20-storey Construction Crane, on top of Kololo or Naguru/Bukoto Hiill, so that all the people of Kampala will be able to see you being hanged from wherever they are.
Report to administrator
-1 #14 WADADA rogers 2021-09-27 11:46
Sewanyana and group are part of the long term plan to let themselves be used to get rid of the opposition in Uganda, they are being paid to be part of the comedy taking place at the moment.
Report to administrator
12