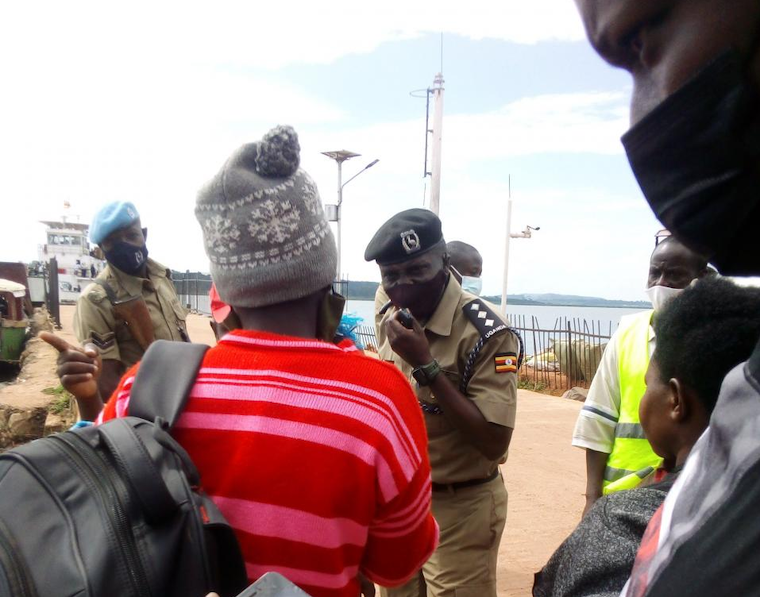 Police blocks some of the passengers from boarding the ferry

The officers were enforcing the COVID-19 guidelines that require public transport operators to limit the number of passengers to curb infection rates. This was the first time the officers have enforced the guidelines ever since the ferry resumed operations last October.

Nation Oil Distributors Limited (NODL), a private company, operates the ferry on behalf of the ministry of works and transport. MV Kalangala, with the capacity to carry 100 passengers, 165 tons of cargo and 4 buses, is one of the major marine vessels plying from the mainland in Entebbe to Kalangala.

It operates one return trip between Entebbe and Kalangala, departing Entebbe daily at 2 pm and returning the next day at 11 am. The vessel charges the least on that route, whereby passengers pay Shs 10,000 and She 14,000 to sit in the ordinary and VIP sections respectively per trip.

As a result, many passengers flock to Port Alice daily to board MV Kalangala because it is the cheapest, carries vehicles, and has the capacity to carry the largest amount of cargo.

Amanya, who is the head of marine police in Entebbe, says the police officers were deployed to enforce COVID-19 guidelines for public transport operators. He says the ferry is supposed to carry half capacity, that is 50 passengers during the pandemic.

"But because of the high demand on the Entebbe-Kalangala route, we have allowed an additional 20 people so that they carry 70 passengers," says Amanya.

The operation to enforce the COVID-19 guidelines commenced Wednesday. As a result of the operation and stiff resistance from the passengers who were blocked, the ferry departed from Nakiwogo after 3pm.

NODL workers refunded the 60 passengers who had paid for the trip while another 10 had crowded the boarding gate hoping to pay onboard.

Some of the 70 passengers tried to oppose the move. One female passenger who had boarded the ferry tried to exchange her seat with her daughter and son who had been blocked from boarding.

Police officers however asked her to decide on whether to forfeit her seat for another passenger at the boarding gate. The woman told her daughter to board the ferry. Her pleas to also board with her son however fell on deaf ears.

A foreign national also pleaded with police officers saying he had already booked for a hotel room in Kalangala and did not have anywhere to stay in Entebbe. He was also not allowed to board.

The same thing happened to a man who was returning for work and three women who said they were going to attend a conference in Kalangala. The conference runs from Thursday to Saturday.

Some of the passengers expressed their disappointment at the boarding gate. 30 of the affected passengers, including foreign nationals, opted for a boat, which charged each of them Shs 30,000, almost double the price of the ferry.

Allan Ssebuliba, a resident of Kalangala, failed to board the boat because of financial constraints. He says the police officers and NODL should have informed passengers beforehand about the operation for better planning.