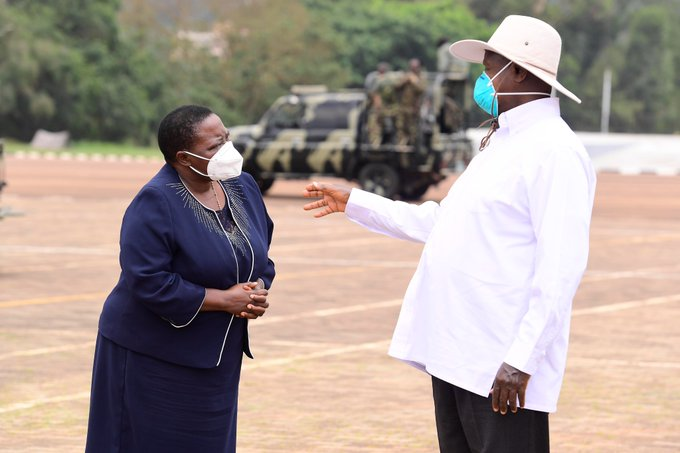 President Yoweri Museveni has lifted the ban on places of worship that has been in place since June this year. In his Wednesday evening address, the president also directed that schools be reopened starting with post-secondary institutions on November 1 and other learning centres in January 2022.

“Places of worship, can now open under the following conditions; limit the number of worshipers to not more than 200 provided there is two meters of social distance, strict adherence to SOPs at all times, having temperature monitors and consistent wearing of masks by all congregants and no congregation for worship after curfew hours,” Museveni said.

For schools, Museveni said he was aware that Covid-19 is not very lethal among children but the majority of the schools in Uganda are day schools which poses a risk to adults with whom the children live. He said, therefore, it’s very crucial that before schools reopen, the country must first vaccinate 4.8 million people in the priority category including teachers, support staff, health workers, security and all learners above the age of 18.

“If all schools were boarding and we vaccinate teachers and other workers, we could open knowing that students would survive. But they are going to wipe out all their parents and grandparents. We will end up with children headed homestead like it was when AIDS killed all the parents. But AIDS would kill only the sexually active; so you would find a home with children and old people. This time there will only be children. Why would anyone suggest we take this risk, are you serious?” Museveni wondered.

He said that the government has a target of vaccinating at least 22 million people although the focus now is on the 4.8 million priority population.

“Even if you miss a year in education, we have mature intake even in normal times, how will the dead person study either now or in the future? I can’t understand the logic; dead people don’t do business, don’t study, but if you are alive you can catch up,” Museveni said on those calling for the full reopening of the economy.

Museveni called upon teachers not to hide children that get sick when schools eventually reopen. According to Museveni, if this happens, he warned, such school administrators, risk spending time in jail.

“In the past, some teachers were hiding these diseases because they don’t want the school to be closed, if we discover this, you will be in very serious trouble. We are even amending the law to deal with anybody who hides sick children in schools. Report, where we are going with vaccination, the closing of schools when we have already opened will no longer be necessary,” Museveni said.

He called upon local government officials district administrators to mobilize people to go and get vaccinated. He warned that the area resident district commissioner (RDC), chief administrative officer (CAO) and district health officer (DHO) will be sacked if any dozes of the Covid-19 vaccines are sent to his or her jurisdiction and they expire before they are used.

“I now direct with immediate effect, that all RDCs CAOs, DHOs, must carry out intensive mobilization for all illegible groups to go for vaccination and must ensure that no vaccines expire. If any vaccines expire in your area, I will dismiss you, we want to open up. Our strategy now is vaccination, let the vaccines be used,” he said.

The president also lifted a ban on weekly markets, save for those in hotspot districts, such as Kampala, Soroti, Kalungu, Kabale, Kumi, Tororo Nwoya, Gulu and Yumbe. Casinos, gaming and betting shops, gyms, can now also operate but close by 6 pm.

The number of people allowed to attend weddings, funerals and other social gatherings has also been increased from 20 to 200 provided they follow SOPs. But for concerts, discos cinema halls, performing artists, beaches, and bars, the ban on them will be considered for lifting after vaccination of 4.8 million people.

Curfew hours have also been maintained between 7 pm and 5:30 am. Meanwhile, Museveni has also directed that police releases all boda bodas which have been impounded for violating curfew hours.

“I think as people of religion sometimes it’s good to forgive, I think these young people have already been punished as they have not been earning. I, therefore, direct that you release the piki piki and if you are a second offender we shall go for you. But let us give amnesty to these boda bodas,” Museveni said.

0 #1 kabayekka 2021-09-23 14:44
But one has just read that in Uganda, Dr Alfred Driwale, the country’s head of immunization program says that his staff cannot release Moderna type of vaccine before districts have exhausted other types of vaccines the country continues to beg and receive in large quantities.

We have been telling this government to open up the country so that the people can access immunization as much as possible all over the country 24 hours and 7 days.

And there are many organizations that can assist the hospital staff to see to it that their communities get vaccinated. The issue of vaccines expiring should not even be considered. Because soon the year is going to end and a new chapter in mass immunization is about to start!
Report to administrator
0 #2 kabayekka 2021-09-23 14:55
Abroad in sensible countries, bars and restaurants have opened up because most of the people have been vaccinated twice.

And yet most of these places are still following SOPs and noting their customers' identifications in case there is a break out of COVID19 in their backyards!

That is more sensible indeed. It would help out at ports if vaccination is placed there for travelers who need it other than charging them and sending them back from where they have come from. It is stupid indeed for this world to destroy the expired vaccine when million of people have not yet been vaccinated.
Report to administrator