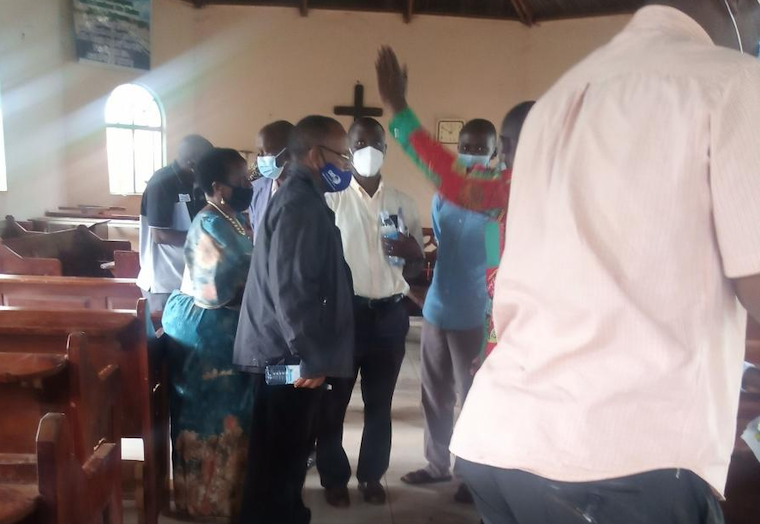 An Anglican priest has been suspended for alleged involvement in the illegal sale of St Andrews Church land in Kiteezi in Gayaza, Wakiso district. Rev Semei Sebina Sekiziyivu, the parish priest of St Andrews Church was suspended from conducting priestly duties pending investigations into accusations of illegal sale of church land. He was replaced by retired Rev Eriya Kawooya.

“It has come to our knowledge that how you have handled church land issues did not follow the procedures of the church. You are hereby directed to step aside in matters of the parish ad land until you are recalled,” reads part of the letter dated September 3.

Rev Sekiziyivu's suspension followed complaints by Christians questioning how he handled and allowed the takeover of church land without due regard to the processes and procedures of the church.

Sekiziyivu was suspended together with the archdeacon of Gayaza, Rev Herbert Nyanzi Kabanda who was his immediate supervisor.

The head of laity St. Andrews Church Julius Buwembo says that Sekiziyivu fronted various people to grab the church land in the guise of development.

The land which measures 2 acres is located at Bamba village. It is alleged that Sekiziyivu directed the destruction of an avocado and coffee plantation to establish a new church in an area less than a mile away from St Andrews Church.

Buwembo also alleged that Sekiziyivu allowed Mary Namuddu to access and develop part of the land without the consent of the church leadership.

While claiming to have acquired the lease through the Namrembe Diocese, Namuddu has been working closely with Sekiziyivu who called in the police at the time when other church members protested.

“While using forged documents, Rev. Sekiziyivu, granted a lease to Namuddu and he has been using force on all land matters. At Kayanga village, we have 50 acres but with squatters and what he did, on the remaining space, he brought people on it,” said Buwembo.

According to Buwembo, the church at Kiteezi is on the verge of losing its compound due to the actions of Sekiziyivu. Rev Segawa commended the leadership of the diocese for the courage and sacrifice to save the church land.

Bishop Luwalira said that the church will investigate the complaints and come up with a report and recommendations.

0 #1 Ugthinker 2021-09-20 18:38
Something is wrong in our country! Why is a land transaction occasioned by by someone without powers to do so recognised?

Shouldn’t it be a straight forward act of fraud, whereby the rightful owners wouldn’t even have anything to do with the sham deal anyway?

In this case I haven’t even read the word prosecution anywhere! What’s wrong with our systems?
Report to administrator
0 #2 Eric L 2021-09-20 20:17
I thank Bishop Luwalira for standing strong in the face of all these challenges.

The church has turned against itself, the leaders too have become vampires ready to eat out the laity, very hard times indeed.
Report to administrator
0 #3 kabayekka 2021-09-20 21:49
Indeed the priest Sekiziyivu and his misgivings is only a drop in the ocean of buying, selling and giving away vast lands in the Ancient State Kingdom of Buganda.

It is very normal to find that on such a piece of land one can easily obtain a land title document from the expert printers and after convincing many of the central government relative officials over such a land deal, the new owner takes over the Ganda land as mailo land into his or her possession.

That is why the remains of the former pathologists at Mulago Hospital, the late Dr. L. D. Kafero were removed from St Andrews Church in the early years of 1990 after being convinced that Church land in Buganda is not at all safe to keep the dead for some years.

The public is well aware of the corruption that is running without restraint in all the religious fraternity of this country. Indeed it seems no land these days is safe from land grabbers plus the graveyards.
Report to administrator
0 #4 kabayekka 2021-09-20 21:58
Lucky enough that Jesus Christ, who the late Doctor Kafero loved so much, spent only 3 days in His graveyard.

One sympathizes with Buwembo when he laments that the church of Kiteezi is on the verge of losing its compound due to the actions of irresponsible actions of the current community leadership.

One has only got to look at the international city of Kampala and wonder where all the old nice tropical leisure parks went to?
Report to administrator
0 #5 Lakwena 2021-09-21 11:31
In other words, these priests are becoming so shameless and Satanic; to the extent of beginning to steal money and land, directly from God himself.

God, where are you? Otherwise, there are bloody criminals in your churches masquerading as Shepherds, yet they are bloody wolves in sheep's skin.
Report to administrator
0 #6 Ssemaganda Grace 2021-09-22 16:40
Off all people, it shouldn't have been from a man of God to conspire and sell church land!

Remember not every one who says Lord, Lord will enter into my Kingdom. We need all us to reform.
Report to administrator