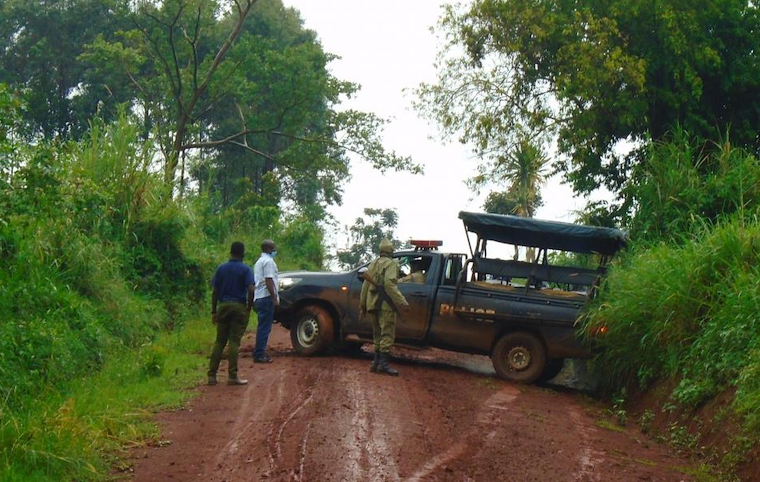 A police truck struggles to stay on course on the road

Prime Minister Robinah Nabbanja has terminated a Shs 1.8bn contract for the construction of a 42-kilometre road in Kyegegwa district over shoddy works.

The road which connects from Kakabara sub-county in Kyegegwa district to Nabingola in Mubende was constructed under the Development Response to Displacement Impact Project (DRDIP). The program under the Office of the Prime Minister (OPM) is intended to support refugee-hosting communities.

They also argued that the road is impassable, narrow, and without culverts. John Kisoke, the LC V chairperson requested that Uganda National Roads Authority (UNRA) takes over the road. He also said that attempts to have the contractor rectify the defects have been futile.

Kisoke told Nabbanja that the contractor has so far been paid Shs 700 million of the Shs 1.8 billion. The complaints from the leaders forced the premier to order for the immediate termination of the contract.

"For me, using the powers I have as a prime minister, I have terminated the contract. Let us pay other people who want to do work and you must account for the money. The work done must commiserate with the money that has been paid and if it is not, we shall arrest you. I want the engineer DRDIP, your contract is also terminated. If you want to work with the Prime Minister's office please do the best. [President] Museveni is tired and fed up of lazy and corrupt people. For how long will you shame this government, the president is struggling to get money. By the way, some of the money is a loan that Ugandans have to pay back and you come here to buy cars, to be arrogant. Using the powers I have as a prime minister, I have canceled your contract." said Nabbanja.

Nabbanja also faulted the leaders for not supervising government projects which have given room to shoddy work. Nabbanja said she will send a team of engineers from her office to take measurements of the road and also test the quality of murram used on the road. She added that if they don’t meet the expected standards, the contractor and supervisor of the project will be apprehended.

"Stop always disparaging the president, shaming him. Shs 1.8bn for this?! How do you pay Shs 700m for such work, aren't you ashamed? This is not even worth Shs 30m," added the prime minister.

Hillary Onek, the minister for Relief, Disaster Preparedness and Refugees said that his office has received reports of procurement irregularities committed by district officials implementing the DRDIP projects. He said that the officials demand 10 per cent of the money before they award the contracts.

"We also have weaknesses in the district, I'm hearing that before you give out contracts, you demand 10 per cent. I don't know if it's your district or another one. You demand 10 per cent before you give out a contract, this is what I'm informed in Kampala and some people do bad engineering for Abim because of that behaviour. So the engineer of DRDIP why are you behaving unprofessionally? Engineer by Monday you're in Kampala, we're going to refine your qualifications," said Onek.

The managing director of PEKASA, George Sande declined to comment on the delays. On the issue of shoddy works, he said according to the bills of quantities the carriageway of the road is supposed to be 4.5 meters, while the width is 7 meters, which the district officials are against.

+1 #1 Lakwena 2021-09-20 13:22
But should the contractors go to court over apparent reasons she is not aware of; full of herself in her new-found position and power (kajanjja), PM Nabanja's unilateral termination of the Contract of the Kyegegwa Road Construction on site (roadside) may cost Ugandans an arm and a leg.
Report to administrator
+1 #2 Concerned Ugandan 2021-09-21 09:54
Quoting Lakwena:

But should the contractors go to court over apparent reasons she is not aware of; full of herself in her new-found position and power (kajanjja), PM Nabanja's unilateral termination of the Contract of the Kyegegwa Road Construction on site (roadside) may cost Ugandans an arm and a leg.

This is the price of Public Gallery politics! The woman clearly has no basic understanding of the powers of her office. There are well established processes for termination of public works contracts and the Prime Minister's office does not feature anywhere in those processes!

"Using the powers I have as a prime minister, I have canceled your contract." These are the very same words that the contractor will rely on for wrongful termination of contract!
Report to administrator