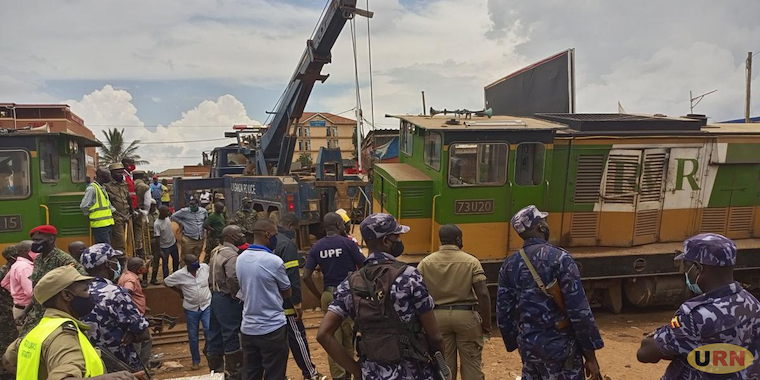 Two UPDF soldiers have been rushed to hospital in critical condition after a vehicle they were traveling in rammed into a moving train. The accident occurred at around 7 am on Thursday at the Kireka railway crossing.

The soldiers were travelling in a Land Cruiser registration number H4DF 2180. According to eyewitnesses, the soldiers were fleeing from angry boda-boda riders who were pursuing them after they knocked dead one person in Bweyogerere. Isaac Stephen Opule, one of the residents in Kireka says after knocking a boda boda rider and the passenger, the soldiers did not stop, forcing the angry riders to follow the soldiers. According to Opule, the soldiers were lucky to survive because they rammed into the train when it had started reducing speed to pick some passengers.Bakulu Mpagi, another eyewitness says the driver of the Land Cruiser could have ignored the warning signs that there was a train up ahead. Uganda Railways Corporation staff, the police and army teams cut the wreckage of the car that was stuck under the train. Kampala Metropolitan deputy police spokesperson Luke Owoyesigyire said the police fire and rescue service team together with residents were able to rescue the two soldiers but were still in very critical condition.

+3 #1 WADADA rogers 2021-09-16 21:50
I know that my next statement may not be the best to mention at this time but i think this accident is a good lesson to the men in Uniform who owing to the nature of their office think they have a right of way, always driving on the wrong side of the road and overtaking from any point, i think they had forgotten that a train cant give way, i wish the man himself was in that car
Report to administrator
+1 #2 Pearson 2021-09-18 11:27
Condolences to the families of the dead/injured but you see these trains are funny machines.

They don't give way. They are given way lest you are crashed into them and they don't know impunity. Karma caught up with them after knocking the rider.
Report to administrator
0 #3 Lakwena 2021-09-20 08:34
In other words,UPDF has to pay the Uganda Railways damages.

But why is the Locomotive still bearing Rift Valley Railway name, yet it exited sometime back?
Report to administrator