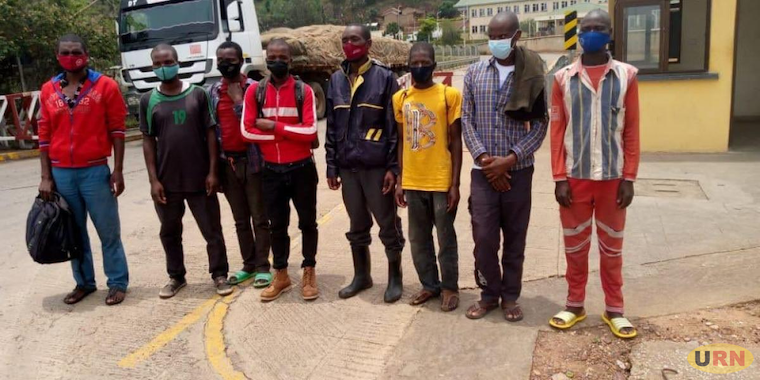 Some of the deportees

According to a security source, the first batch of eight personnel was deported at 11 am while others were deported at 4 pm, and were both received by Rwandan authorities at the Rwandan side of Kagitumba.

The source however declined to reveal details about when the Rwandan nationals were arrested, where they were arrested from, and the reasons behind their deportation. However, he added that the deportees were all men. The Rwandan government through the Rwanda Broadcasting Agency (RBA) confirmed receiving 15 of its nationals who had been deported from Uganda. It however also did not give details.

Last week, another six nationals were deported from Uganda through the Chanika border in Kisoro district, after pleading guilty to illegal entry before Kisoro grade one magistrate Raphael Vuenni. They had been arrested a day before at Kanaba checkpoint along Kisoro-Kabale road while heading to Kampala, yet none of them had travel documents.

However, after reaching Rwanda, they argued through Rwanda’s online news agency, New Times Rwanda that they had spent 14-days in detention at Kisoro police station. In detention, they said, they were beaten and dispossessed of their valuables, including money.

Rwanda argues that ever since Uganda "decided to back, sponsor and facilitate groups bent on destabilizing Rwanda, most notably Kayumba Nyamwasa's Rwanda National Congress (RNC), and the Democratic Forces for the Liberation of Rwanda-FDLR genocidal forces, life has become very difficult for Rwandan citizens travelling to Uganda or those already a resident there".

The government of Rwanda has previously warned nationals against travelling to Uganda, indicating that their safety cannot be guaranteed in the neighbouring country.

Rwanda has closed its borders with Uganda since February 2019 and since then, seven Ugandans have been shot dead in Rwanda on accusations of smuggling. Tensions between the two countries continue to worsen with President Yoweri Kaguta and President Paul Kagame both throwing public barbs at each other.

Recently, Kagame during an interview with RBA said that Uganda always wants to blame Rwanda for everything and very soon it might blame it for the COVID-19 pandemic. Likewise, Museveni in a recent interview with France 24 said he pays no attention to countries that try to spy on him and his government because all his secrets are kept in his bed. He also said those asking him about the border closure should ask Kagame because he's the one who closed it.

Wachireba?
Report to administrator
+1 #2 kabayekka 2021-09-16 14:06
Unfortunately these are small time deportees who are trying to look for temporary work in neighboring African countries. The major issues that need talking about and solving are avoided.

Most of the public in Uganda want Rwanda to compensate it for the equipment and personnel that was spent in the Rwanda civil war of 7 April – 15 July 1994.

Actually it is agreed that Uganda started that bad habit of transferring its political problems to neighboring African countries.

One hopes Uganda has paid Tanzania for such a misadventure and the Democratic Republic of the Congo has not yet been paid by Rwanda and Uganda!
Report to administrator
0 #3 kabayekka 2021-09-18 15:10
Surely one cannot understand why some of our African brothers put their fellow African brothers into very brutal civil wars and underline them as very good civil wars(revolutions).

One wants to ask of what benefit to the African people did Rwanda and Uganda take their troops into the Democratic Republic of the Congo to remove dictator Mobutu, who had ruled that country with an iron fist, for many years?

These are the same countries which presently have these liberation leaders who are doing the same governance as Mobutu or Amin did!
Report to administrator