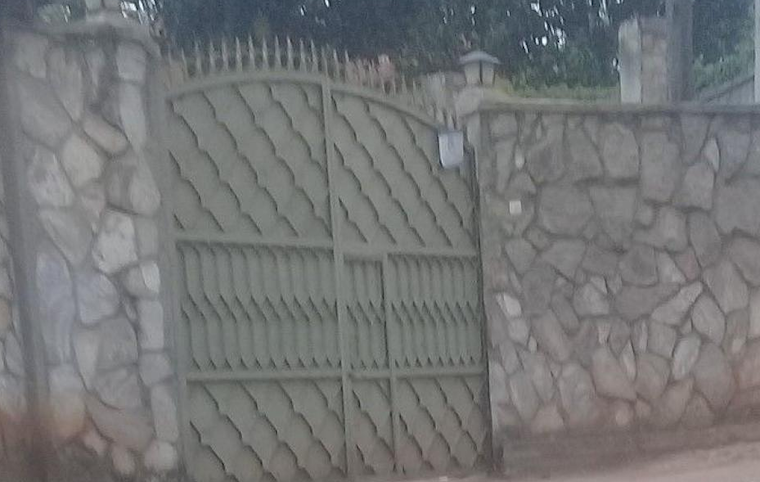 The husband and prime suspect in the case of missing businesswoman Immaculate Mary Blessing Onebe, Francis Onebe has denied ever employing a housemaid after police discovered a second body inside his septic tank at his home in Munyonyo.

Onebe’s home is on Kaggwa Rise which falls under Munyonyo parish, not in Muyenga as earlier reported. The 72-year-old has been in the news for the last eight months claiming his wife, Immaculate Onebe, was kidnapped by unknown people moving in a Toyota Hiace commonly known as drone.

Soon after Immaculate went missing, Oriokot also disappeared. But he was arrested by the new guard from the same company who found him hiding in a pit latrine. Detectives interrogated Oriokot with the view of knowing whether he knew where Onebe’s wife was and why he too varnished as soon the woman went missing.

However, Oriokot shocked investigators when he insisted that Francis knew whatever happened to his wife. Detectives summoned Francis to CID headquarters at Kibuli but quickly noticed inconsistencies in his statement.

A decision was made to visit his home, open the pit latrine and septic tank. Indeed, their suspicion became a reality as a body of a woman was sighted in the septic tank. The corpse was retrieved alongside a heavy bag that had been placed on its chest.

Investigators decided to open the heavy bag but their eyes landed on a human skull and other body parts such as ribs, arms and legs. Onebe who has been kept at Special Investigations Unit (SIU) in Kireka and sometimes Jinja Road police station was tasked to explain who could be the possible second victim.

“We asked him to explain whether he had a maid and he said no," a detective said. "He denies ever employing a maid. He does not believe that the woman we retrieved from a septic tank is his wife. But our suspicion is that the maid could have been killed after she witnessed the killing of her boss Immaculate.”

CID spokesperson, Charles Twiine, told URN, that they now have a task to establish which of the two bodies was Immaculate. He adds that their hope is in the DNA samples drawn from a daughter to Immaculate.

“We have a big task to identify who of these victims was Immaculate. But if the DNA results show none of these bodies is of Immaculate, we shall have to trace for people who could have lost their relatives to help us identify these bodies,” Twiine said.

"The scenes of crime officers, as well as doctors, wanted to find out what was in the bag for purposes of getting maybe another possible evidence. Unfortunately, when they opened, they were shocked to find that what was in the bag was a skull of a human being - then some bones seemingly of hands, the waist, the ribs as well as the legs. Now, there it became a puzzle, because whereas there was suspicion that the first body belonged to Immaculate, now we turned up having two bodies. But the good news is that we have taken some samples from one of the daughters of Immaculate. So we're going to use use the same sample to establish whether the DNA of the girl matches with the DNA of the two bodies which we have," added Twiine.

Although Onebe denied ever employing a permanent maid, Godfrey Akena, the defense secretary of Lower Mawanga village, said the couple had a maid who they often sent to buy foodstuffs from his shop.

"There was a maid who has been there before who they used to send before to come and buy things for the mother. But after some time, that maid was not there, and we used to see only the askari coming to buy. We don't know whether the maid has left the job or what. We can't tell that one, because we did not get any information. We're not even informed if the maid disappeared or anything, no. Only the issues of the madam, the issue of the wife," Akena said.

Akena explains that the maid was last seen a few weeks before Immaculate was declared missing. At the time, Oriokot was the one buying foodstuff from Akena’s shop.

From January 6 up to last week, Onebe visited several security detention facilities among others Kabalagala, CMI and SIU. He insisted that his wife was kidnapped by a drone adjacent to their home.

+4 #1 WADADA rogers 2021-09-15 10:10
I cannot entirely rule out the involvement of Onebe in the death of immaculate but it is even hard to trust whatever has been said by the police, this Government can accuse any one of anything at anytime if they have something personal against you, if they want to take you down or if they want to steal from you.

If you are doubting me, ask Sewanyana and Ssegirinya, do you think any right thinking Ugandan will believe they have a hand in the Masaka killings? .
Quote | Report to administrator
0 #2 SK Mugisha 2021-09-15 10:40
Just wondering what may happen if the DNA of the daughter does not match any of the bodies.

It is possible that actually the second body, having decomposed to that level is the one for Mrs. It is 9 months since her disappearance.

May be the fresh body is the one for the maid
Well let us see how it unfolds
Quote | Report to administrator
+1 #3 Daniel Musoke 2021-09-15 22:11
Am losing track of this story! Somebody help! When they retrieved the first body, how come they didn't see the 2nd?

And what prompted them to still go back to the septic tank? If Onebe killed his wife, what's the point of keeping the body literally 'under the pillow' - so close to the scene?
Quote | Report to administrator
0 #4 Lakwena 2021-09-16 15:29
This is must be an eerie serial murder scene of crime!

In other words, with all the moneys and pomp they may have; many people literally live in Hell.

... If Onebe killed his wife, what's the point of keeping the body literally 'under the pillow' - so close to the scene?

Daniel Musoke, murder victims are the silent witnesses. There is a way they show up, like in this case.

There is something spooky and mysterious, which finally catches up with especially serial killers like Onebe. However diversionary they may become, like e.g., being the first to report to the police, they are literally stupefied by what they have done, which they shouldn't have done.

In other words, all crimes cause mental health breakdown (guilt). Hence e.g., the golden rule "Thou shall not steal and kill!

No rational person should kill another person. But in this country we often hear how the King of Bloodshed, Gen M7 Kaguta & Co. boast of how they massacred and threatens to crush fellow countrymen women and children
Quote | Report to administrator
Refresh comments list
RSS feed for comments to this post
Add comment