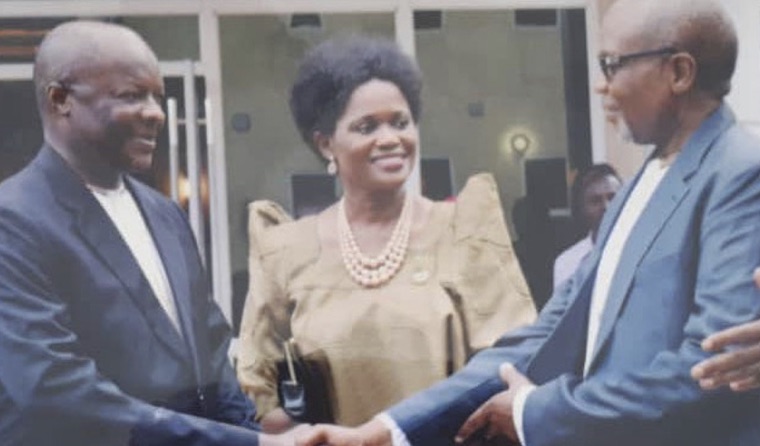 In a society with many tycoons with shady paths, Dr Hajj BULAIMU MUWANGA KIBIRIGE [BMK] stood out for being forthright and honest. A trendsetter in business, he will be remembered for creating opportunities for others, writes Denis Jjuuko.

If there is one thing Dr Hajj Bulaimu Muwanga Kibirige, the legendary entrepreneur popularly known as BMK, failed to achieve in his life before his death, it was the authorship of his second book.

He had intimated several times that he wanted to write a book about aggressive cancer, a disease he was diagnosed with in Bangkok in 2015 while on a business trip.

On the day of his diagnosis, BMK gathered both his wives, a daughter and brother he was traveling with to hear the bad news themselves. The Thai doctor looking all grim informed him that he had two to three years to live.

BMK was heartbroken but he gathered himself and started a journey that he knew so well — fighting adversity. Whatever BMK was told, he did. Whatever doctors he needed to see, he went and saw them. But there was something else that was always on his mind.

He repeatedly told me that he wanted his empire to remain standing so his great grandchildren could find it. It is a message he repeatedly told and, in his memoirs, released only in March this year, he asked his siblings and offspring to do whatever they can to ensure that the BMK Group remains standing long after he is gone.

Dr BMK was a rare breed. As he fought cancer wondering how long he had to live, he never put his eyes off the prize.

Although he had stopped the day to day running of the business, leaving it in the hands of his young brother Haruna Kalule Kibirige among other relatives, he still wanted to see the business grow.

Many times, he received updates from his workers of what was happening in Japan, Zambia or here at home in Moroto. Moroto and Lusaka, Zambia were important to him because he was building Hotel Africana branches, which when they were launched made his hotel a real chain.

He had started working on plans for hotels in Arua and in the Murchison Falls National Park. For somebody suffering from an aggressive cancer, you would think he would simply shut out and only concentrate on fighting the disease or enjoy the few years he had.

That wouldn’t be BMK if he did that. BMK died in his prime. He was only days away from celebrating his 68th birthday having been born on October 2, 1953. A child of a coffee trader, BMK spent his first years with his paternal aunt who he fondly called Aunt Kevina, a Catholic for whom he would build a Catholic church in Namiryango in Gomba.

The aunt ensured that he got a Mwalimu (Muslim teacher) to instruct the young BMK in his faith. By his parents sending him to live far away from them in Matanga near Masaka with a relative who believed in a different faith, they were unknowingly training him for the world he would later choose.

He learnt as a young man to tolerate and live with others that were not like him, something that enabled him succeed as a businessman in Japan, UAE, Thailand, Hong Kong, China, Kenya, Rwanda, Zambia, and Tanzania among other countries.

He never cared what religion or tribe you belonged. When Archbishop Cyprian Kizito Lwanga died, I called him and he was inconsolable. He said they were friends and Uganda, not just Catholics, he told me, had lost a great man. He later shared an audio on a WhatsApp group that we were both members, in tears.

Dr BMK loved people. He loved his Kabaka and kingdom. He wanted humanity to succeed. When he started constructing his hotel in Moroto in Karamoja, he adopted children there and started paying their tuition fees like he had done with many others.

He was a campaigner of sickle cells disease yet he had no relative suffering from it. He approached Katikkiro Charles Peter Mayiga a few years ago requesting him to ask the Kabaka that the popular Kabaka Birthday Run focuses on sickle cell for a few years, which the Kabaka granted.

He loved his Ngeye clan, naming even a major restaurant in Hotel Africana after it. The news of Dr BMK’s death was shocking. I had just arrived in office when I received the message from Katikkiro Mayiga.

He described him as a man who did everything to develop not only his country but the entire continent. Somebody who provided jobs for all the people wherever he went. He was a generous man. I have enjoyed his generosity only that he never allowed me to tell anyone whenever he did something for me.

On several occasions, he would call me and say I think you need this, I will ask somebody at the hotel to send you something but it is only the three of us that know about it. Keep it that way. He would call even when he was sick to ask how your family is.

I am lucky though that I learnt a lot from Dr BMK, treating me as his own son many times. If I went to one of his homes and he was in the bedroom, I would meet him there!

He was keen to introduce me to people he thought I should know. I am glad that he left his autobiography titled My Story of Building a Fortune in Africa with us so that we continue learning from him. May Allah grant him Jannah.