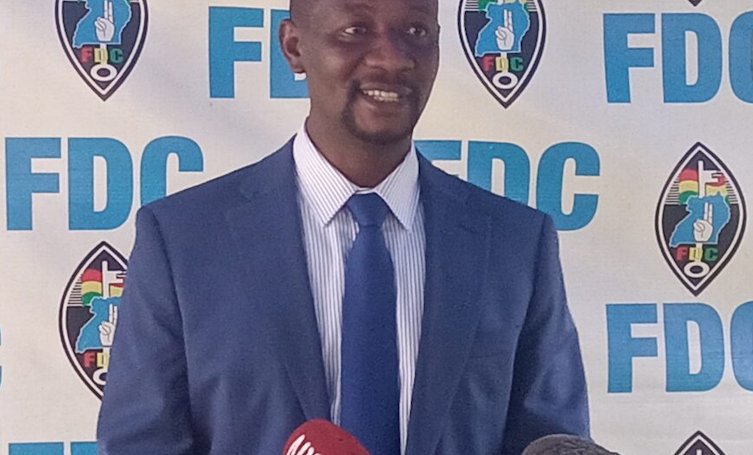 Opposition Forum for Democratic Change (FDC) party has welcomed President Museveni’s decision to partially lift the 42-day lockdown imposed on the country on June 18 but called for the reopening places of worship and schools before the inevitable third wave.

While lifting the lockdown on Friday last week, Museveni said places of worship will remain closed for another 60 days when the order would be reviewed. For schools, Museveni said, they will remain under lock and key at least until students aged between 12 and 18 have been vaccinated.

But Ssemujju Ibrahim Nganda, the FDC spokesperson says that the fact that markets remained fully functional and there were no known spikes in infections or deaths, is testimony that lockdowns alone can’t explain the reduction in Covid-19 cases. He was speaking to journalists at the party’s headquarters in Kampala.

"It appears, Covid is turning out to be seasonal. When it is time for the first or second wave, it will hit you whether you are in a total, semi or no lockdown. It is also possible that Covid subsides on its own accord. This is not to belittle our interventions to stop or minimize the spread." he said.

Ssemujju added that reopening up places like markets, taxis, and bus parks which normally accommodate more people than places of worship, is a contradiction that must be cured. He said religious leaders should be advised on following standard operating procedures like admitting only half of the usual congregants.

"Places of worship must remain open as long as they observe the Covid-19 measures. We can even limit the number of those who go to attend prayers and services, make them half or even a quarter of their usual congregations. Places of worship are not just for prayers, they are traditionally relief coordination centres. Since the population trusts religious leaders more than the government and elected leaders, we should be asking religious leaders to play a more prominent role in relief mobilisation for a section of society that cannot feed itself incase of Covid-19 shocks," Ssemujju said.

For education institutions, FDC said it’s important to have learners back to school now following protocols that would make students safe.

“Instead of a three months’ term, we can reduce it to a maximum of one month. Studies that require physical interaction with the teacher should be carried out during this one month and learners sent back home for revisions with enough materials," Semujju said.

He added that under such an arrangement, the first week of every one-month term should be for exams and the remaining three weeks for studies. "We, a poor country that is also grossly mismanaged must create our own conditions for survival,” Ssemujju added.

"The FDC feels very strongly that with creativity, we can fully reopen and put emphasis on observance of Covid 19 regulations. If schools do not open up during this time when the second wave is subsiding, we risk causing another stampede opening them very close to a third wave. Children such as senior one and five that had been earlier taught should report to schools next week for promotional exams," he said.

Ssemujju further said with Covid-19, government must also think about decongesting city markets and instead create regional markets where traders can pick merchandise instead of all congregating at Kikuubo. A similar measure should be done for food markets such as Kalerwe, Owino, Nateete, which are known distribution centres for foodstuffs such as onions and tomatoes.

Minister of Health spokesperson Emmanuel Ainebyoona said those with such suggestions should take them to the presidential science advisory board for consideration.

“Every decision the president has taken is based on science. If they have anything to say let them take it to that committee and if they find it sounds, they will recommend it to the president,” Ainebyoona said.

The FDC also demands full accountability of all the money released from the consolidated fund for purposes of fighting against Covid 19. Ssemujju said all donations received must also be accounted for most especially when there are several reports ranging from the Auditor General, whistleblowers and other Ugandans pointing to abuse and misuse of the covid money.

FDC alleges that some senior government officials have turned the fight against Covid into an enterprise - awarding themselves lucrative deals to supply various items which has caused delays in some cases, undersupply and all no supply.

Ssemujju cited a recent allegedly anomaly where UNICEF in a social media post claimed to have donated 500 oxygen cylinders but the ministry of Health only accounted for 100. In the first lockdown, FDC says food items such as eggs, milk rice are reported to have disappeared without trace.

Further, the money for vulnerable people distributed by Prime Minister Robinah Nabbanja did not reach all the intended beneficiaries, demanding that a full list of beneficiaries be immediately published.

0 #1 kabayekka 2021-08-03 12:33
Minister of Health spokesperson Emmanuel Ainebyoona said those with such suggestions should take them to the presidential science advisory board for consideration.

One wonders how the opposition with such nice suggestions can take them to a President and his cohort who they claim rigged the recent national election?

This is a long time serving African government that has won power by fighting battles. It is determined to win the COVID19 battle come what!
Report to administrator