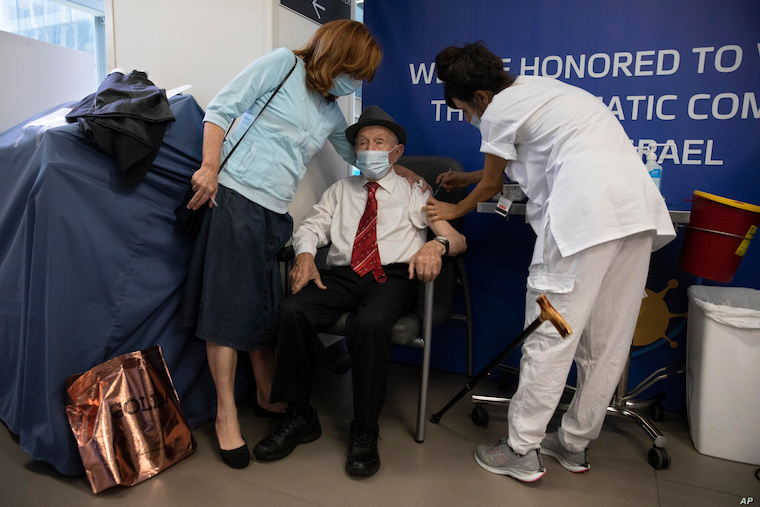 Israel has become the first country to distribute a third dose of COVID-19 vaccine, offering the extra jab to anyone over 60.

Israeli health experts say the effectiveness of the current vaccine declines with time and the third shot will serve as a booster. The move comes as virus rates in Israel are on the increase. Israeli Prime Minister Naftali Bennet announced the decision to offer a third vaccine dose to anyone over 60 who received their last shot at least five months ago.

“The decision was based on considerable research and analysis as well as the rise and risk of the variant delta wave. Israel has already vaccinated 2,000 immuno-suppressed people with a third dose with no severe adverse events and now we’re rolling out a national third dose campaign,” said Bennet.

An Israeli study showed effectiveness of the COVID-19 vaccine declined from 95% to 80% or even less against the delta variant. Neither the US nor the EU has yet recommended a third shot, but most Israeli doctors say they do not believe it will do any harm.

Dr. Ashraf Shalmon of the Israeli Health ministry said it is not yet clear how long even a third vaccine will provide protection.

“It seems that vaccines are not sufficient to give a very high protective level for a very long time without maybe having a third dose. Now a third dose could create another booster time which serves for six months, one year or it could behave like we see in some types of vaccines like hepatitis vaccines or papilloma vaccines where a third dose usually creates a long-lasting immunity,” said Dr. Shalmon.

Israel has also brought back its green pass regulations, meaning residents will have to show proof of immunization or a negative coronavirus test to enter many public places - including concerts, restaurants and gyms.

The decisions come as infection rates in Israel continue to rise, with more than 2,000 new cases reported each day. The percentage of COVID tests coming back positive is now more than three percent, double the rate of just a few weeks ago.

Israel was a leader in the vaccination campaign, and more than 60 per cent of the population has received at least one dose. Now Israelis hope a third dose will enable them to deal with the delta variant.

+1 #1 kabayekka 2021-08-03 01:47
It seems this country with all its copy technology is refusing to try to use the African tropical herbs as a remedy of some sort. It might just build up more the resistance to this constant attack of COVID19 variants.
Report to administrator