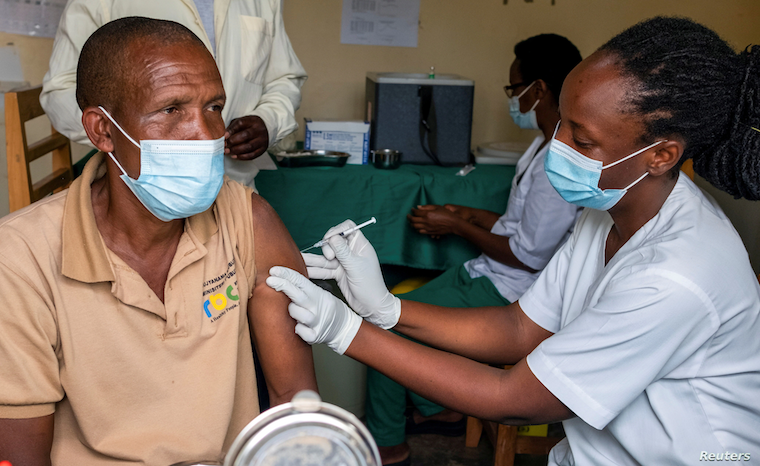 “The pandemic will end when the world chooses to end it,” World Health Organization (WHO) director-general Dr. Tedros Adhanom Ghebreyesus said Friday in Geneva about the global COVID-19 outbreak that is now being driven by the delta variant of the coronavirus.

US Centers for Disease Control and Prevention says the delta variant is as contagious as chickenpox and that infections in vaccinated people may be as transmissible as those in the unvaccinated.

“WHO’s goal remains to support every country to vaccinate at least 10% of its population by the end of September, at least 40% by the end of this year, and 70% by the middle of next year,” the WHO chief said, but added that the realization of the goals is “a long way off.”

He recalled that WHO had earlier “warned of the risk that the world’s poor would be trampled in the stampede for vaccines” and that “the world was on the verge of a catastrophic moral failure” because of vaccine inequity.

“And yet the global distribution of vaccines remains unjust,” Tedros said. “All regions are at risk, but none more so than Africa.”

“Many African countries have prepared well to roll out vaccines, but the vaccines have not arrived,” he said. “Less than 2% of all doses administered globally have been in Africa,” with only 1.5% of the continent’s population fully vaccinated.

The WHO chief said his organization was “issuing an urgent call” for $7.7 billion for the launching of the Rapid ACT-Accelerator Delta Response, or RADAR, a response to the delta surge that would provide tests, treatments and vaccines.

“The question is not whether the world can afford to make these investments,” Tedros said, "it’s whether it can afford not to.”

US President Joe Biden announced Thursday that civilian federal government employees must be vaccinated or submit to regular testing and wear masks.

On Friday, a reporter asked Biden as he was leaving the White House whether Americans should expect more guidelines and restrictions related to the coronavirus. “In all probability,” he said.

Mushrooming outbreaks of the highly contagious delta variant prompted China and Australia to impose stricter COVID-19 restrictions on Saturday as the WHO urged the world to quickly contain the mutation before it turns into something deadlier and draws out the pandemic.

China's most serious surge of coronavirus infections in months spread to two more areas Saturday -- Fujian province and the sprawling megacity of Chongqing.

More than 200 cases have been linked to a delta cluster in Nanjing city where nine cleaners at an international airport tested positive, with the outbreak spanning Beijing, Chongqing and five provinces as of Saturday.

The nation where the disease first emerged has rushed to prevent the highly transmissible strain from taking root by putting more than 1 million people under lockdown and reinstituting mass testing campaigns.

Worldwide, coronavirus infections are once again on the upswing, with the World Health Organization announcing an 80% average increase over the past four weeks in five of the health agency's six regions, a jump largely fueled by the delta variant.

First detected in India, it has now reached 132 countries and territories.

"Delta is a warning: it's a warning that the virus is evolving but it is also a call to action that we need to move now before more dangerous variants emerge," the WHO's emergencies director Michael Ryan told a press conference.

But both high- and low-income countries are struggling to gain the upper hand against delta, with the vastly unequal sprint for shots leaving plenty of room for variants to wreak havoc and further evolve.

In Australia, where only about 14% of the population is vaccinated, the third-largest city of Brisbane and other parts of Queensland state were to enter a snap COVID-19 lockdown Saturday as a cluster of the delta variant bubbled into six new cases. Australian Prime Minister Scott Morrison said Friday that 80% of adults must be vaccinated before the country will consider reopening its border.

"The only way to beat the delta strain is to move quickly, to be fast and to be strong," Queensland's Deputy Premier Steven Miles said while informing millions they will be under three days of strict stay-at-home orders.

'The war has changed'

The race for vaccines to triumph over variants appeared to suffer a blow as the US Centers for Disease Control released an analysis that found fully immunized people with so-called breakthrough infections of the delta variant can spread the disease as easily as unvaccinated people.

While the jabs remain effective against severe disease and death, the US government agency said in a leaked internal CDC document "the war has changed" as a result of delta.

An analysis of a superspreading event in the northeastern state of Massachusetts found three-quarters of the people sickened were vaccinated, according to a report the CDC published Friday.

The outbreak related to July 4 festivities, with the latest number of people infected swelling to 900, according to local reports. The findings were used to justify a return to masks for vaccinated people in high-risk areas.

"As a vaccinated person, if you have one of these breakthrough infections, you may have mild symptoms, you may have no symptoms, but based on what we're seeing here you could be contagious to other people," Celine Gounder, an infectious diseases physician and professor at New York University, told AFP.

According to the leaked CDC document, a review of findings from other countries showed that while the original SARS-CoV-2 was as contagious as the common cold, each person with delta infects on average eight others, making it as transmissible as chickenpox but still less than measles. 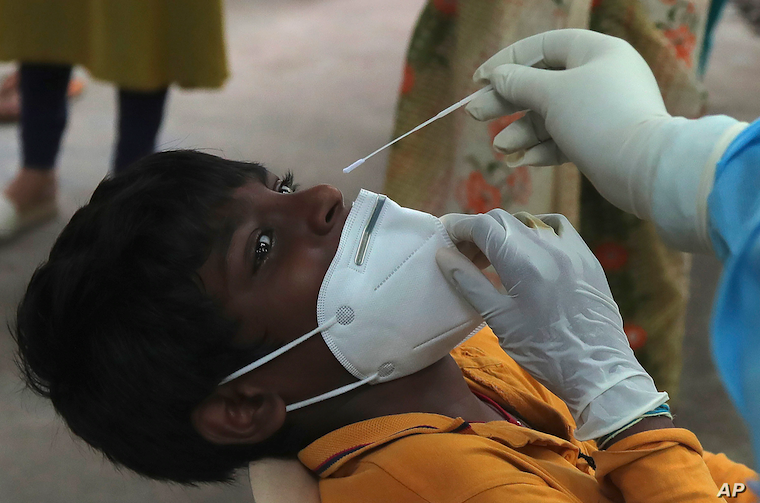 Reports from Canada, Scotland and Singapore suggest delta infections may also be more severe, resulting in more hospitalizations. Asked if Americans should expect new recommendations from health authorities or new restrictive measures, U.S. President Joe Biden responded, "in all probability," before leaving the White House by helicopter for the weekend.

He did not specify what steps could be taken. In Israel, health officials began administering coronavirus booster shots Friday to people older than 60 who have been fully vaccinated in an effort to stop a recent spike in cases.

Italy’s Health Institute announced Friday that the delta variant accounted for almost all new COVID-19 cases in the country at nearly 95% of cases as of July 20.

German officials announced that unvaccinated travelers arriving in the country will need to present a negative COVID-19 test result.

The Johns Hopkins Coronavirus Resource Center on Saturday reported there have been more than 197 million global COVID-19 infections.

Where the national treasury is not touched in the fight against the pandemic so that massive national debts can be paid.

Of recent, this African country borrowed so much money and right now it badly needs tax revenue from donated COVID19 to buy pick-up trucks, to continue to run government expenditures as politics dictates.

To try and vaccinate 20 million people is out of the question. The country would rather continue into a partial lockdown or a third fully fledged COVID19 lockdown with the help of the police and military and a full night curfew!
Report to administrator
0 #3 kabayekka 2021-08-02 20:07
One cannot understand some African governments. Recently with the knowledge of the Director General of WHO, Malawi destroyed thousands of vaccines.

It is the same world authority now warning of the risk that the world’s poor would be trampled in the stampede for vaccine and that “the world was on the verge of a catastrophic moral failure” because of vaccine inequity!
Report to administrator