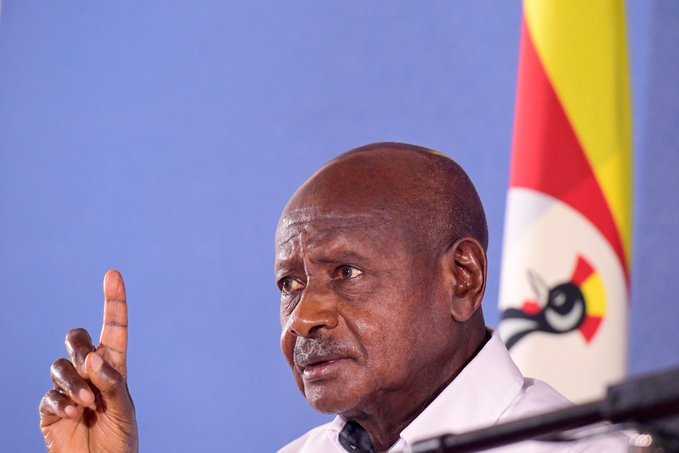 President Yoweri Kaguta Museveni has relaxed the COVID-19 lockdown restrictions that he had announced on June 18. The relaxed restrictions include lifting a ban on private and public transport and the inter-district movement ban, among others.

However, the president said that private cars are only allowed to carry three people including the driver while public transport vehicles are authorized to carry only 50 per cent of their capacity. He told the country in an address on Friday evening that the decline in COVID-19 positive cases and deaths necessitates relaxing some of the restrictions.

Boda bodas have also been allowed to carry one passenger on the condition that both are wearing a face mask.

The Kikuubo shopping centre has been opened provided that all kiosks and roadside vendors are relocated to other areas. Malls, arcades and other businesses have been reopened provided they comply with all SOPs including having adequate lighting, entry and exits, CCTV cameras, proper hygiene, registration of owners of shops among others. Public gatherings such as burials and weddings have been restricted to only 20 people.

Museveni’s decision to open up the country was based on the advice and modelling by the National Planning Authority (NPA) which said that if the country fully opens up, there will be 500 new cases per day averaging 2,000 cases per week and this would take the country to the third wave.

The second option was maintaining the lockdown which would see only 30 new cases averaging 246 new cases every week. However, this option would be devastating economically not only for Ugandans but also the economy at large.

The last option which the president adopted would be the partial reopening which would see an increase to 301 new cases per day which would eventually fall to 66 new cases per day by the 28th day. In the new measures, curfew time has been maintained at 7 pm to 5:30 a.m., except for security personnel and those authorized to move at night.

“The rest should be in their homes to avoid breaching of guidelines and thuggery under the cover of darkness. There will be too much socialization in the night and that is where the trouble will be,” Museveni said.

However, places of worship will remain closed until 60 days when the decision will be reviewed. And for virtual religious services that have been allowed, they have been restricted to only 10 people while outdoor sports activities are allowed without spectators and under strict SOPs. However indoor sports activities including gyms and pool table remains closed.

Also to remain closed are gaming, betting, cinema, casinos, concerts, bars, saunas, and steam baths. Also banned are seasonal markets, mobile markets, conferences, workshops and seminars unless with permission from the ministry of Health. This decision will be reviewed after another 42 days.

Schools are also to also remain closed until learners between the age of 12 and 18 have been fully vaccinated. However, the president said the Ministry of Health working with that of education should work out modalities to see medical schools opening.  For the public and formal sectors, staff levels have been revised from 10 to 20 per cent.

We need a revolution of the most sincerely "violent" Kind to save ourselves from these people.
Report to administrator
0 #2 kabayekka 2021-07-31 21:52
Indeed if these measures are not adopted especially the failure of this government to immunize over 25 million people by the end of August, a third lockdown is most likely to be put in place in this poor African country.

And not many people are likely to want to visit this country for business and tourism if the threat of catching COVID19 is looming!

This country must learn that even for parliamentary democracy, if it is not properly done, the international community will continue to look at this modern country as a very bad and dangerous African dictatorship trying its best to cloth in African democracy!
Report to administrator
+2 #3 Remase 2021-08-01 06:24
What do Ugandans need know and see in order to realise that we must get rid of M7 and have a meaningful fundamental change?

If to this date M7 is only relying on donations of the vaccine, yet the govt received money to buy them but haven't!

And then M7 orders that schools will open only after vaccination of children aged from 12 to 18! Wow! The lockdown is not the answer here and a total madness of a nonfunctional govt that's hell bent on rooting our country naked!
Report to administrator
+2 #4 Lysol 2021-08-02 02:38
The corrupt killer old man should leave the matter of science to scientists. It's not over until it is allover with COVID-19.
Report to administrator
+1 #5 WADADA rogers 2021-08-02 17:37
He gives with one hand and takes with another, why on earth would the President direct for opening of malls and arcades and then a mere minister says they will not open until he has verified.