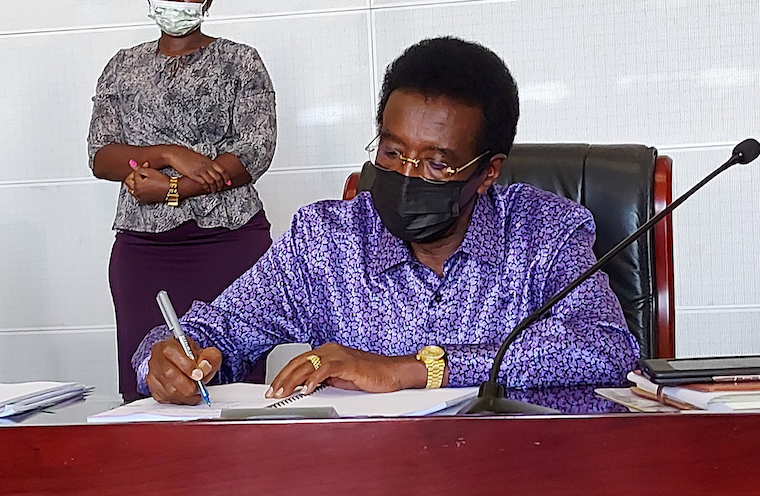 The High court in Kampala has fixed dates to decide on two separate filed applications challenging the decision by the government to install surveillance devices in vehicles and other vessels.

The two applications were filed by city lawyer Male Mabirizi and Legal Brains Trust, a not for profit organization headed by lawyer Isaac Ssemakadde. Last week, the government signed a contract with Joint Stock Company, a Russian digital security company to provide digital trackers to all vehicles in the country.

Speaking at the signing ceremony, Maj Gen Jim Muhwezi the minister of Security assured the country that the only purpose for which the government is going to track vehicles using GPS is to deal with insecurity. He added that they have no intention of interfering in the privacy of citizens.

However reports later emerged that the Russian firm is facing bankruptcy litigation in Moscow, court documents in Russia reveal. The company is also facing other debt-related cases filed between 2019 and 2021 in Russia.

Specifically, Legal Brains Trust asked the court to issue a temporary injunction restraining the government and all her agents from enforcing the presidential directives, cabinet resolutions, agreements, contracts, statutory instruments and other documents by whatever name called; through which the government wants to execute a programme of compulsory digital surveillance of all motor vehicles, motorcycles and other vessels in Uganda pending the determination of their main suit which is challenging the legality of the decision.

“The impugned conduct of the respondent/Attorney General goes beyond the permissible exercise of state power to support law enforcement and engender national security. It is manifestly intrusive, plainly unlawful, and unacceptable and demonstrably unjustifiable in a free and democratic society," reads the application in part.

It adds that “unless restrained by this honourable court, the conduct of the respondent and other persons or authorities interested in the impugned surveillance programme will create a chilling effect on freedom of expression, freedom of association, freedom of movement and a bundle of other rights and freedoms, and is thus detrimental to the public good or welfare or good governance.

As such, the court heard that to foster Uganda’s efforts to combat crime without compromising citizens’ constitutional values, the court should issue an interim injunction.

But when the matter came up for hearing before justice Boniface Wamala, court directed lawyer Stanley Okecho who was representing Legal Brains Trust to serve a copy of their application to the Attorney General such that he can make his response to enable the court to deliver its ruling on an application for an interim injunction on September 10, 2021.

The Attorney General was represented by the director of civil litigation Martin Mwambutsya who was accompanied by principal state attorney Geoffrey Atwine.

Earlier, the same court first proceeded on a similar case by Mabirizi, who is seeking a permanent injunction prohibiting any Uganda government official from implementing or acting on the strength of the cabinet decision requiring every motor vehicle to be fitted with tracking devices at the owner cost on grounds of being unconstitutional.

But on this, the parties have been directed to put in their written submissions and the judgement will be on September 30th 2021.

Asked to comment about the decision to give him a judgement date two months from now, Mabirizi said that it is okay because his application is omnibus and challenges several decisions he described as complicated, which also need more time if just was to be delivered.

Another Heist and compounded Dictatorship. How different are we from North Korea?

Of all people it has to be Gen Jim Muhwezi to sign the deal. Gen. Muhuwezi, Dishonorable Kaboyo, Gen Salim Saleh, etc are all Gen Tibuhaburwa's shameless hired thieves,.

In my 7th Sense of reading tea-leaves; those behind the justification for the CCTV Cameras and now the mandatory Vehicle tracking device for all Vehicles and motorcycles in Uganda, are the Prime Suspects of all the Boda executed assassinations.

In other words, to make a justification for his deal,they bugged Gen Wamala's Vehicle trailed him, presto and bang it worked.

Otherwise, we are in the Prophetic Orwellian 1984. in the whole wide world which country with or without the worst crime record has mandatory car tracking for all mortotists. In other words,

How many Russian Vehicles and motor cycles have been bugged?
Report to administrator
0 #3 Lakwena 2021-08-02 10:11
Let Muhwezi start with all his (family) vehicles and move onto Gen Tibuhaburwa and Family's vehicles.

In other words, these guys have committed all the crimes (Capital and petty) under the sun, for which they now arrogate themselves to be fighting. As a result they want to criminalize the whole country and declare themselves Saints.

God where are you?
Report to administrator
0 #4 Lakwena 2021-08-02 10:22
Who does not know that Gen Muhwezi is the usual suspect (a corrupt and organized criminal)?

In other words, while in political Limbo, out of Parliament/ Government and hanged to dry; the guy was not sleeping, but networking and scheming for this grand security related scam deal with deadly Russian Mafia.

Eish! Wachireba?
Report to administrator
0 #5 Mweru Samuel Byachi 2021-08-02 10:48
The challenge with many of our policy decisions is that we do not sell them to the public to appreciate their benefits and thus the rush to courts of law.

I recall H.E pronounced himself on digital trackers over a year ago which should have been sufficient time to sell the proposal to the public.
Report to administrator