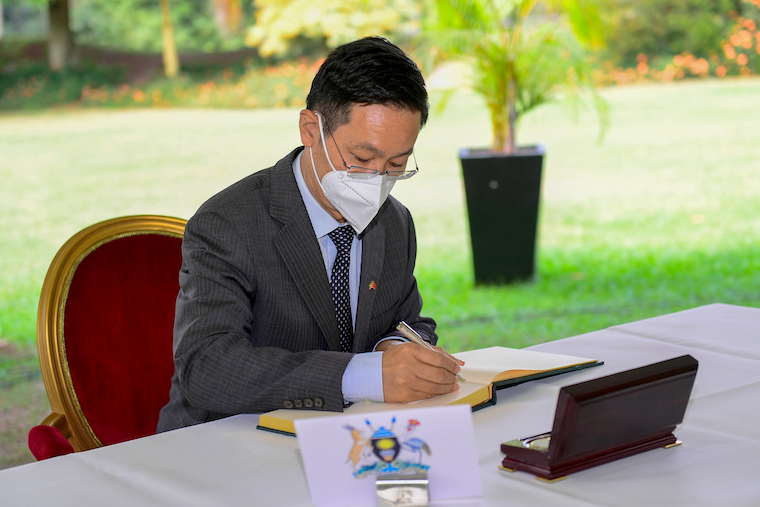 China has donated 300,000 doses of the Sinovac-CoronaVac COVID-19 vaccines to Uganda. The vaccines are expected to arrive in the country this Saturday, according to the new Chinese Ambassador to Uganda Zhang Lizhong.

This will be the first consignment of another type of vaccine to come to Uganda after AstraZeneca which has been used to inoculate more than one million people since the start of the exercise in March.

The Sinovac-CoronaVac COVID-19 vaccine was validated in June by the World Health Organization (WHO) for emergency use, giving countries, funders, procuring agencies and communities the assurance that it meets international standards for safety, efficacy and manufacturing. The vaccine is produced by the Beijing-based pharmaceutical company Sinovac.

The organisation recommended its use as two doses of 0.5 ml each given intramuscularly, with an interval of 2–4 weeks between the first and second dose. Sinovac has delivered more than 1 billion doses of the vaccine, to among others, Brazil, Turkey, The Philippines, Indonesia and Chile.

The arrival of the Sinovac consignment was confirmed at a meeting in State House, Entebbe, where the new ambassador was presenting his credentials to President Yoweri Museveni on Tuesday evening.

During the meeting, Museveni hailed the excellent relationship between Uganda and China especially the support in the economic fields and added that Uganda is looking forward to scientific cooperation with China in the development of the COVID-19 vaccines.

“We have had a very good relationship with China for a very long time. We are grateful for the support China has given to us; the stadium, soft loans, and other programs and projects. We are now looking at the Standard Gauge Railway,” Museveni said.

He also noted that the economic rise of China should be an opportunity for more cooperation including business. On his part, Lizhong said that China will continue to support the economic transformation and industrialization of Uganda, and will encourage more Chinese investors to come and do business in Uganda as the investment environment and security are very conducive.

“This part of the world is very fertile with a lot of water and nice climate. When Europeans came, they said we had too much rain and water in swamps and started planting water-drying species. A culture some of our people inherited by cultivating in the wetlands. Now [we] want to reverse that,” Museveni said.

He added that in some cases, they may have to pay compensation for people who were misled by governments to leave the swamps while those who willingly invaded wetlands would be chased out.

“These swamps are tributaries of the Nile but with aquatic species. For those misled by governments and colonialists, we shall have to compensate them but those who intentionally invaded swamps and forests, we shall just chase them but we shall not take them to prison but no compensation. Once we bring back full nature, very fertile and can support a big part of Africa in terms of food and raw materials we want to stop this sacrilege,” he said.

Museveni also singled out the issue of refugees in relation to land, relief, alternative energy and education.

“We have got 1.6 million refugees whom you are feeding but they are really cutting our trees. UN secretary-general Antonio Guterres came and organized fundraising and got money for one or two roads in refugee areas which is good but work on another form of energy other than biomass. We can work with our people about alternative energy like biogas,” Museveni said.

The president said if refugees get relief and the issue of energy, which is not depending on trees, is solved and provision of water and education for their children, they will be happy and not cause any deficit. He also urged the UN to have a policy of pre-fabricated shelter to avoid the use of trees. Namondo from Cameroon on her part pledged to work for the continued support from the UN to Uganda especially in achieving the country’s SDGs.

“My job here is to work with all colleagues and see how to support your development plans,” she said.

0 #1 kabayekka 2021-07-30 16:40
One hopes that this Sinovac COVID19 vaccine will not have to involve the UN and China to bring in their own expertise to immunize the population of this country.

If this country in the first COVID19 lockdown had learnt any lessons, and relied on its own resource to administer this vaccine, about 20 million citizens would by now be vaccinated without the need for a second lockdown.

If part of the police, the army and the educated public came together to follow an organized immunized program for the 47 million people of this country, without a curfew or lockdown, working 24 hours a day 7 days a week, by August 2021 this country would be living normally.
Report to administrator
0 #2 kabayekka 2021-07-30 16:49
Mind you the year 2022 is soon on its way and this country is not going to continue to play COVID19 Delta games again as it has been doing this year.

A new total budget cost to vaccinate and to improve on the dilapidated hospitals for the future of this country must be discussed and put in place now.

Certification of Immunization of COVID19 on humans is currently in medical terms only one year.
Report to administrator
0 #3 kabayekka 2021-07-30 22:17
Therefore if it takes eight months for Uganda to immunize all its population of 47 people by international standards, that means that by the end of the year 2021, a new beginning of immunization should be starting by January 2022 if the constant curfew and incessant lockdowns continuously delay the medical fight against COVID19 Delta!
Report to administrator