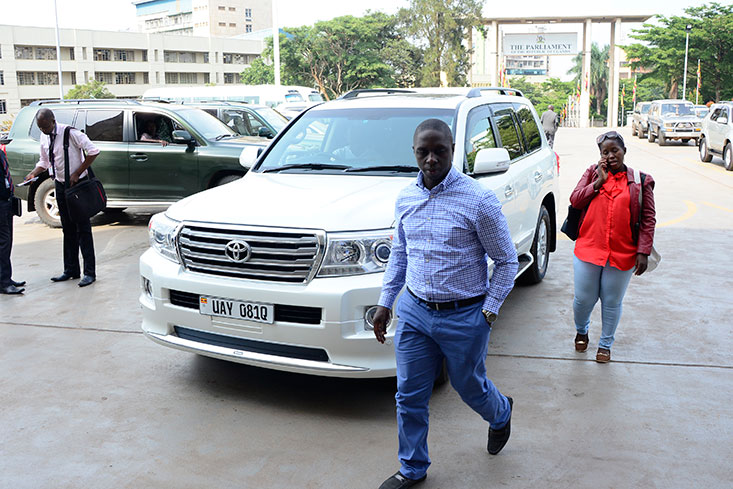 Opposition Forum for Democratic Change (FDC) party has reiterated calls for the scrapping of MPs vehicle cash, saying Uganda is too poor to afford such a venture for so many legislators.

The call comes less than a week after 529 MPs and 26 ex-officios each received Shs 200 million on their accounts to purportedly buy themselves a car. No accountability is needed for this money, and the latest payout has once again drawn public ire especially at a time when most Ugandans continue to suffer the financial bluntness of the Covid-19 lockdown and restrictions.

Speaking at the party’s headquarters at Najjanankumbi in Kampala on Monday, FDC spokesperson and one of the MPs who got the money, Ibrahim Ssemujju Nganda said the government must adopt a policy where all its employees including MPs should be just given interest-free loans recovered from their monthly salaries to buy for themselves cars.

"The Forum for Democratic Change wants the policy of giving MPs free money to buy vehicles abolished instead the MPs should be facilitated with interest-free loans to buy vehicles for those who are interested because it is not mandatory that each MP must buy a car. There are those who don't actually buy them but if there are MPs who want to buy vehicles, interest-free loans can be extended. The money should then be deducted from their salaries monthly. The idea of free vehicle, free money is very costly to a needy country like Uganda where the size of parliament keeps growing. If we're dealing with 50 MPs maybe one can understand, but 529 MPs including ex-officios is a luxury and you spend She 500m buying a vehicle for someone who can even use a vehicle to town," said Ssemujju.

Asked whether by this stand, FDC will then compel its 32 MPs who received to return the money, Ssemujju said it's up to the individuals to decide what to do with the money. He said even if opposition MPs returned the money as some Ugandans have said, the move will be inconsequential.

"You need a policy to have everybody return the money. You can't say; you FDC you return the others can't take, no. We just have to have that policy abolished such that that money is not budgeted for at all. The individual MPs will make their decision because right now this is a moral issue. In the past, some MPs have returned money others have not. The party didn't even need to ask, when I returned money for togikwato [constitution amendment consultation allowance] I was not asked by the FDC. So this decision remains a personal decision," Ssemujju said.

On whether it is a right for MPs to take money yet the country is in the middle of a Covid-19 pandemic, Ssemujju said the principle remains that it is wrong to give money any time.

"The timing is useless, whether you take the money in January or December or next year you still would have taken the money. So the ones who are speaking about the timing, I think the intention is to win public sentiments but for me, it changes nothing. Whether you take it at the beginning of lockdown or after the lockdown, it will still be money lost. So the timing doesn't bother me. That policy is a bad policy, it doesn't matter whether you're under a lockdown, whether you're under Covid or not Covid. When I moved that motion there was no Covid in Uganda. FDC thought then and still thinks today that that money can be channeled to do other things," added Ssemujju.

In the 10th parliament, Ssemujju who was then chief opposition whip introduced a motion to have the government stop buying cars for its employees. He met with the minister of Public Service Muruli Mukasa who said it was a good policy that government would embrace.

However, he asked that they first ascertain the number of cars that government has and then would report to parliament on the way forward. But according to Ssemujju that was the last time he heard from the minister.

FDC has also called upon President Museveni not to extend the current lockdown when it runs out on Thursday this week.

Museveni last month locked down the country for 42 days to contain the spread of coronavirus disease.  Ssemujju said although as a party they supported the lockdown that was announced on June 18 as a measure to slow the spread of Covid-19, it can’t be a permanent solution because the economy cannot be stretched by the lockdown any further.

Ssemujju said instead the government should speed up the process of buying vaccines so that people are vaccinated to safely return to their work.

"In principle as a party, we supported lockdown which is a temporary measure to slow down the spread of corona and recommended by scientists and done by almost everybody. However, we don't support this temporary measure becoming permanent that for you, you're going to permanently lock people in their houses. This is supposed to be a temporary measure. On Thursday, therefore, our demand is that Mr Museveni must relax on the lockdown measures to allow citizens access their workplaces, public and private transport should resume but under some strict measures such as hand washing, use of sanitizers and wearing of masks. At worst, we should return to the zonal lockdown. If a particular area is experiencing a rise in infections you can lockdown that area but you can't lockdown the entire country," he said.

At the time when the country cannot even afford to buy the Covid-19 vaccines, Uganda is buying cars for the MPs. What a shame.

This is not why they were elected, their constituents expect them to work for development of the country and not self-enrichment. When are sub-Saharan African leaders going to wake up. The rest of the world is leaving the region behind.
Report to administrator
+1 #2 kabayekka 2021-07-27 22:25
How come this country only waits for vaccine donations from overseas and cannot use its own resource to buy the vaccine?
Report to administrator
+1 #3 Decimon Wandera 2021-07-27 23:26
I commend Semujju for his suggestion that we get a policy on Car acquisition for the MPs. Though I agree that MPs need cars, like any well-paid workers they should be in a position to afford to buy the cars from their salaries.

Secondly, if we do not succeed in the Notion of getting a policy as Semujju opines, then let the government take the responsibility of procuring these cars for them and retain the ownership of those cars such that at the end of every term of a political business, they are auctioned or refurbished and given to civil servants in the various government ministries, for example, education, health, among others.
Report to administrator
0 #4 Decimon Wandera 2021-07-27 23:28
We can't sustain the job of buying cars to career politicians who have stayed in parliament for decades.

this is why the citizenry keeps on losing hope and trust in our leaders because of always prioritizing themselves when actually they are already privileged- look at the vaccination against covid-19, who were prioritized? i

t is them, where did they leave the common man? how did they categorize him? the less or non-essential. this social, political, economic, health stratification of people and society is not good for a developing country more especially if it is done by the leaders. we would rather leave it to natural forces.


i
Report to administrator
0 #5 Decimon Wandera 2021-07-27 23:29
It's therefore not wondering if the ordinary people ask for their bargain of cake during the elections or if they choose to vote in the way which annoys the coward elites.

Let us fix our priorities especially in a crisis like this one, you don't want to provocatively show the poor woman locked down in her house with three kids on an empty stomach that their lives are a none issue, what matters is the car for the MP.
Report to administrator