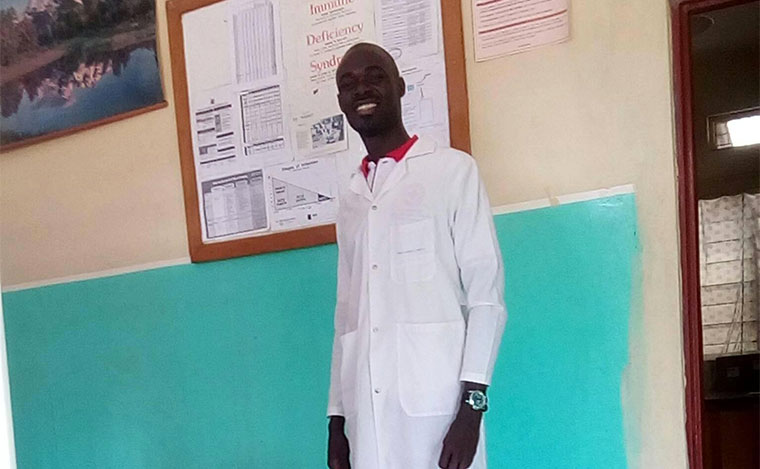 Police in Karenga district in Karamoja sub-region, northeastern Uganda has arrested a laboratory technician attached to Kapedo health centre III for allegedly refusing to carry out a test on Covid-19 suspects, demanding to first be paid his allowance.

Robert Lamson Okidi was arrested on Saturday afternoon following the death of two patients whose blood samples he refused to take to ascertain their sickness to make it easy to administer treatment on them. This week, the ministry of Health informed nurses across the country that their unpaid allowances will be paid next month and not this month as earlier communicated.

Samuel Mpimbaza Hashaka, the Karenga resident district commissioner (RDC) who also doubles as chairman district task force on Covid-19 said that the arrest of Okidi was prompted by the report by the health officer in charge of Kapedo to the district task force. According to Hashaka, Dr Maruk Marmar Lousi reported to the task force that one of his staff had refused to work claiming he wants to be paid first.

"It's against this that I ordered for the arrest of the lab technician because he shouldn't have refused to attend to the patients," Hashaka said.

Lousi, the officer in charge of Kapedo health centre III when contacted, confirmed that Okidi had refused to work, causing the death of two people who had presented signs of Covid-19.

"I tried to plead with the guy to work but he became rough [with] me, so we couldn't guess what treatment to give the patients without knowing what they were suffering from so these patients died just like that," he said.

Betty Awilly, one of the village health team (VHTs) attached to Kapedo health centre said the lab technician has been arrogant towards patients, adding that sometimes he comes to the health centre on his own time.

"Sometimes I ask myself why do people cry for jobs and when God blesses them with the jobs they become a stress to the local community," she said.

Majid Sentosi, the district police commander Karenga confirmed the arrest of the officer saying he will be charged with negligence.

"We have him in our custody and our file is almost ready, we will produce him before court to answer charges of negligence," he said.

+2 #1 MR 2021-07-26 11:36
I agree this lab technician should be held accountable for neglecting his job but making a case of murder would be hard/nearly impossible.

But if that's the route they want to follow then the Gov't should also be held responsible on grounds of not facilitating his dues to carryout his job.

As for Betty Awilly why not fire his if he was acting unprofessional from the start. Like you said too many jobless people who could easly take his position
Report to administrator
+5 #2 Dr Simon Sseguya 2021-07-26 12:48
The in-charge should explain what care was provided to prevent the death of these people since he has confessed that both victims presented with clear signs and symptoms of covid-19.

A positive laboratory test is not a pre-requisite for supportive case management since covid-19 does not have any known curative medicine. The indiscipline of the lab technician can be dealt with under the Standing Orders but the real issue is the failure of the in-charge to ensure the provision of basic healthcare services which could have saved lives.

The in-charge definitely has a case to answer in stead of simply throwing the lab technician under the bus.
Report to administrator
0 #3 kabayekka 2021-07-26 14:26
That is what most citizens in this country are saying.

All those who want justice to be done properly should not bother to take their cases to the NRM judiciary because the judges have that inclination or prejudice for or against one person or group, especially in a way considered to be unfair. It is a waste of money to pay the lawyers in this country when they cannot win their court cases.
Report to administrator
0 #4 Musil 2021-07-26 14:45
I guess there's something wrong here when you look at the TAT for PCR result it takes quite sometime I know the lab personal did bad to refuse to offer his services.

Most of theses so called in charges when covid-19 money comes since they have signitory to these accounts they don't consider others.

Since there has been a complain about the same lab personal they should have transfered him otherwise thorough investigation needs to be done. Besides covid-19 manager does not wait for the results as long as the person presented with signs and symptoms.