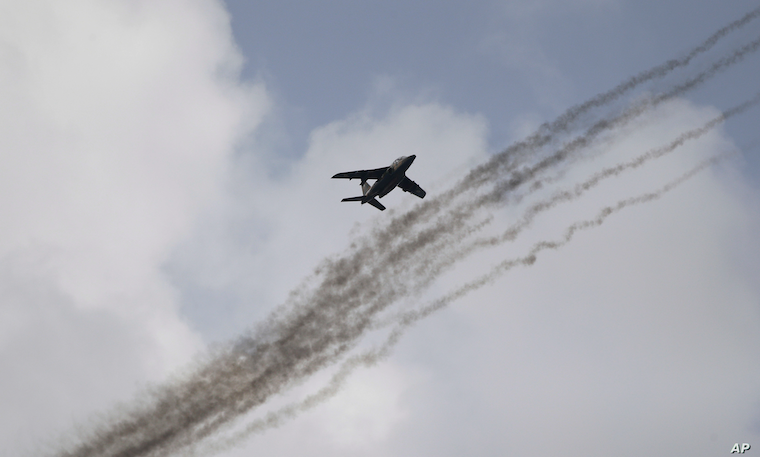 Nigeria's air force says armed bandits have for the first time shot down one of their fighter jets.

It says the jet was shot down Monday as it conducted an airstrike against criminal gangs in northern Kaduna and Zamfara states. An air force spokesman said the pilot ejected safely but analysts and critics warn the attack shows a previously unknown level of firepower and threat to stability.

Officers cheered at a military base in Kaduna as the pilot of the ill-fated Alpha attack jet, Abayomi Dairo, arrived back on the base Monday. The Nigerian air force statement said Dairo ejected from the jet shortly before it crashed and also survived intense ground fire from the bandits.

Nigerian authorities have increasingly turned to air operations to decimate criminal gangs, locally referred to as bandits, operating in the country's northwestern regions. Authorities say hundreds of bandits have been killed in airstrikes in recent weeks.

But security analyst Senator Iroegbu says the downing of the fighter jet shows the bandits are getting emboldened.

"It's alarming that the so-called bandits have so much capacity and capability because to bring down an Alpha jet... meaning they could have air missile[s]. I'm not sure an ordinary anti-aircraft gun could have brought down such a jet," Iroegbu said.

More than 1,000 school students have been kidnapped since December. Most have been freed through negotiations, but some are still being held captive.

Iroegbu said he suspects the ransom money paid to kidnappers is being used to purchase more sophisticated weapons. "This is their way of getting more money to acquire more weapons for whatever they're doing," he said.

Authorities strongly oppose ransom payment to bandits. Last month, authorities moved to enact a law that criminalizes the payment of ransoms and punishes those who do with up to 15 years in prison. The bill has been met with resistance and is being reviewed.

In May, eleven top ranking military officers, including the chief of the army, were killed in a plane crash in northwest Kaduna state. Officials said that crash was caused by bad weather, and there have been no claims the plane was shot down.

+3 #1 kabayekka 2021-07-22 10:25
Why did the Nigerian Air Force think that they have the monopoly to buy arms from the global markets of military equipment?

Most African leaders who are war mongers forget that when they buy sophisticated armament for themselves to stay put in power, the arms dealers devise a profitable plan and sell updated arms to their enemies that can easily destroy their new acquired military hardware!
Report to administrator
+1 #2 kabayekka 2021-07-22 10:37
It is unfortunate that the Nigerian Federal government is wasting valuable resource to promote a never ending civil war in its backyard which can last another 30 years.

That is why ECOWAS was enacted to try and stop such wasteful civil conflicts on the continent of Africa.

Nigeria like Ethiopia should be having over 200 airline planes flying all over the world than being bothered to buy these expensive but obsolete military Alpha jets in a civil war of brother fighting brother!
Report to administrator