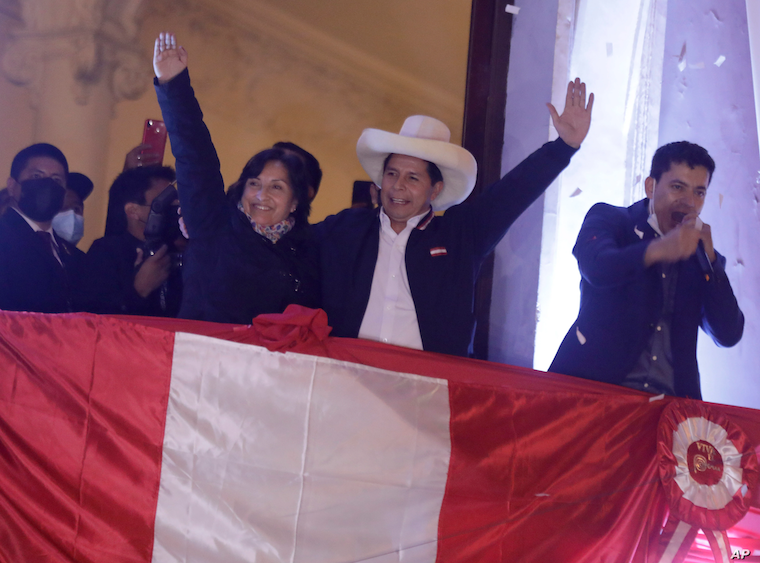 Pedro Castillo, center, celebrates with his running mate Dina Boluarte after being declared president-elect of Peru by election authorities, at his party´s campaign headquarters in Lima Peru

Wielding a pencil the size of a cane, symbol of his Peru Libre party, Castillo popularized the phrase "No more poor in a rich country."

The economy of Peru, the world's second-largest copper producer, has been crushed by the coronavirus pandemic, increasing the poverty level to almost one-third of the population and eliminating the gains of a decade.

The shortfalls of Peru's public health services have contributed to the country's poor pandemic outcomes, leaving it with the highest global per capita death rate. Castillo has promised to use the revenues from the mining sector to improve public services, including education and health, whose inadequacies were highlighted by the pandemic.

"Those who do not have a car should have at least one bicycle," Castillo, 51, told The Associated Press in mid-April at his adobe house in Anguía, Peru's third poorest district.

Since surprising Peruvians and observers by advancing to the presidential runoff election, Castillo has softened his first proposals on nationalizing multinational mining and natural gas companies. Instead, his campaign has said he is considering raising taxes on profits because of high copper prices, which exceed $10,000 per ton.

Historians say he is the first peasant to become president of Peru, where until now, Indigenous people almost always have received the worst of the deficient public services even though the nation boasted of being the economic star of Latin America in the first two decades of the century.

"There are no cases of a person unrelated to the professional, military or economic elites who reaches the presidency," Cecilia Méndez, a Peruvian historian and professor at the University of California-Santa Barbara, told a radio station.

Fujimori, a former congresswoman, ran for a third time for president with the support of the business elites. She is the daughter of imprisoned former President Alberto Fujimori.

Hundreds of Peruvians from various regions camped out for more than a month in front of the Electoral Tribunal in Lima, Peru's capital, to await Castillo's proclamation. Many do not belong to Castillo's party, but they trust the professor because "he will not be like the other politicians who have not kept their promises and do not defend the poor," said Maruja Inquilla, an environmental activist who arrived from a town near Titicaca, the mythical lake of the Incas.

Castillo's meteoric rise from unknown to president-elect has divided the Andean nation deeply. Author Mario Vargas Llosa, a holder of a Nobel Prize for literature, has said Castillo "represents the disappearance of democracy and freedom in Peru." Meanwhile, retired soldiers sent a letter to the commander of the armed forces asking him not to respect Castillo's victory.

Fujimori said Monday that she will accept Castillo's victory, after accusing him of electoral fraud without offering any evidence. The accusation delayed his appointment as president-elect as she asked electoral authorities to annul thousands of votes, many in Indigenous and poor communities in the Andes.

"Let's not put the obstacles to move this country forward," Castillo asked Fujimori in his first remarks in front of hundreds of followers in Lima.

The United States, European Union and 14 electoral missions determined that the voting was fair. The U.S. called the election a "model of democracy" for the region.

Steven Levitsky, a political scientist at Harvard University, told a radio station that Castillo is arriving to the presidency "very weak," and in some sense in a "very similar" position to Salvador Allende when he came to power in Chile in 1970 and to Joao Goulart, who became president of Brazil in 1962.

"He has almost the entire establishment of Lima against him," said Levitsky, an expert on Latin American politics.

The president-elect has never held office. He worked as an elementary school teacher for the last 25 years in his native San Luis de Puna, a remote village in Cajamarca, a northern region. He campaigned wearing rubber sandals and a wide-brimmed hat, like the peasants in his community, where 40 per cent of children are chronically malnourished.

In 2017, he led the largest teacher strike in 30 years in search of better pay and, although he did not achieve substantial improvements, he sat down to talk with Cabinet ministers, legislators and bureaucrats.

Over the past two decades, Peruvians have seen that the previous political experience and university degrees of their five former presidents did not help fight corruption. All former Peruvian presidents who governed since 1985 have been ensnared in corruption allegations, some imprisoned or arrested in their mansions. One died by suicide before police could take him into custody. The South American country cycled through three presidents last November.

Castillo recalled that the first turn in his life occurred one night as a child when his teacher persuaded his father to allow him to finish his primary education at a school two hours from home. It happened while both adults chewed coca leaves, an Andean custom to reduce fatigue.

"He suffered a lot in his childhood," his wife, teacher Lilia Paredes, told AP while doing dishes at home. The couple has two children.

He got used to long walks. He would arrive at the classroom with his peasant sandals, with a woolen saddlebag on his shoulder, a notebook and his lunch, which consisted of sweet potatoes or tamales that cooled with the hours.

Castillo said his life was marked by the work he did as a child with his eight siblings, but also by the memory of the treatment that his illiterate parents received from the owner of the land where they lived. He cried when he remembered that if the rent was not paid, the landowner kept the best crops.