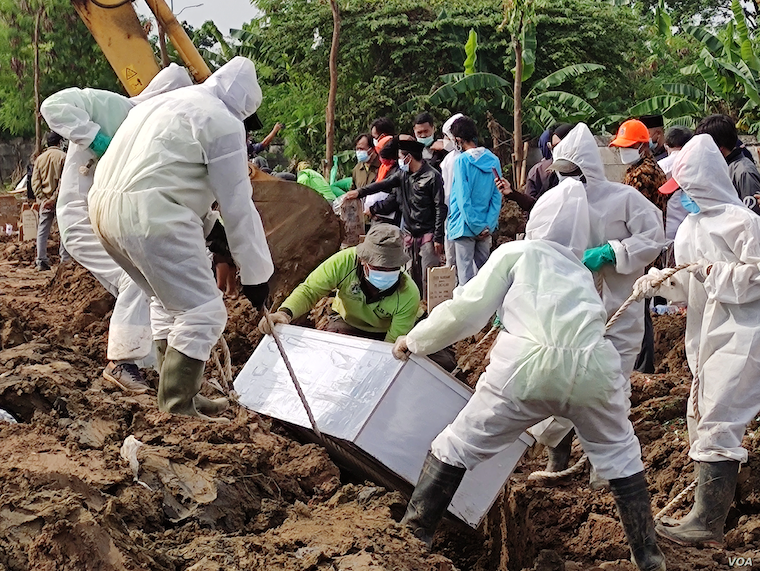 A mortuary team in full hazmat suits lowers the casket of a COVID-19 victim at a special cemetery in TPU Rorotan, north Jakarta, Indonesia

COVID-19 is taking a devastating toll on medical professionals in Indonesia, where 114 doctors have died so far this month, more than double the number of doctors who died in June, according to a physicians’ network known as the Mitigation Team of the Indonesian Medical Association, or IDI.

The rising number of doctor deaths comes as the government notes that 95 per cent of health workers have received COVID-19 vaccines.

On Sunday, the chief of the mitigation team, Mahesa Paranadipa Maikel, told the press in Jakarta that the doctor monthly death toll is the highest since the start of the pandemic in March of 2020. The record was last set in January 2021, when 65 doctors died.

A total of 545 doctors in Indonesia have died since the beginning of the pandemic. The highest death toll is in East Java with 110, followed by Jakarta with 83 and central Java with 81. In all of June, 51 doctors died, but that toll has jumped 123 per cent so far this month.

“These numbers might be higher since there are hospitals or clinics that have not reported to us,” said Mahesa.

Most of the doctors who died due to COVID-19 were general practitioners, obstetricians, internists and surgeons. COVID-19 is the illness caused by the coronavirus.

The team also noted that hundreds of others health workers have died as a result of the pandemic, including 445 nurses, 42 pharmacists, 223 midwives and 25 laboratory workers.

Health minister Budi Gunadi Sadikin says the government has started to use a batch of Moderna vaccines as booster shots to health workers who already received China's Sinovac vaccine.

Sinovac is one of seven coronavirus vaccines that have received emergency use approval by the World Health Organization. Studies on the vaccine’s efficacy rate are ongoing, but Sinovac appears to be less powerful against the coronavirus than other COVID-19 vaccines.

Meanwhile, in the past week the number of daily infections among Indonesians has increased to more than five thousand, with more than a thousand new deaths.

Indonesia currently has more than 2.8 million confirmed cases and 72,000 deaths, according to the Johns Hopkins University, which is tracking the global outbreak. Indonesia is the world’s fourth most populous country, with more than 275 million people.

Windhu Purnomo is an epidemiologist who serves on the faculty of public health at Airlangga University. He told VOA that the situation might worsen due to three factors: the slow pace of vaccinations, the failure to curb people's mobility and the spread of the more virulent delta variant.

“We have just got many new vaccines like from the US, Japan, etc., so even if we increase the vaccinations program, it is still not optimal,” Purnomo said.

The country can’t impose a lockdown as has happened in other nations, because it doesn’t have the money to pay people to stay home. And the delta variant, which is sweeping the world, is hitting Indonesia hard as well.

“Our burden is too heavy,” he added.

The government imposed strict curbs on movements on July 3 to slow the spread of COVID-19. They include a work-from-home order for non-essential workers and the closure of shopping malls, markets, and all public facilities on the islands of Java, Bali, and 15 other cities across the archipelago.

Luhut Pandjaitan, senior minister who coordinates pandemic restrictions, told VOA on Friday that the government will decide within days whether to extend the timeline for lifting the restrictions, which are set to end on July 20.

“It is not easy and there are several other options. But we will most likely extend it because it’s impossible to reduce or control the spread of the delta variant in two weeks, he said. “But we'll see what happens first.”

Health facilities may break down, the mitigation team warned, because there may be too many people needing care, limited medicine and medical equipment available and a lack of doctors, nurses and other medical staff available to provide care.

“We are worried about the potential of a functional collapse. We must create a mapping to see the capabilities of each local health facility,” said Adib Khumaidi, another leader on the team.

The government says it plans to speed up the opening of a number of field hospitals, as well as mobilize 2,000 doctors and 20,000 nurses to cope with the surge in cases.