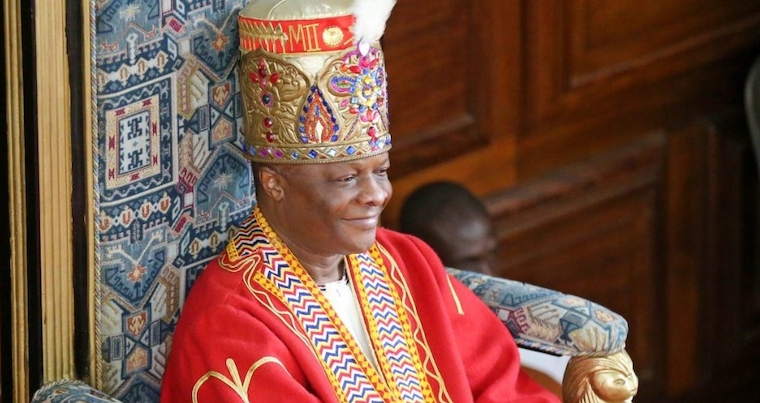 The Kabaka of Buganda, Ronald Muwenda Mutebi II has appealed to the Muslim faithful this Eid al-Adha to pray for God's mercy against all those with ill intentions targeting kingdom property.

He made the appeal in his message to all Muslims who start their 3-day Eid al-Adha festival starting today Tuesday. Eid al-Adha also referred to as the festival of sacrifice is one of the most important festivals on the Muslim calendar and is used to commemorate Prophet Ibrahim's willingness to sacrifice his son when God ordered him to. Muslims mark the day by sacrificing animals and sharing the meat between family, neighbours and the vulnerable.

“We appeal to all believers participating in this animal sacrifice to do it with a purpose of beseeching God to save us, have mercy on us, and continue blocking all paths and voices targeting our properties, especially ownership of land in a move to undermine and create hatred for Buganda in various ways,” reads part of Kabaka’s message.

Mutebi also encouraged believers to pray for the 11th parliament to legislate on matters that concern the entire country rather than issues regarding a particular region, faith, or political ideology. He says that this forms the basis for the development of Uganda and its people.

“In the same manner, continue praying to Allah for justice and speedy investigations in regard to cases against nationals suspected to be on the wrong side of the law. This will help courts of law to determine cases in time, apprehend wrongdoers and release the innocent. And the courts should also exercise independence in determining cases based on evidence, law and truth,” further reads the statement.

Early this year, the government through the ministry of Lands, Housing and Urban Development unveiled proposals of new regulations and laws on ownership and management of land, especially in the central Buganda region. The then minister of Lands, Beti Kamya said that these were intended to protect bibanja holders and bonafide occupants from being arbitrarily evicted.

Museveni said that this needs to be reformed so that landowners are entitled to full ownership of their land, noting that he was perturbed by concerns of people who are illegally displaced from their land induced by land grabbing cases related to the mailo land tenure system.

However, the katikkiro of Buganda Charles Peter Mayiga recently warned the government against interpreting the country’s land issues in political terms.

“The truth is that it’s not the mailo land system that is causing the problem because we have witnessed development in Uganda since the mailo land system was introduced. Land problems started around the 1990s and 2000s and if they are addressed, there should be no problem at all,” said Mayiga in part.

Mayiga also warned against any enactment of controversial laws on mailo law saying that even when enacted, they would be changed in the future.

Some of the issues recently identified by the kingdom that need to be addressed by government regarding land are; apprehending those who evict people using guns, streamlining all land offices in the country to ensure that rightful people get certificates of title, strengthening and providing financial and logistical support to the land protection unit of Uganda Police, timely disposal of all land cases in the courts of law and others.

“We continue to pray and sympathize with the sick and all those who seem to have lost hope due to the situation occasioned by the coronavirus," he said. "We appreciate government for all it has done to save our people in various ways. We encourage you to get vaccinated and continue to protect yourselves as well as follow directives by health workers," said the Kabaka.

Uganda has since March 2020 registered 90,656 cases of Covid-19 and out of these, 68,241 people have recovered. Statistics from the ministry of Health also indicates that by 17th July 2021, a total of 2,392 people had died while 939 are admitted in health facilities across the country

12
0 #11 kabayekka 2021-07-21 14:32
It is unfortunate that African peoples who defecate in the bush all the time have the audacity afterwards to start to blame to go to hell, those nasty people who infect the clean drinking waters of the village well! Stupid is it not?

Look at it this way with the recent female Speaker of Parliament. She said;"M7 by now should be in his home town of Rwakitura retired."

"It is because of my power in Parliament that he is still around and kicking as a long serving President of Uganda!"
Report to administrator
12