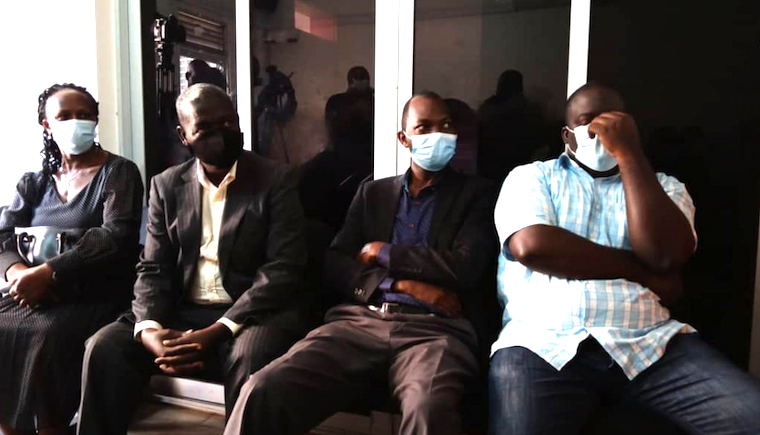 The four suspects at Anti-corruption court

The Anti-Corruption court has charged four officials from the ministry of Education and Sports with conspiring to solicit a bribe of Shs 228 million from a contractor.

They appeared today Wednesday before the Anti-Corruption court Grade One magistrate Moses Nabende who charged them with five counts related to corruption, abuse of office, and conspiracy to defraud.

According to the prosecution, the suspects between August 2019 and March 2020 using their respective offices conspired to defraud Robert Nsimbe Zizinga, the owner of Synergy Enterprises Limited who had been contracted to construct structures at Nyamitanga Vocational Technical Institute in Mbarara city.

The officials allegedly demanded 10 per cent of the contract price which was worth Shs 2.28 billion to facilitate awarding of the contract to Zizinga’s company. Evidence before the court shows that the prime suspect Lubinga first solicited a bribe of Shs 50 million for which he received Shs 25 million.

Evidence also shows that on her part, Lwanga who had been appointed as the contract manager of the Uganda Skills Development Project Bushenyi cluster, irregularly issued variant contract terms and specifications to the contractor without following the Public Procurement and Disposal of Public Assets (PPDA) laws and contract management thereby, frustrating and stalling construction works at the institute.

It is alleged that the suspects started making changes in the project designs to pressurize the contractor to pay them the balance of their Shs 228 million bribe demand which made the design changes costly and eventually stalled the works.

The suspects denied the charges and through their lawyers led by Richard Rugambwa, asked to be released on bail on grounds that the charges were bailable. The lawyers also told the court that the accused have substantial sureties.

Lwanga presented engineers John Kaweesa and James Kisitu who are the directors of Gali Technical Services Limited and Semajja Associates Limited respectively as her sureties.

Hajji Nsubuga presented his brothers Ismail Nsubuga and former employee of Kenya Airways and businessman Godfrey Mabirizi Ssetimba as his sureties while Lubinga presented Florence Nabukera, his wife and his spiritual leader Ivan Wood, a pastor at Jesus My Rest Ministries as his sureties.

State attorney Harriet Ongom told court that the Director of Public Prosecutions (DPP) guided that prosecutors should not object to bail during the lockdown unless in exceptional cases.

They were granted bail, but Ongom objected to the request that the suspects be released on non-cash terms. She noted that the amounts of money involved are huge, they should therefore be asked to pay cash.

Nabende concurred with Ongom and ordered Lubinga to pay Shs 4 million cash, Lwanga Shs 2 million and the other two suspects Shs 1.5 million each. He has also directed their sureties to execute a non-cash bond of Shs 50 million.

+1 #1 Loveuganda 2021-06-23 23:17
Corruption everywhere one turns. From president's office to gatekeeper at the hospital or morgue when one loses a dear one.

Whom should Ugandans turn too if even during this pandemic, medical facilities and their counterparts are exortjng sums if money from vunerable people?

How come the health ministry has not come out to talk about it or regulate the fees. What should we Ugandans do?
Report to administrator
0 #2 Josh 2021-06-24 00:19
This country is full such people and only the unlucky get noticed.

If you didnt know, its a standard for giving 10% of the contract price as kick back for every contract.

These public officials betray their country and people they swore to serve honesty. The cancer of corruption in Uganda and sub-Saharan Africa in general, must be conquered, otherwise the future will continue to be bleak for years to come.

Other serious regions of the world, have now made gigantic economic strides leaving Africa way behind.
Report to administrator
+4 #5 Lysol 2021-06-24 04:16
The buck stops with Museveni.
Report to administrator
-1 #6 Nseka Mali 2021-06-24 06:29
Forget about the legality of bail provision, so a pastor can stand surety for an embezzler or a thief such as the one above???

Black Africa can really ashame!!! Would such a pastor preach against theft / corruption if court determines that the thief actually committed the crime???

Oh no !! Ms Nakalema, bite those thugs hard they've shamed Uganda s enough!! Soon you should crach the whip in churches that are owned by individuals...
Report to administrator
+2 #7 Tabula 2021-06-24 15:51
Quoting kasede:

Yes that's why they are being outed
Otherwise those who take Billions from other areas are never discussed in public But in whispers,.
Gavi fund, Junk Helicopters, BOU staffed black bags, just to mention a few.
Report to administrator
0 #8 rubangakene 2021-06-24 18:36
"Fisi akiwa Hakimu, mbuzi hana haki." If hyena is the judge all goats are guilty, so to speak. This is the situation we got here.
Report to administrator