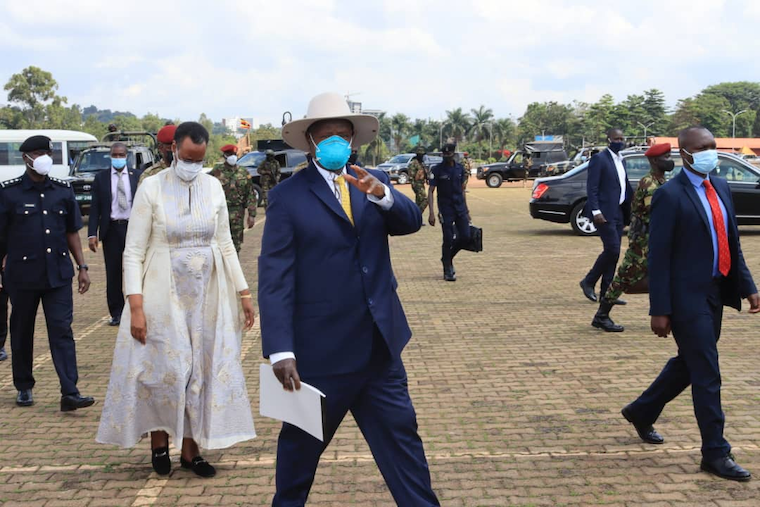 President Yoweri Kaguta Museveni has tasked his new cabinet with five targets to focus on in the next five years.

These according to Museveni are; cohesion, a corruption-free Uganda, integration, patriotism, and service delivery. Museveni laid down the five targets in his speech to the ministers who took oath on Monday at the Kololo Independence Grounds.

Others include; Hajati Misa Kabanda, the minister for Kampala Capital and Metropolitan Affairs, Justine Kasule Lumumba, the minister in the Office of the Prime Minister in charge of general duties, Thomas Tayebwa the government chief whip, Frank Tumwebaze the minister of Agriculture, Animal and Fisheries among others.

"This is a cabinet of cohesion in the system. I want the program of National Resistance Movement to be implemented enthusiastically. It must be a cabinet of no corruption. You people should be careful. There is nothing I don’t know. I appeal to the ministers not to ask for anything from anybody. If you want to be durable leaders, don’t seek and accept favour from anybody. And don’t tolerate corruption under you," warned Museveni.

He said that the cabinet must resolve the issue of market for products in the EAC region. The president also tasked the new cabinet to be patriotic and be a team that shows concern.

Museveni noted that there is no need for one to go into public office if they don't have a public spirit. He said that parasites should be out of public service. Museveni hinted that he dropped some ministers who were previously in cabinet because they lacked the spirit to serve the public.

"Nobody should be in the public if you don't have a public spirit and if you're the supervisor, me I can't tolerate anybody under me once I detect that - out you go. Because if I tolerate you, I'm endangering the system. So patriotism, patriotism. How does somebody allow the only policeman who has got a skill which you know is very important why not multiply it by training. But if you have one, how can you allow the only one who has got that skill to retire. Can you imagine? The one who knew this retired; who allowed him to retire? Therefore we don't want parasites in the public service we don't want parasites. Parasites are people, things who take from the body but add nothing," Museveni added.

The president also said that the new government must be a government of service delivery in areas of education, health and roads.

"I don’t want to hear outcries anymore. The issue of justice, land evictions. This cabinet must look at those five targets. I congratulate all of you on being sworn in today and I congratulate all the people of Uganda for having successfully held elections in spite of the coronavirus and other challenges. Now we have got a parliament and cabinet. So we are set now. This ceremony is part of the Constitution and we shall have our first cabinet meeting next Monday in Entebbe," said Museveni.

He noted that in the last 35 years, a lot of growth has been achieved in terms of education, agriculture, life expectancy, reduced infant mortality, infrastructure and others. Museveni noted the cabinet should now resolve on having all Ugandan work for the stomach and money as well.

"39 per cent of homesteads are still in the non-money economy, meaning that 61 per cent of the economy are in the money economy. This cabinet must now resolve that all people work for the stomach and money as well," he said.

The president noted that some of the achievements reached in the past have been maintained in spite of the opposition from political actors and also civil servants.

"We have been opposed in parliament, opposition of civil servants…it has been a struggle. Many of these achievements, were our innovations in spite of the opposition. Also, corruption has been a problem," he noted.

Museveni says that if it wasn't for the opposition, NRM would have achieved more in the past.

"I have problems in parliament, I get opposition; lobbying, talking, calling committees, boiling tea and coffee as if I'm asking people to weed my garden. Then also opposition from the civil servants, it has been a struggle, it has been a struggle because if you audit all these achievements many of them were our innovations in spite of the opposition by the different groups which you can name 1,2,3. Who brought up the milk sector? You tell me, who brought the milk sector? Was it the ministry of Agriculture? Not at all, it was us. What about maize when maize became a cash crop, the only person who helped me with maize was [Victoria] Ssekitoleko the former minister of Agriculture. The fruits, the what all these efforts that we make are by us but facing opposition from the political actors but also from the civil service." Museveni said.

Deborah Katuramu, the deputy head of Public Service and deputy secretary to cabinet who oversaw the swearing in of the ministers said that the process is very important for cabinet to formally start government business.

0 #1 Kalibbala 2021-06-22 20:45
Museveni says that if it wasn't for the opposition, NRM would have achieved more in the past...Notorious Robbers Movement waged a War against Ugandans , Killed 1.000.000 People in Luwero Stole all their land and Property and still blames the same Opposition in names of Besigye Kifeefe with his FDC playing Comedy for the International Community that There is Parliament in Uganda!!

Soldiers have orders to Shoot and Kill People like it did on 18/19 of November..where 280 Persons Lost their Lives!!UGANDA IS TODAY A FAILED STATE! No police, Nothing works apart from Directives From State House Where The Corrupt Dine and Swine!

You will NEVER Succeed in Eliminating Baganda!
We will Reproduce and NO MORE MUVANDIMWE will EVER DARE TO KILL US AGAIN!! ..Ask the JEWS WHO SURVIVED HITLER..
Report to administrator
+1 #2 Lysol 2021-06-22 21:26
Museveni has no moral authority to lecture Ugandans on corruption. He has kept himself in power through corruption, something he has done from day one from his bush war.

Why does he keeps on recycling the same old corrupt fat ugly faces in his cabinet?

The old man is senile and he does not know whatever the hell he talks about. Uganda deserves better than what we have right now.
Report to administrator