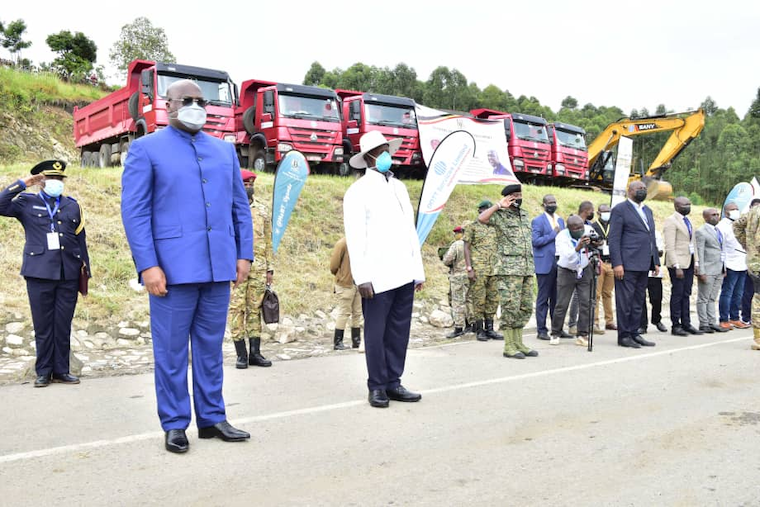 Museveni and Tshisekedi at Mpondwe

Uganda President Yoweri Kaguta Museveni and his Democratic Republic of Congo counterpart today Wednesday Felix Antoine Tshisekedi Tshilombo commissioned the construction of the cumulative 233km road project between the two countries at Mpondwe in Kasese district in western Uganda, through the minister for Works and Transport will be injecting up to Shs 243.7 billion into the Congo roads project. Below is the joint communique released by the two presidents.

At the invitation of His Excellency Yoweri Kaguta Museveni, President of the Republic of Uganda, His Excellency Felix Antoine Tshisekedi Tshilombo, President of the Democratic Republic of Congo led a delegation comprised of H.E. Alexis Gisaro Muvunyi, Senior Minister of Infrastructure and Public Works and Lt. Gen. Ndima Kongba Constant, Governor of North Kivu Province as well as other Senior Government Officials to the Ground- Breaking Ceremony of the road infrastructure at Mpondwe in Kasese District in the Republic of Uganda and Kasindi in North Kivu Province in the Democratic Republic of Congo.

The two Heads of State exchanged views on bilateral, regional and international issues of mutual interest. They reiterated their commitment to promoting trade, investment and common infrastructure as well as deepening integration among the peoples of the African continent.

They stressed the importance of strengthening cooperation in different sectors including; security, infrastructure connectivity, energy, trade and investment, health, management of transboundary water resources, petroleum and minerals with the view to promoting peace, stability and prosperity of the two countries.

The Heads of State recalled the State Visit to Uganda by His Excellency Felix Antoine Tshisekedi Tshilombo, President of the Democratic Republic of Congo which took place from 9-10 November 2019 and welcomed the progress made in the implementation of the decisions agreed upon during the Visit.

The two Heads of State applauded the signing of the Inter- Governmental Agreement (IGA) and the Project Development Agreement (PDA) concerning the joint implementation of the road infrastructure project covering the Mpondwe/Kasindi-Beni Road (80 kilometers); the Bunagana-Rutshuru-Goma Road (89 kilometers); and the Beni-Butembo Axis (54 kilometers) on the territory of the Democratic Republic of Congo on 27th May 2021 at State House, Entebbe.

In a Ground- Breaking Event, the Heads of State commissioned the construction of the road infrastructure between Uganda and the Democratic Republic of Congo and underlined that this historical event, will cause a tremendous change in the socio-economic transformation of lives of the two peoples. They directed the Contractor to execute the construction works in a timely manner. 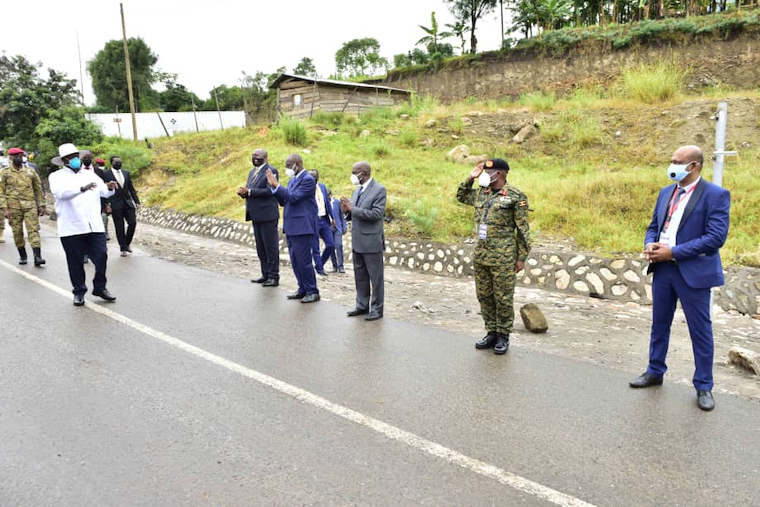 They directed that preparations for the construction of the Nebbi- Goli- Mahagi-Bunia road (190 kilometers), Bunia- Bogoro- Kasenyi road (55 Kilometers) and Rwebisengo-Budiba-Buguma-Njiyapanda road including the Budiba Bridge across River Semuliki (49 Kilometers) be undertaken as soon as possible.

The two Heads of State exchanged views on the security situation in the region especially in the Eastern DRC and stressed the need to maintain peace, security and stability in the region. In this regard, they reaffirmed their willingness to combine their efforts to neutralize negative armed groups destabilizing the region.

His Excellency Yoweri Kaguta Museveni expressed gratitude to His Excellency, Felix Antoine Tshisekedi Tshilombo, President of the Democratic Republic of Congo and his accompanying delegation for honouring the invitation to the Ground - Breaking Ceremony for the commencement of the construction works.

DONE at MPONDWE/KASINDI this 16th day of June 2021

He is usually wearing N95 mask while health care workers fighting covid-19 in the hospitals cannot be guaranteed functional masks and PPE. Really shameful!
Report to administrator
+1 #2 Lakwena 2021-06-17 12:24
In other words, this so call commissioning of such a self-interest based (fighting for self and family [Dot Service]) Road-construction, should remind Ugandans of what happened to the 2012 Commissioning of the Standard Gauge Railway (SGR) at Speke Resort Hotel in Munyonyo.

It was a despicable scene where Gen Paul Kagame, Salva Kiir and Gen Tibuhaburwa cut a tape over a contraption of a disused Uganda Railway 1-meter line and slippers, which were ferried from the Old Port Bell- Kampala Line.

No wonder, since then Gen Kagame wrote off Gen Tibuhabrwa as an embarrassing joker: Someone you work with at your own risk and peril.
Report to administrator
+1 #3 MR 2021-06-17 12:24
What happened with the railway project from Mombasa to Kampala?

Wonder who they are planning on borrowing the funds for this over priced project from
Report to administrator
0 #4 kabayekka 2021-06-17 15:02
Unfortunately for Uganda, the cost of removing the long serving dictatorship of Mobutu, then Uganda putting up efforts to neutralize negative armed groups destabilizing the region and now building up the roadways of the Eastern Congo seem to be making Uganda a very poor country.

There is the question of war reparation for Uganda to pay the Republic of the Congo over 20 billion dollars.

Former President Mobutu should have built these infrastructures as there was enough money in a very big African country(905,568 squire miles) with only a population of only about 8 million Congolese citizens.
Report to administrator
+1 #5 kabayekka 2021-06-17 15:21
Indeed Uganda is suffering economically as it interferes into the internal affairs of the Congo, because of that bad political habit most African leaders have got of staying put in power for all their lives.

There by making the countries they lead as their personal place of ownership. And when they leave power, all that they have put up goes into ruin. President Tshisekedi knows all this bad politics when he was suffering in such governance on the opposition side!
Report to administrator
+2 #6 Loveuganda 2021-06-17 16:46
Wrong prorities. Instead of focusing on the pandemic he is commissioning the road?

I thought Covid-19 would be on top the agenda. People are dying, cannot afford oxygen, no vaccines even the masks which were supposed to be distributed were not enough, he is commissioning roads.

He told people to not cross districts did all those who went fly with him? Why not commission toilets too? Gasiya.
Report to administrator
+4 #7 Kalibbala 2021-06-17 17:46
The Curse, Kisiraani and Enemy of Humanity is running away from pressure at Home and trying to embrace Bubble contracts with Chinese who are bent on Retrieving Resources from Congo via Kampala!!Covid 19 Money Stolen by Relatives, The SGR Project remained a Pipe Dream like All others Leaving a Struggling FAILED STATE Killing and Maiming its Folks!!..Directives to Register every Dead patient as Covid Death!!

You don't build roads and they live hapily ever after, they have a life span and while in use, they are expensive to maintain.

Has anyone of you readers, ever used the road to Kitezi, where the city dumps most of its garbage? A very short length of a road, a very important piece of the road system of the mother city, we cannot maintain it and we want to "send man to the moon"
Report to administrator