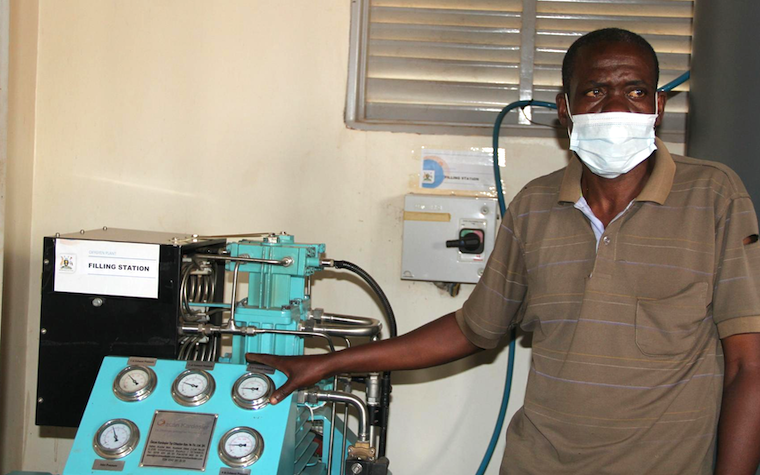 Mbale hospital is now getting oxygen refills from Jinja hospital

The oxygen plant at Mbale Regional Referral hospital has broken down after being overstretched to function beyond capacity.

The breakdown of the plant has now induced panic at the hospital since almost all COVID-19 patients admitted are dependent on and in need of oxygen.

Dr Emanuel Tugaineyo, the director of Mbale hospital, says that the oxygen plant broke down yesterday Tuesday after being overstretched. The plant was working beyond its normal capacity because of the increase in the number of COVID-19 cases.

According to Tugaineyo, on a normal day, the plant refills 25 oxygen cylinders but due to the current high demand, they are now forced to refill over 40 cylinders. He explains that when the plant broke down, the hospital management notified the ministry of Health and referred some of the patients in need of oxygen to Jinja hospital.

He says that the ministry has now provided some oxygen cylinders, which they are using at the hospital as technicians fix the oxygen plant.

"Definitely it is overstretched, it is overworked, we're pushing it to work beyond its capacity. Because on a normal working which is also not ample, it can only deliver 25 oxygen cylinders in 24 hours. Those are not now enough for our needs as a hospital and yet we supply even the other lower units in the region. They also come here for oxygen. Of course, we have been pushing it beyond capacity. That could have resulted in the breakdown," Tugaineyo said.

Mbale hospital has since the outbreak of COVID-19 pandemic registered 616 cases. Currently, 33 patients are undergoing treatment within the treatment center with 12 of them on oxygen. Ugandan hospitals are faced with oxygen shortage following a breakdown of the main refilling plant at Mulago hospital last week.

"The situation is very worrying, the situation is very bad because now the virus is easily transmissible and then the patients are presenting with more severe symptoms than in the first wave. Just a small disruption, you can get disaster because almost everybody who comes needs oxygen but in the past, we would get so many and few would need oxygen," Tugaineyo added.

And this may be just the beginning of mass infections all over the country. Very uncertain times lie ahead.
Report to administrator
+1 #2 kabayekka 2021-06-17 16:16
No wonder most citizens in the country are very fearful of the management of the hospitals in this country.

Especially as COVID19 is hitting the country hard. The public for a very long time have been watching the situation as parliament has been playing about with the budgets of the health service.

The medical staff on the front line of treating this pandemic have been lied on many times over their wages and the dangerous conditions they are working in.

These medicals are also people who do not want to get infected and die. They too have their families. And they are certainly taking lots of risks as they struggle to treat the sick!
Report to administrator
+1 #3 kabayekka 2021-06-17 16:25
The URA is completely silent and yet this is the institution that has been overtaxing the medical equipment that have been coming into the country.

No wonder such companies would have done better with their machines to produce as much oxygen as possible.

They would be having some sort of a plan B in their industrial production plans. URA the way it looks at such attitudes is avoidance of tax payment.
Report to administrator
+1 #4 kabayekka 2021-06-17 16:31
Most tax payers would rather be paying tax on the various medical equipment coming into the country to treat the sick.

Other than to be told to pay tax revenue that is going to grease the wages of the new 600 members of parliament and 85 cabinet ministers.
Report to administrator