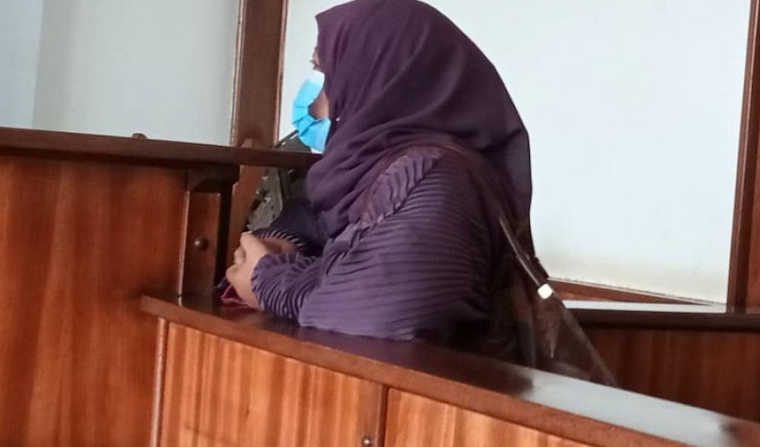 Huda Elradi Ali was on Tuesday fined by the Buganda Road Grade One magistrate Gladys Kamasanyu after being found guilty of two offenses of false declaration and giving false information to the passport officer at the ministry of Internal Affairs in Kampala on May 24, 2021.

According to prosecution, in 2018 Huda presented herself as a Nubian by tribe for purposes of acquiring a Ugandan passport while using a national ID for Ugandans whereas not. Huda was arrested when she went back to the passport office to follow up on the passport. The law provides that one can either be a Ugandan by birth, citizenship, or by registration.

In court, Huda pleaded guilty to the charges and was accordingly convicted. The prosecution asked court for a deterrent sentence, saying that the cases of foreigners coming to Uganda to acquire identity documents illegally are rampant.

Huda was remorseful and told court that she had not acquired the ID for illegal purposes, but because she never wanted to return to her country since she has relatives in Kampala.

When the magistrate asked her why she had obtained the card, Huda noted that she had been told that a Ugandan identification card can easily be acquired by foreigners. Kamasanyu chose to sentence Huda to a fine of Shs 1.5 million and with an alternative that failure to do so, she will be jailed for one year.

"You were remorseful but such offenses have been rampant. Many foreigners go to the national identification cards office to get them. But it’s wrong. It has to stop. Only Ugandans have to get them. Many people get our national IDs to do wrong things and what you did was also wrong," said Kamasanyu.

-6 #1 Makanga 2021-06-16 21:30
Strip that negro off Buganda citizenship and deport it back to its wild country. We are tired of foreigners in the guise of refugees.
Report to administrator
+1 #2 Kalibbala 2021-06-17 17:53
#Makanda/Makende your name clings Congolese and You are The Majority of negros Roaming Kampala Streets Holding Ugandan passports! Time is bound to Come When the New
Immigration Knock on your Doors to have you Sent back where You Came From!!

We are tired of Sserwajja okwootas! Huda is Innocent it is only these Corrupt officials who Ate and never Delivered.
Report to administrator
0 #3 Mubiru 2021-06-17 20:07
For a foreigner convicted of forging papers and receive official documents by false pretence not to be deported immediately exposes the calibre and incompetence of Uganda's so called professional judicial system

That's the very cause of the abundance of unprecedented criminality when convicted non Ugandans are simply rewarded with fining them a mere 1.5m Uganda shilling and stay in the country to continue their "stock in trade" ie murders and robbery etc.

I respect those non criminal well educated and professional foreigners who contribute to the progress of our country but not parasites whose only aim is to destroy our people and economy in the name of "investors".

Unless the judicial system is fully sanitized and rid itself of bunches of snowflake inadequates who fine criminal s just peanuts Uganda is rapidly descending into a pit of permanent hell on earth. In other countries including hers she would be deported immediately
Report to administrator