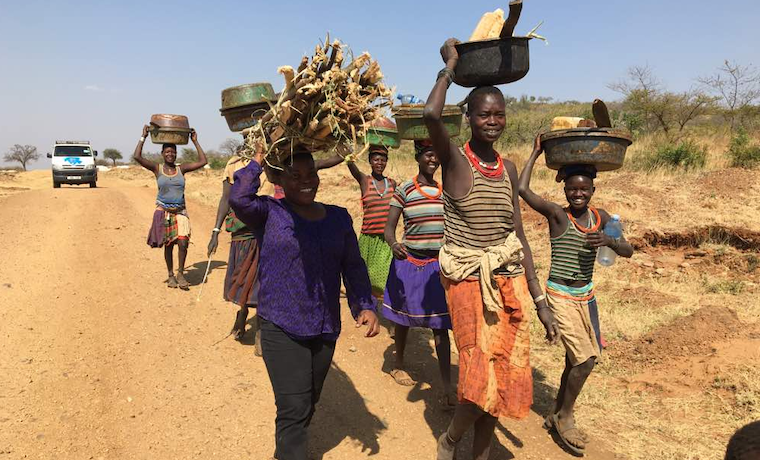 Agnes Nanduttu (L) in Karamoja as a journalist

The loudest complaints are over distribution of ministerial appointments. Fringe appointments handed to Karamoja and Bugisu politicians have added another layer of drama and dis- sent to the appointing authority.

The Karimojong say they are tired of tourist ministers appointed to superintend their region. The Bagisu, on the other hand, are disappointed at the small cabinet posts given to their sons and daughters yet they have voted overwhelmingly for President Museveni since 1996.

Last Friday, about 26 MPs from Karamoja sub-region said that despite the massive support President Museveni has enjoyed from their region since 1986, he has never appointed a single Karimojong in a key cabinet position. They have gotten slots of ministers of state.

The MPs said even when Karamoja got a ministry in charge of its affairs, the president elected to appoint non-Karimojong or in their own words “tourists” to be in charge.

“We have always been with ministers who are tourists. They fly in, fly out. Fly in, fly out. Yes... those are tourists. Now they have brought in other two tourists. Let them come and tour Karamoja by the time the five years are gone, they will not even have finished touring the whole region,” Pian MP Remigio Achia said.

The MPs, who spoke to journalists after electing leaders of their Karamoja Parliamentary Group, said despite getting three ministerial appointments, they had expected at least a cabinet minister and a Karimojong to be in charge of their regional affairs docket, not the tourists.

“I don’t know who advises the president. We have no problem with the new minister he appointed but the question is: how long will they take to learn the history, conflict, unique situations, who will they talk to? We have few well-placed people who can speak to elders, who have been initiated like Lokeris. These are the people who should talk to fellow elders,” Achia, now the group chairperson, said.

“We are not being sectarian as the president always says. We just want people who can mobilize the region to address the current situation. The day Karamoja becomes peaceful; they can bring in other people but at the moment, we are tired of translating. Yeah... we are tired,” Achia added.

Napak Woman MP Faith Nakut Loru said, “We are going to lose time. By the time someone learns (Karamoja politics), a new election is happening; so, government will take long to achieve the planned socio-economic transformation, and we return to what [former president Milton] Obote said that ‘we shall not wait for Karamoja to develop.’ The rest of Uganda will continue developing as we follow from behind,” Nakut said.

Kaabong Woman MP Christine Nakwang Tubbo and Bokora East MP Peterkhen Lochap argued that despite the several obstacles ahead due to a language barrier, there was not much to alter.

“Karamoja has many challenges but as a team, we are willing to work with other people, the appointing authority did their job and we have little to add,” Nakwang said.

Dodoth West MP Ben Baatom Koryang said in Karamoja one cannot do much unless he has been initiated.

“As elected leaders from the region, we have the mandate of the people but there are things beyond that mandate. That is around culture, which we cannot do,” Baatom said.

The MPs said although it will go down in history that for the first time, women from Karamoja have been appointed ministers; the drawback is that the sub-region has never had a cabinet minister.

“For God’s sake, since Obote time, we have never had a cabinet minister. It doesn’t matter how we vote. We have been voting 90%, 100%, 100%... president says you should show cause why we should appoint you. We have shown cause by voting, maybe our votes are few,” Achia said.

The MPs argued that even if their votes were few, they gave them with commitment and dedication and also expected some political reward. In June 2016, Karamoja leaders pro- tested the failure by President Museveni to appoint a single Karimojong as a full cabinet minister in addition to transferring his powerful wife-minister from the Karamoja docket to Education and Sports.

The leaders argued that they were only reflecting wider displeasure felt by district chairpersons, religious leaders, and student leaders.

They threatened to formally write to the president to protest what they termed as ‘neglect’ of Karamoja. In 2016, the president appointed John Byabagambi (from Ibanda, Ankole) and Moses Kizige (from Kamuli, Busoga) as minister and state minister for Karamoja Affairs respectively.

He maintained Peter Lokeris (Mineral development) and Simon Lokodo (Ethics and Integrity) the only Karimojong, but the MPs insisted the duo- had the qualification and experience to head ministries.

Interviewed then (2016), former senior presidential press secretary, Don Wanyama sought to deflect the accusations against the president, saying “the president does not appoint ministers on the basis of tribe”.

According to Wanyama, the ministerial appointees are made to help the president to serve national interests and, therefore, ministers are appointed to serve the whole country.

“For example, if one is appointed minister of Works, it does not mean he/she is going to fix roads from their region, district or area alone but the whole country,” Wanyama told us then.

Two MPs from Bugisu sub-region on the same day (Friday) vowed to diminish NRM support in their areas following their dissatisfaction with President Museveni’s ministerial appointments.

In his reshuffle last week, Museveni maintained Mary Goretti Kitutu- Kimono in cabinet adding Agnes Nandutu and Dominic Gidudu-Mafwabi (state for Elderly) but the MPs insist Bugisu as a sub-region voted overwhelmingly for the president and deserved more ministerial appointments.

Elgon North MP Gerald Nangoli and Bulambuli MP Isaac Katenya argued that despite Bugisu voting massively for President Museveni, he has instead rewarded other regions that didn’t support him.

“If we voted you with 76.3%, how do you reward us with only Karamoja [ministerial jobs] where they don’t even have a budget or permanent secretary. In Bulambuli,...we got nothing, even if they didn’t give us a slot, there are other senior MPs like [Irene Nafuna Muloni- former Energy minister and Ignatius Wamakuyu-Mudimi- Elgon MP]. In Sironko, they gave Gidudu who we don’t count because he is an MP for the elderly for the whole eastern region,” Nangoli said.

“Our people in [Bugisu] are disgruntled, shedding tears and our people [Kimono and Nandutu] were dumped in Karamoja. We also wanted a ministry in Bugisu for Bugisu Affairs. Dumping our people in Karamoja, do you know what it means?...” Nangoli added.

Katenya said unless the president awards Bugisu especially Bulambuli with key employment positions in government departments, their support for the NRM government will dwindle.

“Most of the areas that didn’t vote for him [President Museveni] like Buganda, Busoga and Teso were awarded heavily. Since he sent our people to Karamoja, he should have appointed more persons in other ministries so that our people access services,” Katenya said.

The Karamajong MPs are right, why not pick somebody from among them, will he or she concentrate on only their constituencies and leave others lagging behind.

Sir, (1) a Minister does not have to be an elected MP with a Constituency. (2) I know many Akaramojong who are very highly educated and experinced in development work world-wide with the UN system, eg, Mr Richard Echodu [with UNICEF somewhere abroad].

My advice is this: The Akaramojong should constructively dialogue with M7 and bring a few of those back to develop Karamoja.
Report to administrator
0 #3 Loveuganda 2021-06-16 17:19
Appointments by regional dockets makes sense. M7 started it. Let him go back and ask parliament for other positions.

From gender. Religion, tribes. Sub-tribes, and the rest. Let every dick and Harry get a ministerial positions after all it's us the 1 million taxpayers who pay for their well-being. It will burst who cares. This is Uganda.
Report to administrator
0 #4 Benjamin Brink 2021-06-16 19:21
This is about "gravy", but those complaining have a point; politics is about rewarding your friends.

It's also true that some regions (especially Bugisu) have interests that keep fighting each other. You can't blame the President for not knowing whom to favor!
Report to administrator
0 #5 Henry koryang 2021-06-17 12:18
It's not all about which position the m7 gives karamoja,b it ethics, minerals, disaster,but the big question is when will a karamoja lead,and represent his or her people,is it all about voting for m7 and laugh at us,

Boss this time round we ar already wise and learnt,and u better bring some one to translate on behalf of your ministers,
Report to administrator