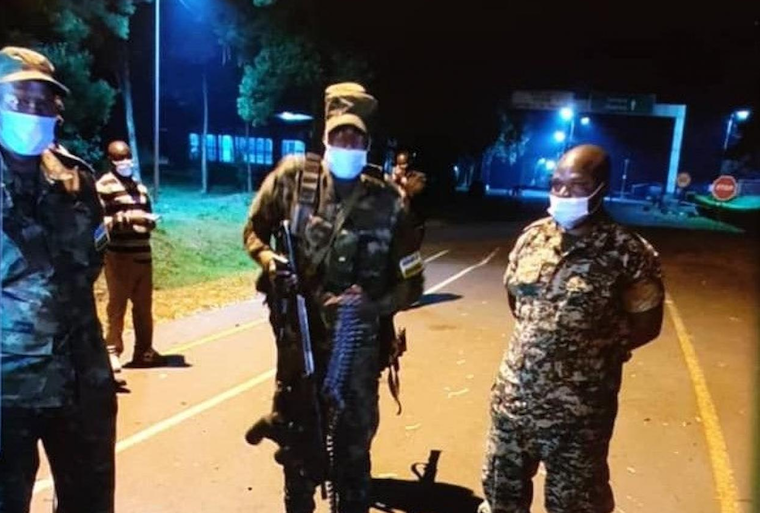 A Uganda People's Defence Forces (UPDF) soldier Pte Bakulu Muhuba has regained his freedom after being released by Rwandan security. Muhuba, who is attached to the 32nd Battalion Nyakabande in Kisoro district, was arrested by Rwanda Defense Force (RDF) soldiers at around 2:45 pm on Sunday while allegedly found loitering in Kamanyana-Majyambere village in Burera district, Rwanda.

RDF soldiers on patrol, intercepted Muhuba who was donning a UPDF uniform and carrying a Medium Machine Gun (MMG) with 100 rounds of ammunition, a pair of binoculars, a cell phone, and his military ID documents.

However, a Ugandan security official at Chanika border who preferred anonymity refuted Rwanda’s claims, saying that Muhuba was with a group of fellow UPDF soldiers patrolling the Ugandan side of Chanika border on Saturday evening around 5:50 pm but stayed behind to ease himself.

Captain Peter Mugisha, the Kisoro Resident District Commissioner, witnessed the repatriation and hailed RDF for releasing Muhuba unhurt. Such incidents are common along the Uganda-Rwanda border.

On May 25 this year, two RDF soldiers crossed to Kazaza and Mukayaga villages in the Kamwezi sub-county, Rukiga district. The soldiers, who included a captain and his two escorts crossed to Uganda in pursuit of waragi smugglers.

The soldiers returned to Rwanda without being arrested by Ugandan security authorities. The governments of Uganda and Rwanda have been feuding since 2019. On February 27, Rwandan President, Paul Kagame issued a travel advisory to his nationals against traveling to Uganda, saying their safety is not guaranteed.

He accused Ugandan authorities of abducting its citizens and locking them up in non-designated areas. Kagame also accused Uganda of hosting and facilitating dissidents especially from Rwanda National Congress (RNC) and the Democratic Forces for the Liberation of Rwanda (FDLR) which have declared war on the Kigali government.

The Rwandan authorities advised the truck drivers to use the Mirama Hill border in Ntungamo district. The border closure took a huge toll on truck drivers and suffocated business along the border especially Katuna and Chanika town. This led to an increase in smuggling along the border with most Rwandan nationals crossing to Uganda through porous border points to buy food.

Rwandan authorities, on accusations of smuggling, have shot dead at least eight people including Ugandan and Rwandan nationals. On July 30, 2019, President Museveni told journalists at Kabale State Lodge that they are discussing the impasse with his Rwandan counterpart.

However, to date, the negotiations mediated by the Angolan President, João Lourenço and his Democratic Republic of Congo counterpart, Félix Tshisekedi, are yet to bear positive results.

+3 #1 kabayekka 2021-06-14 13:21
As international law stands, Rwanda is playing up tyrannical politics together with his counter part in Uganda.

Both these leaders are so determined to stay put in power as a minority African tribe and would wish for many countries to go back to the days of political and civil turmoil in the East and Central African region!

For the country of Buganda, Rwanda needs to come to terms how they are going to compensate this country for the the historical war reparations that is well documented.
Report to administrator
+3 #2 David 2021-06-14 14:15
Given the fact that the border between Uganda and Rwanda is marked with mark-stones which i presume are dotted along the border line, it is easy for one to cross over into either's territory without obviously realizing that that they have crossed over.

We are so close that acrimony between us is unnecessary.

Given the fact that the border between Uganda and Rwanda is marked with mark-stones which i presume are dotted along the border line, it is easy for one to cross over into either's territory without obviously realizing that that they have crossed over.

We are so close that acrimony between us is unnecessary.

Otherwise, erecting a boundary wall such as some countries have done might save the day supposedly.

Solution: Let Rwanda be Rwanda and Uganda be Uganda NOW.
Report to administrator
0 #5 Nseka Mali 2021-06-16 00:01
So this armed man could not know that he was "easing himself" in a prohibited area of another country???

Build a cheap chain link fence for people to use cleared gazetted gates!!!
Report to administrator