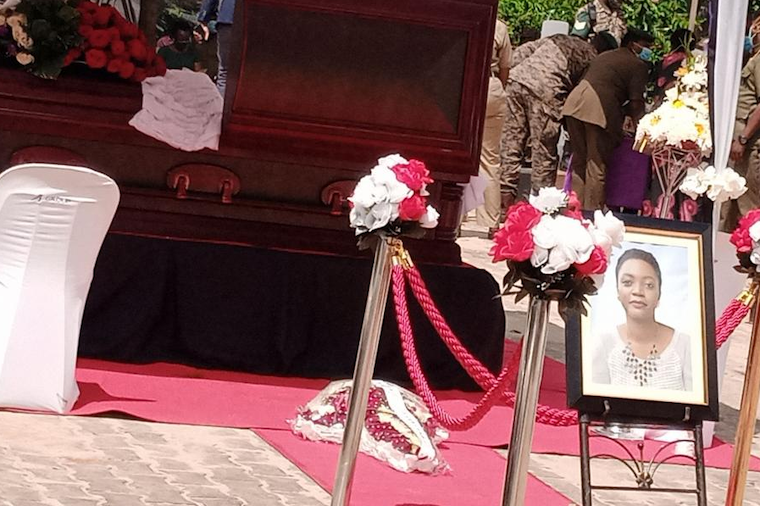 Brenda Wamala Nantongo, the daughter of Gen Katumba Wamala has been laid to rest at the family’s ancestral home in Kikandwa, Kasawo town council in Mukono district.

Nantongo was shot dead on Tuesday morning by unidentified gunmen who intercepted her father's vehicle, registration number H4DF 2138 along Kisota road in Kisaasi, and sprayed it with at least 56 bullets. Katumba’s driver Haruna Kayondo was also killed in the assassination attempt aimed at killing his boss.

Nantogo's burial was attended by several mourners who included religious leaders, former ministers, and security personnel. The deceased’s mother, Catherine Wamala told mourners that her daughter died at a time when she was looking forward to her wedding.

Catherine also asked the chief of defence forces (CDF) David Muhoozi to heighten Katumba’s security. At the time of the shooting, Katumba had only one guard who reportedly fought off the assailants and saved Katumba's life. On the day of the shooting, according to government spokesperson Ofwono Opondo, Katumba had sent away his other guards for another unspecified assignment. Earlier, he also reportedly rejected the government's lead car, arguing that it would be too expensive for government to maintain.

Katumba's sister Margret Kanyali noted that her brother’s attackers could have been jealous of his achievements and rise in the military. She said if it's Katumba's positions in government and army that the attackers want, they can take them in exchange for his life. Katumba previously served as police, CDF and is the outgoing minister of Works and Transport.

The Archbishop of the Church of Uganda Dr Samuel Kaziimba Mugalu who presided over the requiem mass and the Mufti of Uganda Sheik Shaban Ramathan Mubajje who represented the Inter-Religious Council of Uganda prayed for security forces and requested them to ensure justice to families of those that have been killed.

CDF Muhoozi assured the mourners that, unlike other high profile killings where investigations and reports have delayed, this time, the investigation into Katumba‘s shooting will be thorough and detailed about the incident will be released on time.

Katumba thanked the mourners and other Ugandans for showing love to the family. He says that he was overwhelmed by the sympathies he received and support following the incident. Earlier, Katumba said he couldn't point to any reason why he was attacked because he was a good person.

+3 #1 kabayekka 2021-06-04 02:44
The CDF is very wrong. The other relatives of the victims that have lost their lives all deserve VIP investigations and official reports as quickly as possible.

It is a very unfair world that most victims who are being attacked and killed in this country are very good people.

That is why in the Christian religion, one wonders why exactly did the religious people of Jerusalem kill the Godly Jesus on the cruel cross at Golgotha?
Report to administrator
+1 #2 Apollo 2021-06-04 10:39
I thought about this man this morning and the horrible reality he and his family is going through right now and prayed for them.

Nobody would wish to be in his shoes right now. He is dealing with the worst case scenario of a job hazard. He made his choices. He needs to pull out of this without losing his mind. That was my prayer.
Report to administrator
0 #3 Lakwena 2021-06-04 12:25
Unless she was being cynical, Madam Catherine Wamala should be reminded that the CDF is the wrong person to appeal to over beefing up Gen Wamala's security.

After such an unthinkable incident and many others (assassinations) before this one; it is foolhardy to trust this government with anybody's personal security.

Like e.g. how can anybody trust the president, Gen Tibuhaburwa who in broad-day-light told Ugandans that he knows who murdered Boxer Zebra.

In other words, our Problem of Africa, Author and Master of Violence, Gen Tibuhaburwa; knows who are behind the bullet riddled bodies of Afande: Kaweesi, Kirumira, Kiggundu, Abiriga; All Muslim Sheiks gunned down, Joan Kagezi; the nameless Women in Entebbe and Yasin Kawuma.
Report to administrator
+1 #4 Lakwena 2021-06-04 12:30
Quote:

The CDF is very wrong. The other relatives of the victims that have lost their lives all deserve VIP investigations and official reports as quickly as possible.

It is a very unfair world that most victims who are being attacked and killed in this country are very good people.

That is why in the Christian religion, one wonders why exactly did the religious people of Jerusalem kill the Godly Jesus on the cruel cross at Golgotha?

E.g. in the African traditional religious rituals, it is the most healthy and/or beautiful animals without blemish/deformity; that are often chosen for sacrifices.
Report to administrator
0 #5 Omuzira Ente 2021-06-04 15:35
King Nabukaduneza had alot of power that he ordered his subjects to worship him until GOD communicated to him through the little known shadrach Meshach and , Abednego .

This country has suffered but GOD will one day expose those killers who are protected by the state as he did after Amin and Obote.

The killing of inner people is historical in NRA from the 1st NRA commander late Seguya then Late Kaggwa until Elyy Tumwune one of theirs became army commander until the end of the NRA war.

The killing of Late Andrew Kayiira, Andrew Felix Kaweesa, Lt Kiggundu, Kirumira and Abiriga have a similar fashion and targeting a particular tribe. Like it was in UPC, Being popular in NRM ranks is enough to earn you a death certificate unless if you came from a certain tribe.

During Obote I night killings were very common until they eventually overthrow his government. NRM knew that it was no longer popular that is why the military took over the elections. The challenge is that they have blundered
Report to administrator
+2 #6 M!K! 2021-06-04 17:30
A society that fails to protect the many who are powerless eventually fails to protect the few who are mighty and powerful.

That is why the mourners should demand for the safety and security of all Ugandans regardless of their station in life.

Otherwise we are moving to a point where everybody in Uganda will need to have a lead car and a security convoy just to be able to breathe. Otherwise RIP Brenda and the already forgotten sergeant Kayondo. Quick recovery General Katumba Wamala.
Report to administrator
0 #7 Akao 2021-06-05 15:04
So what happened to the driver? Was he laid to rest too? Or that is not important to the public to know. RIP
Report to administrator