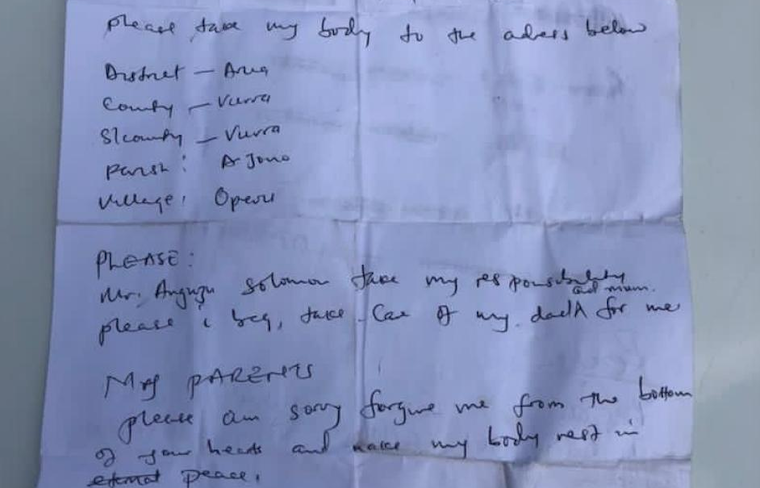 A 30-year old man has been saved from committing suicide by drowning in Lake Victoria.

Richard Tobo had in his suicide note written down elaborate plans for his post-death, giving clear instructions where his dead body was to be delivered in Arua in the extreme northwest of the country.

After writing the instructions for the dispatch of his mortal remains to his ancestral land, Tobo jumped off the deck of the MV Kalangala into Lake Victoria during the morning voyage from Kalangala to Nakiwogo yesterday Thursday.

Tobo took the unsuccessful jump at exactly 11 am, with just 30 minutes left for the MV Kalangala to dock at Nakiwogo pier in Entebbe. He did not give the reasons for taking his own life in his elaborate write-up which gave direction to his final resting place.

The write-up was safely tucked into in his travel bag, which he presumably expected would be inspected upon his death so as to ascertain his identity. In the write-up, he gave several contacts of his relatives in Arua city who knew where his ancestral burial grounds are located.

Tobo was rescued after the MV's crewmen who were joined by Nakiwogo fishermen dived after him and handed him over to Nakiwogo police.

he should have elaborate his reason of commiting suicide, i hope police teaches him with some sticks of caine after worsting peoples time by rescuring him.

This is a silly perspective. He needs counseling, not kicks.
Report to administrator
0 #3 Eric L 2021-05-14 17:15
Life is so challenging to many individuals. I pray he finds the right counsel otherwise many contemplate daily worse acts.
Report to administrator
0 #4 James Mukwaya 2021-05-15 19:05
Mental illness (even temporary) is real. In such cases, the man needs support and understanding.

Not condemnation or punishment. I hope he gets this support
Report to administrator
0 #5 Lakwena 2021-05-18 08:10
Am told suiciders are sadists. They kill themselves in order to punish others for not loving them.

E.g., hereabove, the people listed on his suicide note were to suffer the angst of transporting Tobo's body to his ancestral home.
Report to administrator