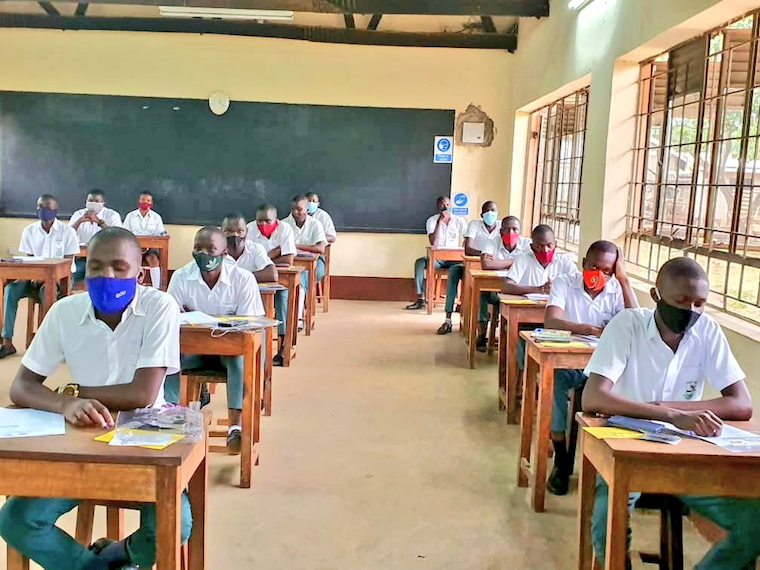 The Constitutional court has issued a permanent injunction restraining the Uganda National Examinations Board (Uneb) from conducting examinations on any day that coincided with any relevant Muslim religious holidays like Idd Adhua or Idd El Fitr.

According to the judgement of the five justices; Fredrick Egonda Ntende, Elizabeth Musoke, Cheborion Barishaki, Muzamiru Kibeedi and Irene Mulyagonja, if Uneb makes an examination timetable before ascertaining the exact date of any relevant Muslim religious holiday and the examination date falls on a religious holiday, that examination shall be postponed to a later date.

The judgement arises from a petition filed in 2013 by two Muslims; Sadiki Kakaire and Suleiman Isotah Magumba against Uneb and it's then chairperson Fagil Mandy. These through their lawyers led by Najib Mujuzi, told the court that the actions of Uneb to organize national examinations on days that coincide with Idd Adhua and Idd El Fitr Muslim religious holidays were inconsistent with a number of Constitutional articles.

They, for instance, named articles that provide for non-adoption of a state religion, fundamental and other human rights freedoms which are inherent, equality and freedom from discrimination, respect and protection from inhumane treatment, protection of freedom of conscience, expression, movement, religion, assembly and association.

Evidence submitted by the petitioners in court indicates that such actions of Uneb took place in 2003, 2004, 2005, 2006, 2012. They stated that even in 2013, Uneb had organized examinations on Idd Adhua day but they were reportedly forced to reschedule the examinations due to the pressure from the Muslim community.

Mandy was specifically sued for having insisted that the exams would go on in 2013 on Idd Adhua day despite it being declared a public holiday by the government. But during the case hearing, Uneb and Mandy who were being represented by principal state attorney Geoffrey Atwiine argued that the petition was raising allegations that concerned acts that did not occur in 2013 and may never occur again.

Court also heard that the petitioners never adduced evidence to show that there were examinations conducted on October 15,  2013, that coincided with Idd Adhua that year. According to Uneb, when they are making time tables, they don't consider any religious preferences but simply did so in exercise of their mandate under the law.

However, in their decision, justice Musoke who wrote the lead judgement explained that the way she understood the petitioners' case, was that the practice of Uneb when organizing examination time tables is that examinations can be conducted on the relevant Muslim religious holidays and such practice had never been abandoned and continues to date.

Musoke says that whereas she agrees with the respondents that there was no evidence pinning Uneb for conducting exams on Muslim religious holidays, that notwithstanding, in her view, the fact that no formal renunciation has been made by Uneb, means that its act of implementing such practices was done in the years stated by the petitioners, and is most likely to continue in future.

"In the year 2013, the first respondent/Uneb in fact amended the examination timetable and postponed examinations that had been scheduled to be conducted on relevant Muslim religious holiday to a later date. This strengthens my conviction that reasonable accommodation of the rights of Muslim students can be achieved through postponement as has been stated in this judgment," reads the judgment in part.

She added that in order to uphold the rights of students of the Muslim denomination to manifest their practice of religion through observance of Muslim religious holidays, there is reasonable accommodation that requires Uneb to refrain from organizing examinations to be carried out on the relevant days.

"I would therefore declare that the practice of the first respondent/Uneb in organizing for examination for students under its mandate to be written on days coinciding with any of the relevant Muslim religious holidays is inconsistent with and in contravention of the right to freedom of religion of Muslim students, in particular, the right to manifest their practice of religion through observance of the relevant Muslim religious holidays as guaranteed under the 1995 Constitution,” said Musoke.

Musoke also ordered that the petitioners be paid the costs of the petition. The decision comes at the time when Muslims across the globe are to celebrate their Eid Elftir on Thursday this week.

THAT WOULD EASE THE UNCERTANITY OF DECIDING WHICH DAYS IN THE CALEDER YEAR TO RESERVE FOR MOSLIM HOLIDAYS. [ Of course we know scientifically where the moon is at any time. ]
Report to administrator
-1 #2 WADADA rogers 2021-05-12 14:55
This nosense of Ugandans accepting to be ruled by norms of the white man and the Arabs needs to be stopped.

What is wrong with meeting one's obligations on such a day set aside i hear for religious rituals, its all bogus, total rubbish
Report to administrator