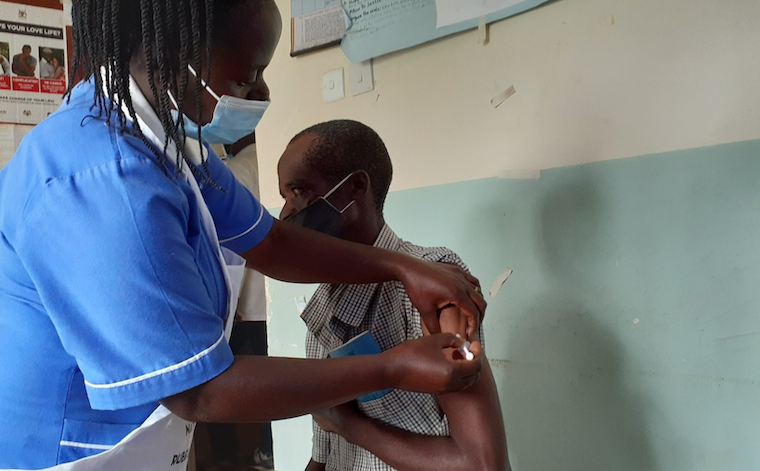 A. man getting vaccinated in Kabale

“When I take the Covid-19 vaccine, can I still be able to take my alcohol?” a one Laban Suruma asked the visiting ministry of Health officials and local area health workers in Butanda parish, Bufundi sub-county in the western district of Kabale.

Suruma was one of the about 30 locals who last week thronged Butanda health centre III to take the Covid-19 AstraZeneca vaccine. Given the approving murmurs from fellow locals when he asked this innocent but genuine question, it was only too clear what their most immediate concern was.

The vaccines only reached this hard-to-reach area about two weeks ago despite the fact that the vaccination process has been ongoing for more than eight weeks countrywide. To get to Butanda, it requires one to drive over 65kms, that is more than an hour around several hills from Kabale town.

The health officials told Suruma that he can still take alcohol even after the vaccination but should limit the quantity because with or without vaccination, too much alcohol in his body stream is unhealthy.

Meanwhile, Belleria Turabatema, another resident of Butanda, said she was confused by the conflicting information the area radio journalists were giving about the vaccination process.

She said she was ready to take the vaccine shot but different media and journalists in the area were giving conflicting reports, especially in regards to the after-effects such as blood clots and fever. She wondered if it is safe for people like her who are above 65 years to take the jab. In fact, she said Butanda is an area with so many elders above 100 years old but they cannot physically make it uphill. She asked if it was possible to take the vaccines closer to these people in their homes.

In February, Uganda received a donation of 864,000 dozes from the Covax facility and another 100,000 dozes from India. The vaccination process was officially rolled out on March 10 and the transportation of the vaccines across the country is being facilitated by Unicef.

But as of May 10, only 330,000 people have been vaccinated, according to ministry of Health statistics. According to Geoffrey Nkurunziza, the in-charge of Butanda health centre III, of the 500 dozes of Covid-19 vaccine that had been given to the facility about two weeks ago, only 92 people had been vaccinated – a low but impressive figure when compared to rest of the country where uptake has been low due to fears over safety.

Catherine Ntabadde, the Unicef communications specialist, said she was impressed by the turn-up of elders in Butanda to get the vaccines and their confidence to air out concerns regarding the vaccines.

Following the low uptake of the vaccine, the government has expanded the vaccination points to now include health centre IIIs, which tend to more people.

Initially, the vaccination had been limited to regional referral hospitals and health centre IVs. Transporting the temperature-sensitive vaccines, however, still remains a big challenge with majority of the health centres lacking the required storage facilities.

This means the vaccines have to be transported daily to the facilities and the unused back to regional or referral hospitals, which is costly.

Generally, the health workers themselves have not fully embraced the vaccination process and Ntabadde said they recently embarked on an online and onsite sensitization drive. This way, they train the health workers about how to administer the vaccine and the possible related challenges.

Similar transportation challenges were cited by Kabale assistant district health officer Oliver Namanya for Bwama health centre III in Ndora West, Kitumba sub-county. Namanya said Bwama is only accessible by boat and the two available government boats often have no fuel, something which affects movement of health workers and the medicines.

Ronald Ngabirano, the in-charge of Bwama health centre III, echoed similar transportation challenges saying even patients have to wait for the market boats, which only operate on Mondays and Fridays [the market days] and at specific times in the morning and evening. The facility, like all health centre IIIs, is only given about Shs 1.5m per quarter but Ngabirano says this is too little and should be upped to at least Shs 4m.