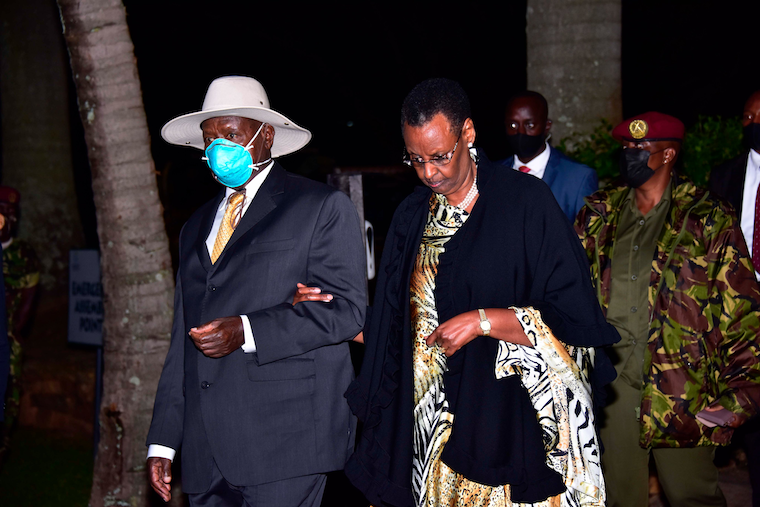 President Yoweri Museveni kicks off his sixth five-year term today, carrying the heavy burden of debt at a time when the economy is reeling from the effects of the coronavirus pandemic.

Museveni is already struggling to finance a large public expenditure bill, with the number of ministers and members of Parliament already at a record high.

Most of the promises that Museveni made, such as the construction of roads and other infrastructure, in his manifesto will not be met as the debt levels go up.

With debt levels now at 47 per cent of the gross domestic product, Uganda is within touching distance of the East African ceiling of 50 per cent – a level thought to be unsustainable and risky.

In monetary terms, the total public debt amounted to $15.27 billion at the end of June 2020, up from $12.55 billion a year earlier, according to the latest National Budget Framework Paper 2021, prepared by the ministry of Finance, Planning and Economic Development. The paper adds that the levels will reach 49.9 per cent of GDP by June 2021.

The IMF recently announced that it is holding discussions with the Uganda government for a financial bailout as growth remains down partly as a result of the coronavirus pandemic.

High and unsustainable debt levels usually constrain growth. It means that a lot of money from the national budget goes to pay off some debts first before the government can invest in priority areas. High debt levels also mean that financial institutions worry about lending money to the government, and those that do, peg a higher interest rate on the credit.

Ultimately, it means that the government borrows more money from the domestic banking system, crowding out the private sector in need of loans. In the end, interest rates in the market tend to shoot up if the country is heavily indebted.

Museveni, together with his Tanzanian counterpart, Hassan Samia Suluhu, oversaw the signing of three key agreements in April – the Host Agreement, the Shareholders Agreement and the Transport Tariff Agreement – in April.

For Museveni, it was a culmination of nervous negotiations with French oil major Total E&P, which saw the country make some critical tax concessions to ensure the country’s oil project moves ahead.

The production of oil is expected to be one of Museveni’s main economic legacies. Although, that legacy will not be complete if the oil refinery is not built. The three agreements signed in April were exclusively for the construction of a 1,443km underground heated crude oil pipeline – the longest in the world - from Hoima in western Uganda to the port of Tanga in southern Tanzania.

It is the refinery, however, that Museveni remains obsessed with. The refinery will ensure that Uganda becomes the only producer of refined petroleum products in East Africa, and a key supplier to the region.

The refinery, which will create other offshoot industries such as the petrochemicals, is a $4 billion investment, and Uganda, already short on funds, is expected to be a key financier.

President Museveni will make two key decisions on Uganda’s electricity industry over the next five years. Eskom Limited, the South African firm that has been operating and managing the Nalubaale and Kiira power stations, which have a combined energy output of 380MW – representing about 34 per cent of the country’s total energy production capacity – will end its 20-year concession in 2023.

Umeme Limited, the electricity distribution firm, which covers about 95 per cent of the country, also has its 20-year concession ending in 2025. Both Eskom and Umeme want the government to renew their concessions.

On the other hand, some people in government say that the country has built enough capacity to run the generation and distribution segments of the country.

The Uganda Electricity Generation Company Limited says that it has the capacity to run the Nalubaale and Kiira dams. Other people say that it is high time Umeme’s monopoly of the distribution segment is broken.

Museveni will find himself in a delicate situation on deciding which direction to take.

For Museveni, the critical issue is how to bring down power tariffs, especially for the industries to become competitive in the region. He will definitely commission the 600MW Karuma hydropower dam in 2022. This will be the biggest hydropower dam in Uganda and is expected to generate electricity at less than 5 US cents.

Museveni is expected to support the creation of free trade zones and industrial parks as he promotes the production of local materials. That support is likely to come through special benefits such as low power tariffs and tax breaks for industries that can demonstrate that they can create more employment opportunities and add value to raw materials.

Agriculture contributes about a quarter of Uganda’s gross domestic product. Considering that just over two thirds of the country’s population is engaged in agricultural activities, the sector is expected to contribute more revenue to the economy.

Agriculture faces one critical challenge: the lack of cheap and long term credit because of the risk attached to the sector.  Museveni, through the ministry of finance, has tried to engage commercial banks to lend to the agricultural sector but the impact has not been realized to the sector’s full potential.

Already, Museveni has embarked on building roads, with probably the ones keen to watch being the ones the country will construct in the Democratic Republic of Congo. Museveni says that these roads will help in easing the transportation of local goods into that country.

However, to cap it all, Museveni has a big task ahead in managing regional political relations if Uganda’s fragile economy is to avoid any unwanted hits. Rwanda’s border with Uganda remains closed over counter-accusations of espionage, meaning that some export companies such as those dealing in cement have lost revenue.

Kenya continues to play a ping-pong game with Uganda by instituting export bans in what some experts see as historical trade injustices of the past.

Sudan continues to show flashes of normalcy although traders continue to be attacked and killed. Museveni, the oldest leader in the region, has to a key role to play to ensure that Uganda’s economy does not suffer any more than it has over these issues.

+2 #1 kabayekka 2021-05-12 11:06
One reckons that living on borrowed time is a very normal outcome in these modern times. But then if one refuses to accept such indebtedness in life and try to correct it is very bad indeed.

You do not start to pay your debts by loading yourself with military hardware and start killing your fellow humans.

You will just be going mental! Well then those who have been making a very handsome habit of lending money anyhow should realize that they lend such great amounts of money at their own peril!
Report to administrator
+3 #2 Willy not Silly 2021-05-12 17:06
As we count and lament about Uganda's debt burden, let us take time and sum up the trillions of shillings that disappear every year unaccounted for under Museveni's classified budgets.

Uganda may turn out to be another Zaire of the 1980s where President Mobutu's personal wealth was bigger than his country's foreign debt.
Report to administrator
-3 #3 kambarage 2021-05-13 13:27
Quoting Willy not Silly:

As we count and lament about Uganda's debt burden, let us take time and sum up the trillions of shillings that disappear every year unaccounted for under Museveni's classified budgets.

Uganda may turn out to be another Zaire of the 1980s where President Mobutu's personal wealth was bigger than his country's foreign debt.

You wish. You guys are just negativists who see no good in any development not done by 'your own'. It is an understandable human trait.

Uganda is the least indebted among East African countries. No country is not indebted. This newsman is one of you confused semi-elites posturing as knowledgeable and unfortunately, with so much access to press which yo use to mislead the public into revolts and other time wasting ventures.
Report to administrator
+1 #4 wabomba 2021-05-14 08:36
Like in Idi Amin, the idiots as he called them will somehow block the loans and uganda will end up with loan sharks-the chinese-fellow readers, i would like to remind you that the oil in uganda was discovered in 1974 by Idi Amin but was advised that it would be anexpensive venture this was the advise of the likes of shell, total, esso, and other oil companies that used to run business in uganda-secondly, the buganda proverb goes-kyoto nalya, to kyesunga-we are already spending lavishly
Report to administrator
0 #5 Lakwena 2021-05-19 15:59
Quoting kambarage:

.. You wish. You guys are just negativists who see no good in any development not done by 'your own'. It is an understandable human trait.

Uganda is the least indebted among East African countries. No country is not indebted. This newsman is one of you confused semi-elites posturing as knowledgeable and unfortunately, with so much access to press which yo use to mislead the public into revolts and other time wasting ventures.

But Kambarage, if everybody does it, how indebted are you? And why do you think most Ugandans are so idiotic that they can easily be mislead by confused Semi elite.

If Gen Tibuhaburwa and you, mobilized some Ugandan and went to the bush, which was a revolt against Obote, what would be wrong if Ugandans revolt against your maladministration?

And Kambarage, chronic indebtedness is due to moral bankruptcy and financial managerial incompetence/indiscipline.
Report to administrator