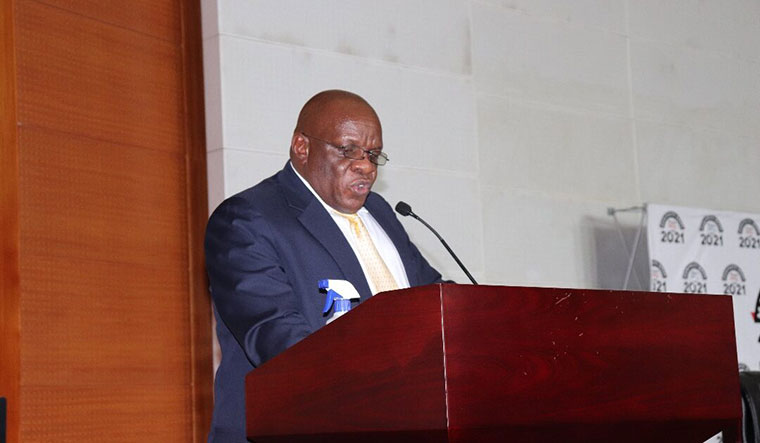 Moses Kizige, the state minister for Karamoja-Affairs reads the report to the media

After assessing itself as having achieved 95 per cent of its respective targets in the NRM Manifesto 2016-2021, the Office of the Prime Minister looks ahead to restructuring itself for purposes of scoring even greater heights.

Moses Kizige, the state minister for Karamoja Affairs, said this while presenting the report on the implementation of the NRM Manifesto 2016-2021 Commitments and the presidential Strategic Guidelines and Directives for 2016-2021 on Wednesday, May 5, 2021. The report was officially scheduled to be presented by the minister for General Duties at the Office of the Prime Minister (OPM), Mary Karooro Okurut.

“In conclusion I am happy to inform you and the country that OPM successfully met 95 per cent of the manifesto target under OPM and therefore its performance is rated at 95 percent,” the report said.

It added that the ministry of Public Service is currently reviewing OPM’s staffing structure as part of the overall restructuring process of Government as recommended in the third National Development Plan (2020/21 – 2024/25).

The outcome of the restructuring exercise will enable OPM to have the requisite staffing structures to effectively execute its mandate, and is expected to strengthen the institutional mechanisms and systems for effective service delivery of new NRM Manifesto 2021 – 2026 and NDP III.

The above will be achieved through real-time tracking of all MDAs and local governments (LGs) performance to achieve accelerated implementation of government programmes; empowering OPM to whip MDAs and LGs to attain results and inculcating a performance culture characterized by speed and rigor; and faster decision-making to facilitate investment and businesses and improved service delivery.

The OPM is a mega ministry which not only houses the prime minister who is head of government but also the Government Chief Whip, a minister for General Duties and a number of ministries.

Running under the vision, ‘A coordinated, responsive and accountable Government for socio-economic transformation’, and the mission, ‘To instill and maintain efficient and effective systems in Government that enable Uganda to develop rapidly’, OPM has a far-ranging and far-reaching mandate.

The functions of OPM are clearly spelt out as to:

The minister enumerated various achievements against the manifesto targets, starting with those concerning ‘Rehabilitation of war-ravaged/impacted areas’.

Achievements classified under ‘Combating corruption’ include:

Accomplishments under ‘Public and private sector institutional development’ include:

The OPM identified three major challenge areas: budget cuts and shortfalls; reporting and disbursement of NUSAF funds; and lack of control over the PRDP grant.