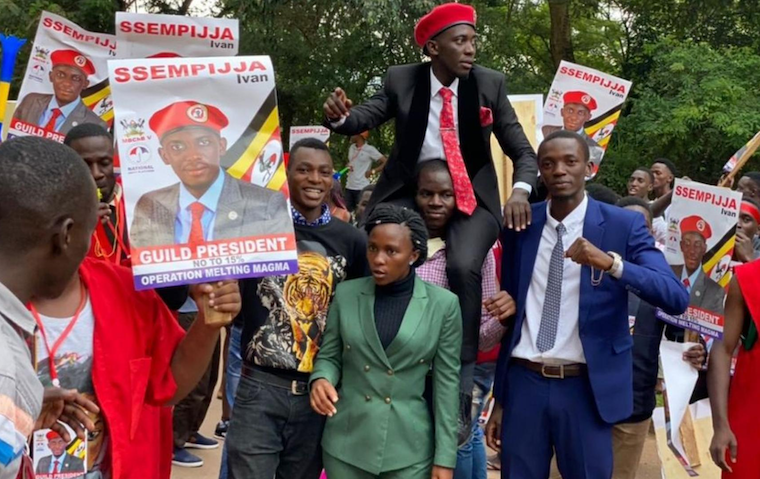 Ivan Ssempijja with his supporters earlier

In the election that was organized both physically and online, Ssempijja, a fourth-year student of bachelor of Medicine and Surgery defeated two other candidates in the race.

There was confusion before the winner was announced when the chairperson of the university’s electoral commission Jackson Twijukye failed to sign the declaration form and went away with the stamp which created tension.

According to Rodney Kiggundu, Makerere guild electoral commission public relations officer the process was free and fair despite several concerns that were raised by the students. Kiggundu however said the election was delayed by some technical glitches that disrupted the online voting, he says online voting went up to 6 pm.

Nevertheless, sooner than later, Museveni, with his loathed NRM, will fall into limbo and be part of history.
Report to administrator
+1 #3 Akot 2021-05-11 15:45
Quoting Webz:

This is a new era and generation.

Unless the new generation says NO to the tribalistic system, call tribal leaders to stand down, then to UNITY of Ugandans for common cause, Museveni & his NRM who own tax money, police/army & control every institution, are going now here!

Power to end Museveni/NRM belongs to Ugandans, but only in UNITY, the only power needed to block the demon & show him way out!

The new generation MUST understand that only bringing down the tribalistic system & UNITY of Ugandans, will give them chance to a different Uganda in which they will decide what governance they want, how they want to be governed by who & for how long!

As things are, Museveni has already won next fake election in the Uganda that belongs to him & not to Ugandans!
Report to administrator
0 #4 Akot 2021-05-11 16:14
WADADA rogers, understood, but,

Museveni is the only boss in the Uganda he rules through the divisive tribalistic system & he knows as long as Ugandans are alright with the inhuman system he so cleaverly put in place, the International Community will remain silent.

It took the International Community 20 years to understand they were supporting the worst dictator ever!

Does Museveni talk, act as if he will leave Uganda to Ugandans?

Only bringing down the tribalistic system Museveni cleaverly put in place to ensure his rule, then UNITY will block the demon & Ugandans will have chance to form the kind of governance they want!

NUP is giving Ugandans false hope, just as Dr Besigye, Kyagulanyi did!
Report to administrator
+3 #5 Lakwena 2021-05-11 16:33
In other words, the election results of what happened in Makerere last week, is the direct reflection of what happened in the debacle of the 2021 General Election results, but Kyagulanyi's victory was robbed at gun-points.
Report to administrator
0 #6 Loveuganda 2021-05-11 17:28
Not again. I remember M7 saying NUPs are dropout hooligans.

But still his NRM person came 3rd. What does it tell you. One might hang on a dead horse.

In reality the horse is dead and is asking to be buried. M7 take hint. Lying oneself puts one in dillusional state. One cannot live like that. You are making it worse for those who love the party.
Report to administrator
0 #7 Alfred B 2021-05-11 19:11
This truelly shows that all Ugandans lost love for the rulling government is just imposing itself onto them.

People want to change to something new.
Report to administrator