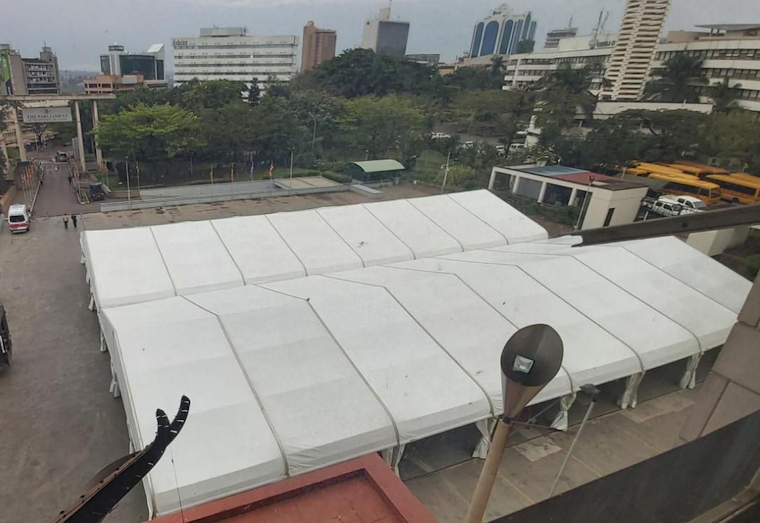 The two tents at parliament

Parliament has spent over Shs 1 billion to hire two tents being used for plenary sessions due to Covid-19 restrictions.

In March last year, parliament's sittings were shifted from the main chambers to the parking lot to observe the Covid-19 standard operating procedures. The legislature has since then been paying Shs 8.5 million daily to hire the tents.

This figure when summed up over the 11 months that the tents have been hired amounts to over Shs 1.1 billion. Parliament has had to foot a monthly bill of over Shs 102 million as tent rental costs. Parliament broke off for close to two months for elections and holidays.

According to officials from parliament, it was agreed that the parliamentary commission pays bills for only three days when the house sits that is Tuesday, Wednesday, and Thursday.

Parliament's acting director of communications and public affairs, Helen Nanteza Kawesa, the hiring of the tent was unavoidable because parliament needed to continue sitting but also respecting Covid-19 restrictions.

Kawesa says parliament plans to buy its tent in the next financial year going by the trend Covid-19 is taking. Kawesa says a 30x40 meter tent will be adequate social distancing during parliament's plenary session.

“As you are aware, we hired the tent because nobody knew if one day Covid-19 would be there or not, but also if it would take longer. So for the future, we are procuring our tent” she said on phone.

The tent, if purchased will save parliament millions of shillings that go into tent hire for different events like the end of year parties, festivals, and celebrations among others.

According to bid documents, M/S Karid Investment limited T/a Tents 4 U emerged best-evaluated bidder to supply parliament with a tent of Shs 358 million.

Other bidders like, M/S Silk Events, were unsuccessful after they failed to provide the National Social Security Fund (NSSF) clearance certificates, bid security, evidence of having made similar supplies, and submitted a transactional tax clearance certificate addressed to Uganda Revenue Authority.

+5 #1 Mike Larry 2021-05-09 22:50
This is exactly why Uganda should be ruled by decree and these foolish parliamentarians returned to their miserable villages.

Who in their right brain rents tents for 11 months at a rate of 8.5 a day? Who had this tender?

They can't even do this kind of expenditure on sick children or pregnant women in hospitals. How does the legislature get abolished should be out next big question...
Report to administrator
0 #2 kabayekka 2021-05-10 00:18
That is what seems to have been agreed by these Uganda parliamentarians and the President to provide half their wages to the cause of fighting COVID19 as the lockdown started early last year for a whole year.

Many national and international companies doing business in this country came forward to help the situation. M/S Karid investments Ltd. should come down gracefully under this program so that parliament can pay this company half the rent for the whole year.

And parliament should have the decent to thank this company for the good job it has done to save them from this terrible global pandemic!
Report to administrator
+1 #3 Lakwena 2021-05-10 12:06
In other words, Ugandans pay taxes at their own risk. Otherwise, at this rate; who needs a government.
Report to administrator
+1 #4 Victor 2021-05-10 12:13
Just asking, what is the cost of the tent? Do we have people who still care about this country?

I honestly think that had we done a cost benefit analysis, we would not be here. This is broad day light thuggery.
Report to administrator
+3 #5 Concerned Ugandan 2021-05-10 14:14
Quoting Mike Larry:

Hehehe! Mike my brother, the problem is that you think all that 8.5M a day goes to a supplier!

The most prevalent form of graft in Uganda today involves inflating the cost of supplies. Do not be surprised if as little as 30% goes to the supplier while the rest is "shared" internally!

It is also common knowledge that suppliers never charge government the way they would charge you as an individual to hire the same tents.

Reason being that you as an individual do not have corrupt procurement managers in your procurement cycle who are prepared to fail the whole procurement if they do not get their cut!

This is why for example nobody stopped to consider whether it might not make sense to simply buy the tents outright at a fraction of the cost of hiring them for a year! Its corruption! Plain and simple!
Report to administrator
0 #6 Kalibbala 2021-05-10 19:20
FAILED STATE!! ONE HITLER WITH HIS SON COMMANDING SFC/SS KILLING AND MAIMING UGANDANS !!

NO CASE TO ANSWER!! THE CURSE; KISIRAANI, AND ENEMY OF HUMANITY OWNS THE COUNTRY!!
Report to administrator