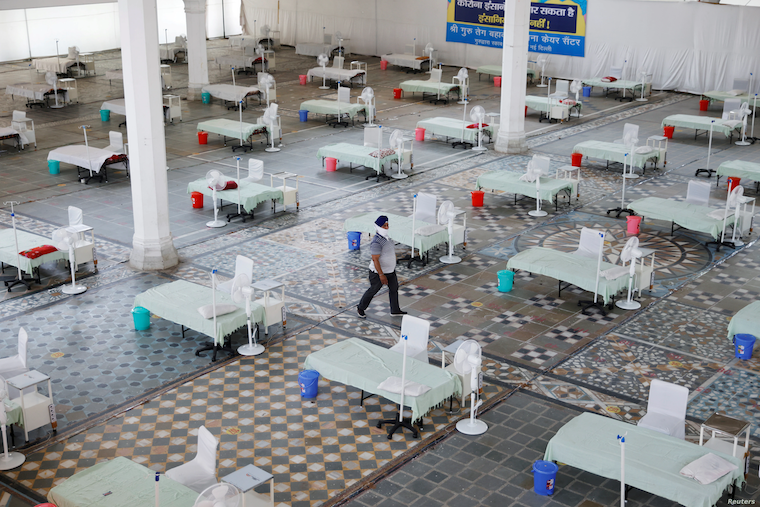 FILE - Beds are seen inside a Gurudwara (Sikh Temple) converted into a coronavirus care facility amidst the spread of COVID-19 in New Delhi, India

The coronavirus crisis is not abating in India, with the country reporting Sunday that it had counted more than 403,000 new infections and 4,000 deaths in the last 24 hours.

In addition, health experts say the tolls are likely undercounted. Indian Prime Minister Narendra Modi has not imposed a nationwide lockdown to help stop the spread of the coronavirus despite calls to do so from politicians and public health officials.

Some local governments, however, have imposed lockdowns on their jurisdictions. New Delhi has announced that a lockdown that began April 20 will be extended to May 17. The Indian capital also announced that Metro transit service will be suspended, starting Monday.

The southern state of Tamil Nadu said it would shift from a partial to a full lockdown after neighboring Karnataka state extended its full lockdown Friday.

In an interview, Saturday with the French news agency, Soumya Swaminathan, the World Health Organization’s chief scientist, warned that "the epidemiological features that we see in India today do indicate that it's an extremely rapidly spreading variant."

Swaminathan said the B.1.617 variant of the coronavirus that causes COVID-19 was clearly a contributing factor to the catastrophe in India, her homeland.

"There have been many accelerators that are fed into this," the 62-year-old pediatrician and clinical scientist said, adding, "A more rapidly spreading virus is one of them." She added, however, that large gatherings and a lapse in mask-wearing also played a role.

The B.1.617 variant was first discovered in India last October. In addition to the number of cases and deaths, Swaminathan said another danger is the increasing likelihood of variants that could outwit vaccines.

"Variants which accumulate a lot of mutations may ultimately become resistant to the current vaccines that we have," she said.

India is second to the U.S. in the number of infections. The U.S. currently has more than 32.6 million infections and 581,000 deaths, according to Johns Hopkins.

On the second day of a European Union summit in Portugal on Saturday, the EU approved a contract extension with Pfizer-BioNTech to provide up to 1.8 billion additional doses of its vaccine through 2023.

Michel and other EU leaders said the U.S. should, instead, start boosting U.S. vaccine exports to have maximum impact on the global pandemic.

“I’m very clearly urging the U.S. to put an end to the ban on exports of vaccines and on components of vaccines that are preventing them being produced,” French President Emmanuel Macron said.

The U.S., like Britain, has limited exports of domestically developed vaccines so it can inoculate its population first. The EU has become the world’s leading vaccine provider, distributing about 200 million doses to the 27-nation bloc and roughly an equal number to nearly 90 countries around the world.

Pope Francis said that he supports the temporary suspension of vaccine patents, according to news reports. He added that market forces, as it relates to the vaccines, must not predominate.