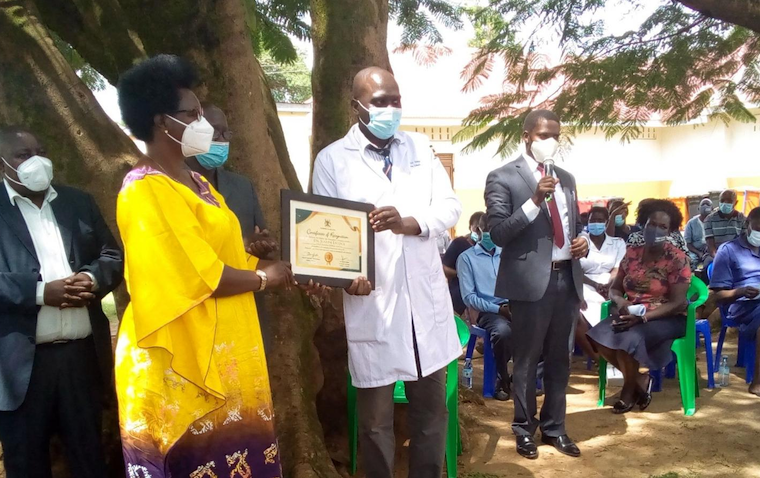 Soroti Regional Referral hospital medics who successfully separated a living conjoined twin from her dead sister earlier in March this year have been recognized once again, this time by the ministry of Health.

After delivery, one of the twins died moments after birth and remained attached to the sister for six days. During this time, doctors at Amuria health centre IV referred them to Soroti hospital, who in turn also referred them to Mulago National Referral hospital. However, they were never attended after failing to secure an appointment allegedly due to lack of money, forcing them to be returned to Soroti.

Dr Epodoi then spearheaded the operation after establishing that there was a layer of living cells separating the babies and that the twins were surviving on different body organs. The operation which was initially labelled risky and impossible was eventually successfully carried out to the amazement of the entire country.

On Friday last week, the ministry conducted a function to recognize the efforts by Dr Epodoi and the team of 13 other medics for the successful operation. During the function, both the hospital board and the ministry of Health awarded certificates of recognition to the team.

Hellen Adoa, the state minister for Fisheries who represented the minister of Health, said that the Soroti team exhibited a high level of commitment to save the twin girl, now named after Dr Epodoi.

"They decided to go beyond what they have in the hands and use the skill. It was a very big commitment but also they were able to do many other things not just this one. Because recently also they were able to pick a baby that was planted in the river. It was a very unique thing and we want to thank say thank you to this team. A new hospital is going to be built to replace this one which has been here for the last 100 years." said Adoa.

Joyce Alinga, the mother of the child commended the efforts of Soroti medics in saving her child. She notes that after the children were returned from Mulago hospital, her hopes for the survival of the living child faded but the medics performed wonders in conducting a very complicated operation.

The surviving twin who now weighs 2.1kg is in good health according to Dr Michael Muwanga, the hospital director. He added that the baby will soon be discharged from the hospital after completing the required health management. Last month, parliament also paid special tribute to the medics in a special plenary session that lasted more than three hours.

+2 #1 Mark Mugisha 2021-05-04 10:49
Such citizens are the ones that deserve a hand shake
I hope the minister brought enough ✉️✉️
Quote | Report to administrator
+1 #2 alex erejo 2021-05-04 15:14
On very rare ocassions genuine people get recognition. Wait for Heroes day, and watch the list. Very shameful
Quote | Report to administrator
+2 #3 Geoffrey Mukwaya 2021-05-04 17:29
What does this say about the quality and reliability of care provided by the National Referral Hospital at Mulago?

How can such desperate patients travel all the way from Soroti to Kampala only to be turned back (without any care) back to Soroti? What a shame for our country.
Quote | Report to administrator
Refresh comments list
RSS feed for comments to this post
Add comment