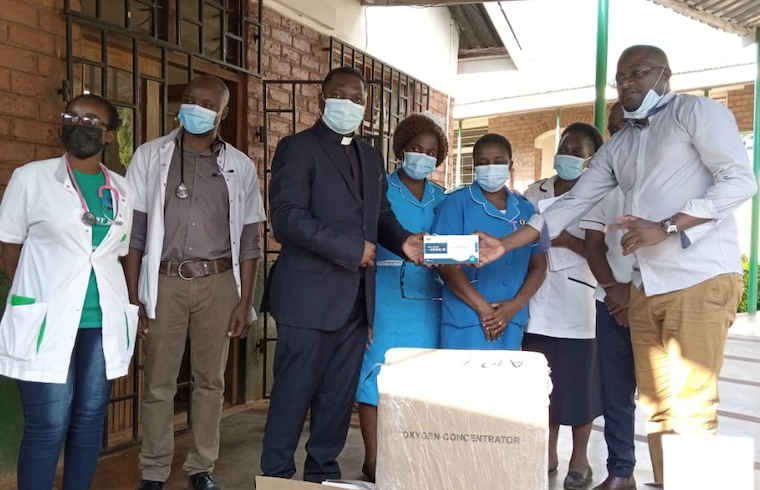 A citizen-funded COVID-19 effort in Malawi has received an award from Britain's Queen Elizabeth for its work fighting the coronavirus pandemic.

The queen said the initiative shows the utmost transparency in the use of its privately raised funding. Malawi’s COVID Response Private Citizens Initiative started in January, when the country’s hospitals were overwhelmed with coronavirus patients and lacked resources at the peak of the second wave of the pandemic.

Public hospitals were in short supply of oxygen cylinders, concentrators, diagnostics kits and other equipment essential to treat COVID-19 patients.

Dr. Thandie Majenda Hara, deputy lead organizer for the initiative, said, "At some point we had a patient who literally went to Kamuzu Central Hospital and put up an SOS on his Facebook page saying that, apparently, they did not have enough flow meters, so he couldn’t have access to oxygen, as well as patients that were in the ward with him. And it was that particular cry for help that was a trigger for what in the end became this initiative.”

She said the group spearheaded a crowdfunding campaign that raised $286,000 to buy oxygen cylinders, ventilators, personal protective equipment and other items most needed in public hospitals.

“The people that actually came together to donate here were not people who had extra cash to spend," Hara said. "We had primary students; we had people [from] as far away [as] Australia, Chitipa, Nsanje [districts], everywhere. People were committed to doing something about the lot.”

In Britain, in a press release Friday, Queen Elizabeth said the award was given in recognition of the initiative's transparency, accountability and efficiency.

The Commonwealth Points of Light award was given at a time when police in Malawi have arrested more than 64 government officials after an audit revealed misuse of $8 million in government funds allocated for the fight against COVID-19.

Police said some of the suspects were out on bail facing charges including fraud, theft by public servant and abuse of public office. In a statement this week, police said detectives were still investigating and more arrests would follow.

David Beer, the British high commissioner in Malawi, said the award was a token of appreciation for what Malawi’s citizen-driven COVID-19 response initiative had done.

“The award on behalf of the queen, you know, is very much because the group, eight of them, has done such an astonishing job," Beer said. "This initiative is having incredible effect — not the amount of money they have raised, but what they have managed to do with it, and we want them to have recognition.”

Health rights campaigners said the award would send a message to those in charge of COVID-19 funds that good work pays.

Hara said the award was not something the team expected.

"We never really went out to gain the award," she said. "We are very, very happy; we are very proud that the initiative has been recognized. So, for us the award isn’t really about the team. It’s not about any of us. It’s about the amazing response Malawians gave in a time of the crisis.”

0 #1 kabayekka 2021-05-04 13:15
Many African political leaders holding AK47 well strapped on their shoulders, who are greedy for power, would not like such initiative especially if it originated from inside their country.

Many more citizens of African origin know well why they can end up loosing their lives just like that if they try to look too brainer. Kwepankapanka no Lugezigezi!
Quote | Report to administrator
Refresh comments list
RSS feed for comments to this post
Add comment