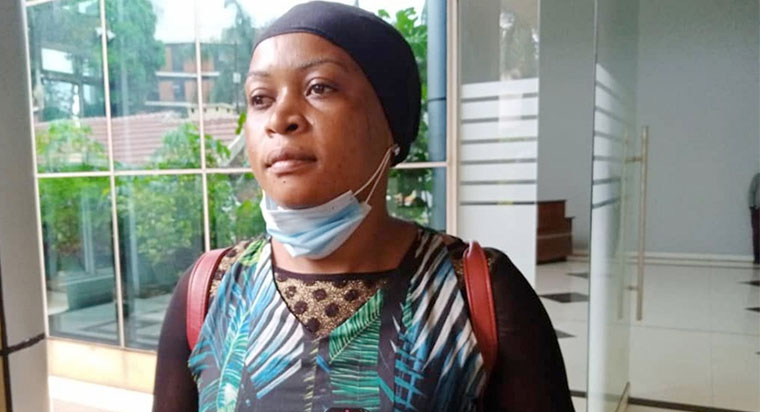 Hajara Nakitto at the High court

Hajara Nakitto, the mother whose 15-year-old son was shot and killed during the November 2020 riots has sued the government, seeking compensation for the loss.

Her son, Amos Ssegawa was shot dead on November 19, 2020, as the police and army violently quelled protests that followed the arrest of then-presidential candidate Robert Kyagulanyi Ssentamu during a campaign rally in Luuka district. It was reported that up to 54 lives were lost in the protests during the two-day protests that started on November 18.

In the aftermath, President Yoweri Museveni said that the government would compensate all families of those who were killed during the city protests once it was proved that they were not rioting. According to Museveni, among those killed, 32 were rioters and 22 were victims.

However, Nakitto, a resident of Kinoni town council in Lwengo district narrates that her son, then a senior two student at Lubiri High school was shot by soldiers dressed in the Uganda Peoples Defence Forces (UPDF) uniform who zeroed on him at Cornerstone plaza in Kampala, while he tried to escape the chaos in town.

Nakitto, who was walking alongside her son, moments after closing her shop amidst the chaos, recalls that the soldiers who were travelling in a green military police vehicle from Mengo started shooting aimlessly and within a few minutes, her son was bleeding profusely.

The sight of her son lying in a pool of blood evoked her emotions, and all she remembers is seeing a local television journalist Joseline Nakibuule seated with the boy on a boda boda rushing to Mengo Doctors clinic where he was pronounced dead on arrival. Without going through the formalities, the family went ahead to bury the deceased.

But after reporting the case to the police, she was advised that they needed to conduct a postmortem to ascertain the exact cause of death. The family exhumed the body, which was then examined by a police pathologist, Dr Moses Byaruhanga at a cost of Shs 60,000. The postmortem indicated that Segawa had succumbed to neurogenic shock resulting from head trauma.

According to Nakitto, since then, she has approached the police in pursuit of compensation in vain. One of the officers reportedly advised her to go through the courts. She adds that her son's death shattered her life and her employer allegedly stopped her from working due to the endless movements she makes while seeking justice. Nakitto also states that her daughter, Jovia Nagawa is equally traumatised, yet she can no longer afford her school fees having lost her source of income.

Her lawyers led by Abubaker Matanda have told URN that they now want the High court to declare that the death of Nakitto’s son was unlawful and the government should be ordered to compensate her for the damages as well as costs of the suit. They did not specify the amount needed in compensation.

"We have supported miss Nakitto to file a case. Miss Nakitto unfortunately is one of the victims of the inconscience and reckless actions of the security agencies on the 19th and 18th November last year. She, unfortunately, lost her son Amos Segawa, a 15-year-old in senior two at Lubiri high school. What she seeks, in this case, is compensation. We know that compensation cannot atone for a life but her life has been shattered, her family has been greatly disturbed and we think that compensation can enable them to recollect themselves. We have approached court as the last resort for her to get justice," said Matanda.

Last week, Nakitto staged a lone protest outside parliament demanding justice and the speaker of parliament Rebecca Kadaga promised to support her to access justice.