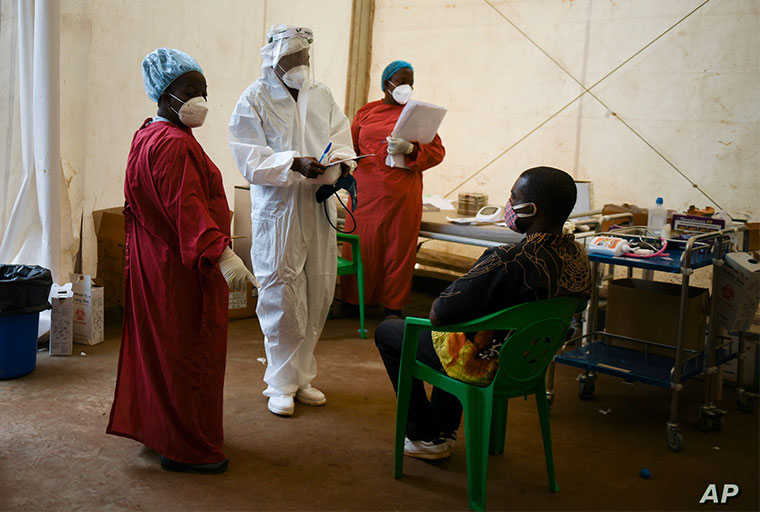 FILE - A COVID-19 patient, right, is seen to by health workers at Queen Elizabeth Central Hospital in Blantyre, Malawi

Malawi's President Lazarus Chakwera has fired his Labour minister and arrested 19 officials for fraudulent use of funds meant to fight the coronavirus.  The arrests came after an audit revealed Malawi officials used millions of dollars in funds for their own expenses.  Political analysts say the firing was less punishment than a means to deter other fraud.

Labour minister Ken Kandodo is the highest-level official that Chakwera fired for misusing coronavirus funds. According to a government audit, Kandodo used less than $800 from the COVID fund for allowances during an October trip to South Africa with Chakwera.

When contacted Monday, Kandodo refused to comment on the matter.

In a televised national address Sunday evening, the president said the firing, and arrest of 19 other officials, was to show that no corruption would be tolerated.

“Even though the minister has since returned the money, his usage of the funds means that the money was unavailable for its intended purpose when it was needed most. And I cannot have in my Cabinet any individuals who either spend money budgeted for one thing on something else or do not ask tough questions to ensure that the money they are spending on something was budgeted for that purpose,” he said.

Visibly angry, Chakwera warned that anyone connected to fraudulent use of the $8 million fund would face consequences.

“So, I want all the thieves hiding in the civil service to mark my words: If the finger of evidence points to you as one of the thieves who stole COVID money for saving lives while hundreds of our people were dying of COVID, you are going to prison," Chakwera said.

A Malawi police statement released Sunday night said those arrested would face charges, including “theft by a public servant,” and could be punished with hard labour if found guilty.

Despite the small amount of money, and Kandodo’s refunding it, critics of corruption say his firing sends the right message. Blantyre International University political science lecturer Sheriff Kaisi says it should help to deter official fraud.

“What has happened is commendable job that the president has begun. But to me it’s an indication of the huge task that befalls the president to accomplish what he has just started yesterday as far as this fight against corruption and malpractice on government resources is concerned,” he said.

In February, Malawi’s president fired 28 heads of district councils for abuse of the $8 million COVID fund. Chakwera on Sunday also suspended pay for all officials connected to the abuse of funds and said that disciplinary proceedings should begin within two weeks.

What happened to billions of COVID-19 funds. I remember hearing DR. Atwine saying the diverted some money to save ugandans by not following normal procedures of purchasing.

That was wrong. Even today not every Ugandans received food leave alone masks. We need accountability by the government and public servants.
Report to administrator