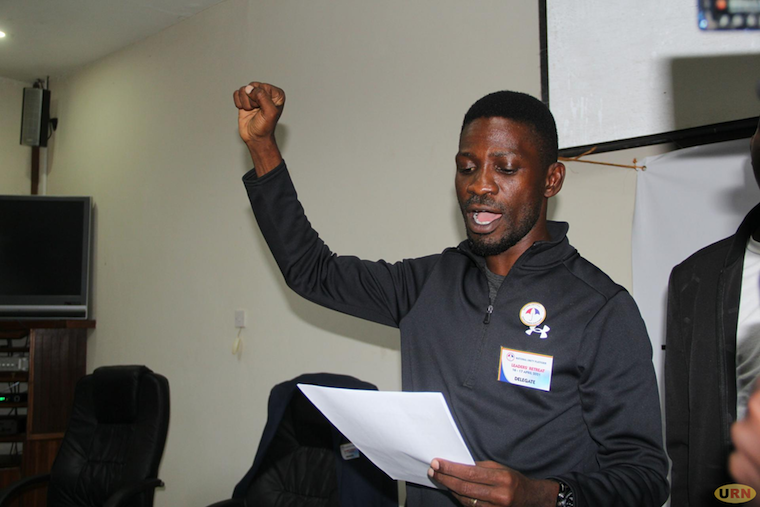 Newly elected leaders of the opposition National Unity Platform (NUP) have taken an oath to defend their electorate against human rights violations and fight corruption which they claim foster poor service delivery in the country.

While closing their two-day retreat at the Jinja based Nile Resort hotel on Saturday, the NUP leaders resolved to adopt the oath as a working document for all leaders throughout their political tenures. Led by NUP president, Robert Kyagulanyi, the leaders also passed seven resolutions, which will foster the continued transformation and visibility of their party throughout the country.

These include saluting Ugandans for their support towards NUP candidates at the presidential, parliamentary and local government levels, commitment to the struggle against President Yoweri Museveni’s rule, using their political positions to further struggle for freedom and democracy, upholding the values of NUP and serve Ugandans diligently.

The others are that all leaders submit their thoughts to their party’s constitutional review committee, selection of committees of parliamentary and local government units to resolve on whom to support for both speakership and deputy speakership positions and traversing different parts of the country.

NUP party spokesperson, Joel Ssenyonyi, who addressed journalists shortly after the retreat, said as a structured political party, they will continue to engage in activities aimed at awakening the population on their abilities to raise up against human rights violations.

He said that they have also drafted plans of commissioning new party offices throughout the country with the aim of updating citizens about their activities.

"We resolved to have a countrywide tour by our president, the honourable Kyagulanyi Ssentamu Robert and other leaders, thanking Ugandans for the massive support that they showed us. We’re a fully-fledged political party and so that is allowable within the law - to go across the country, connect with people. With time, we shall also be opening up offices in various parts of the country because we’re a registered political party," said Ssenyonyi.

Jinja city mayor-elect, Peter Kasolo challenged the other leaders to desist from ethnic divisions, saying it has the potential of overshadowing the party’s core principles and keep other people from joining their party.

NUP enjoyed overwhelming support in central and eastern Uganda, winning the majority opposition local government and parliamentary seats. NUP also claims to have won the presidential election, but Kyagulanyi withdrew the election petition that he'd filed before the Supreme court to overturn Museveni's election victory citing bias by the judges.

Kyagulanyi also challenged the NUP leaders to avoid lavish lifestyles, which he says might endanger their relationship with their voters, saying that they were elected due to their humility and pledges for improved service delivery.

He warned that if they choose luxurious lifestyles, they might be compromised to ignore the core principles for which they were elected into their respective political offices.

He cautioned the leaders against purchasing expensive vehicles in the name of fitting into their new political offices but rather strive to address the need of their electorate to have a free society, which can enable them to access economic and political freedom.

Kyagulanyi urged the leaders to put their money to good use by investing in developmental projects, which will boost the livelihoods of their electorate, saying it will not only liberate them from poverty but also lay a foundation of liberating them from political bondage.

Kyagulanyi stressed that despite the challenge of monetized politics, which frustrated several candidates from winning political seats in different parts of the country, most successful NUP candidates were supported emotionally and financially by their electorate and now carry the responsibility of addressing their challenges above themselves.

Jimmy Lwanga, the newly elected Njeru Municipality MP, says that his constituency is grappling with high levels of unemployment and plans to divert part of his salary towards empowering youth and women through the provision of startups.

The Jinja Woman MP-elect, Manjeri Kyebakutika says several people have approached her for financial aid ever since she was elected. She has also committed to dedicating part of her emolument from parliament towards catering for the welfare of her electorate.