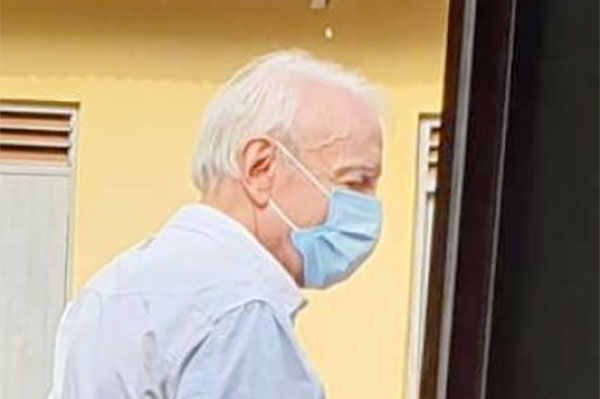 Diego Marino Enrico, a retired Italian diplomat is in trouble after being found in possession of over 5 kilograms of ivory.

A team of detectives from Bugolobi police station in Kampala picked up Marino on Tuesday following a search at his residence in Panda–Pier Village in Nakawa Division that yielded the ivory and transferred him to Jinja Road police station.

Marino’s arrest came a day after his Ugandan wife was detained at Bugolobi police station together with Panda–Pier village LC I chairperson, Joseph Tomusange, who was caught with 2.5Kgs of worked ivory pieces following a trap laid by officers from the Natural Resources Conservation Network (NRCN) working closely with detectives from police who presented themselves as buyers of the ivory.

During interrogations, Tomusange led the detectives and NRCN officials to Marino’s home where a search was conducted leading to the recovery of 3.75Kgs of worked ivory pieces. Over the weekend, an officer from NCRN received a tip-off indicating that there was someone in Luzira with some ivory pieces for sale. The officer immediately informed the police about the development.

On Sunday, the officers of the NRCN, with police met their informer, who showed them the ivory in a hidden sack. On confirming that the items in the sack were genuine ivory pieces, the detectives immediately introduced themselves to Tomusange and arrested him. They demanded that he takes them to the source of the ivory.

He led the detectives to Marino’s residence where a stand-off ensued between the detectives and his caretakers who denied them access. The caretakers released a guard dog in the ensuing struggle, which bit and injured one of the detectives on the left arm, before it was eventually subdued. In his statement at Bugolobi police station, Marino did not deny that he was the owner of the ivory pieces but said that he bought them several years ago from an unidentified hawker.

“I don’t sell ivory. I have been here for over 10 years. I bought these things from a hawker here in Kampala”, Marino told detectives in Bugolobi.

James Mutaire, the officer-in-charge of investigations at Bugolobi police station confirmed the suspect’s arrest and transfer to Jinja Road police station. He said they had preferred the charges of unlawful possession of specimen of protected wildlife contrary to Section 36 (1), and Section 71(1)(B) of Uganda Wildlife Act and Unlawful Transfer of Specimen of Protected Species contrary to Section 36(1) and Section 71 (1)(B) of the Uganda Wildlife Act."

On Monday, a team of experts from the Uganda Wildlife Authority (UWA) joined the officers from NRCN to help with the identification and prosecution of the suspects. In her April 13, 2021 six-page technical report, Sgt Maj Harriet Twinamatsiko noted that she had confirmed that the 5.5Kgs of specimens handed to her by the police were actually of protected wildlife.

UWA spokesperson, Bashir Hangi told URN that they welcome the efforts of sister agencies to stamp wildlife traffickers. He said those trading in protected species need to be locked up irrespective of their species because Ugandan laws are clear. African Elephants are listed under Appendix 1 of the Convention of International Trade in endangered species of wild flora and fauna (CITES) and described as endangered by the International Union for Conservation of Nature (IUCN), which means that no trade is allowed in these species and their parts.

In her report, Twinamatsiko says that in terms of economic and biodiversity value elephants and hippopotamus are among the key drivers of Uganda’s tourism potential internationally.

“They are listed among the “Big Ten Safari Animals” which shape the decision of tourists to choose their tourism destination, and are instrumental in tourism marketing purposes. As one of the flagship animals in the tourism sector in the country, they greatly market, stimulate and contribute to the number of tourists we receive in the country. You will note that tourism tops Uganda’s foreign exchange earnings, and for the financial year 2018/2019, tourism generated $1.6bn equivalent to Shs 6 trillion,” Twinamatsiko said.

It is unclear when Marino and his group will appear before the court as officers at Jinja Road police station remained tight-lipped on the matter. The deputy Kampala Metropolitan police spokesperson, Luke Owoyesigire, said he was yet to receive information on Marino’s arrest. Police spokesperson, Fred Enanga didn’t respond to our repeated calls to his known mobile phone number.

I dont believe this story, somebody is vying doe anther's wealth, it is some form of conspiracy, its a set up and i believe the Italian guy's wife is behind the scheme to get the guy deported.

I think you are right.
Reason for this is obvious.
Report to administrator
0 #4 sant 2021-04-19 12:10
Please don't be deceived, this is just a deal as usual by the rangers. That's how they give and recover the specimens and if you link or disclose them, this officers will even lock you more.

this is just a game from UWA members. it is the same game played to some guy from Kalongo, Agago District because he tried to disclose them and he was transfered up to??? for mentioning of the case. 2m shared.
Report to administrator